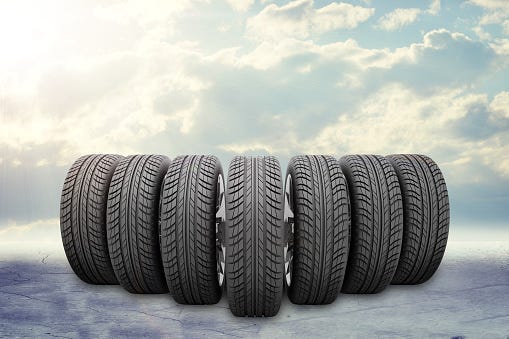 If you don’t know how to fix a flat tire, then you better have roadside assistance.

But in the future, you won’t need either, as technology is currently in the process of taking tires to a whole new level.

According to CNBC, companies are now working on making tires that know how to fix themselves, are either airless or made from rubber-free sustainable materials, or might even be able to talk to you in the future. Alexa, say what?

Road trips are supposed to be about changing scenery — not changing tires. Which is why we developed MICHELIN® Selfseal® tires: Seals 90% of tread punctures up to a quarter inch in diameter. Learn more: https://t.co/CVX6YZ3Ad1 https://t.co/kAt11r4edt

Leading the way with the technological advancements are tiremakers Continental and Michelin, who have both created self-fixing tires that release a natural rubber sealant material that can repair a leak or a puncture up to a quarter of an inch in diameter.

Apparently, it works so well that a driver may not even notice they’ve run over a nail. Michelin has perfected their model and will start offering SelfSealant tires as a factory option beginning with the 2020 Ford Explorer.

Continuing with their innovative spirit, Michelin has also developed a tire prototype that doesn’t require any air at all and so it can’t get a flat in the first place.

Thanks to our #UPTIS solution, a very significant volume of material will be saved from being wasted. Other benefits explained here: https://t.co/DGYnu4TDF4 pic.twitter.com/lzxGAwRRRK

Entitled Uptis, the tires do not have the traditional sidewall. Instead, they carry their load from the top via a resin-embedded fiberglass material that the company has patented. Michelin is currently collaborating with General Motors to road test the tires on Chevrolet Bolt EV hatchbacks.

If all goes as scheduled, the Uptis tires will be ready to go into production on passenger vehicles beginning in 2024.

Now that we’ve gone without air, how about getting rid of hard to recycle rubber tires? Once again, Michelin is taking charge and has made it a priority to replace 80% of the rubber it uses with more sustainable materials.

The length of time it takes to grow a dandelion vs a rubber tree is significantly less. Continental is utilizing Russian dandelions to produce tires. #EarthDay pic.twitter.com/7RcxtjwCFv

Meanwhile, Continental has already started working on an environmentally friendly alternative that uses dandelion roots to make a rubber replacement called taraxagum. They recently did a test run of taraxagum tires on a fleet of trucks and buses and the results were said to be “extremely promising.”

As for talking tires, the technology is still a ways away from being a reality. But industry experts are confident it won’t be too long until tires will be able to alert drivers when they run into things like potholes, gravel, snow or black ice. The idea is that it would give the driver time to slow down or come to a stop before any damage occurs.