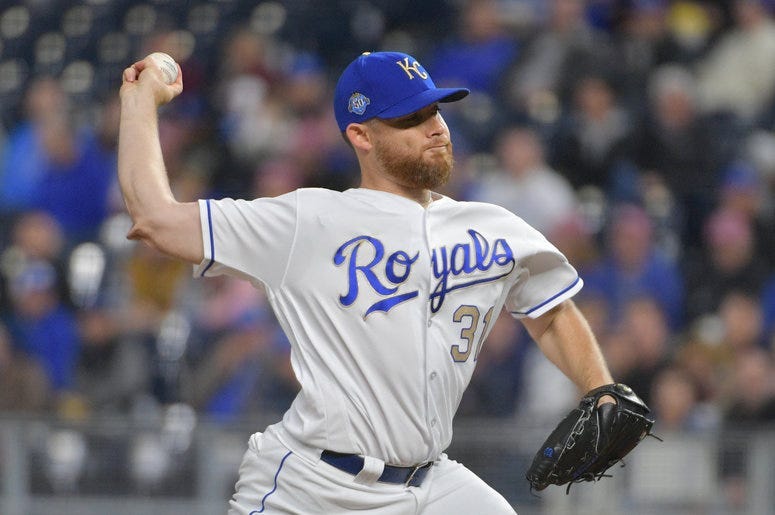 Ian Kennedy to the bullpen

Ned Yost confirmed today that Ian Kennedy will be heading to the bullpen for the Royals to start the season despite brushing off his relief appearance on Sunday.

Kennedy talked to us early on in spring about the possibility and seemed open to the idea but he wanted it to be an a high leverage role.

He hasn’t pitched out of relief in a decade and he recounted it for us. Saying he was called up late in the season to give Joba Chamberlain some relief around the time they were limiting his innings. Kennedy wasn’t even expected to get called into action that day but said when the bell rang, he got up as fast as possible.

Kennedy said today he has been preparing like both were possible and is getting his head around being in the bullpen.

Ian Kennedy talked about the switch to the pen and how to prepare. His velocity was up in the bullpen the other day pic.twitter.com/rI4RpAqh5K

He also said that he has already reached out to several players who have made the switch for advice, including Holland and Hochevar. He also said he plans to reach out to Wade Davis for some pointers as well.

Kennedy also said he has reached out to several guys to see how they handled the switch including Holland and Hochevar. Has plans to talk to Wade Davis as well pic.twitter.com/kbVaXlNh1Z

If you are wondering how this means the rotation is shaking out here is my guess.

Duffy won’t be ready until a few weeks into the season but they won’t need an extra rotation arm until April 10thor so.

Ned broke down his schedule for us but started with Ian Kennedy here. I know this is lengthy but there is a lot of good information on how the roster is shaking out.

For now my guess would be that they carry an extra bullpen arm just in case and send him down when Duffy is ready. My guess for that final bullpen spot would be Ynoa at the moment but I still think they are trying to see how it plays out.

Bailey hasn’t impressed me honestly, but Ned has been saying positive things about him which could be a sign that he fits in. Starting him with the big league means you get to keep inventory at starter in AAA as well because you can stick Fillmyer down there with Blewitt when the time comes for another starter.

The Royals are thin in the rotation for sure, but it does have nice upside. I think we saw what good Brad Keller looks like during the 2018 season and there continues to be very good upside with both Lopez and Junis in the rotation. Salvador Perez once said that Lopez had the best stuff on the entire staff.

The other roster moves today shouldn’t come to a surprise even with the slow start from Brian Goodwin. I know some were clamoring for Bubba Starling to get the nod in RF but it was always going to be Goodwin. Phillips needs regular at bats and needs some more time to discover his hitting stroke again and after the Royals traded for Goodwin last year, and he performed, they were going to give him the best crack at that job.

I wouldn’t rule out a roster move either before the season but for the most part you can take a good guess at what 98% of the roster will be at this moment.

I was rooting for Richard Lovelady to finally break through, but he hasn’t been lights out this spring. He has been good but Kennedy going to the bullpen makes it more crowded for him and they continue to wait to give him the call. They are still very high on him but his time will have to wait. I still think he will be first up if there is an injury, and his time should be soon.

To stay up to date on this and more make sure to always follow us on 610sports.com