Among other records, Barry Bonds is baseball's all-time leader in home runs, walks and intentional walks, while also owning the single-season marks in all three categories.

Baseball's all-time Home Run King was recently asked in an interview with New York Mets star Dominic Smith which of his records is least likely to be broken. The seven-time MVP (also a record) initially joked that he knows "a couple of them that ain't gonna be broken," before settling on one as the least likely to be topped.

"[I think single-season] on-base percentage...ain't nobody gonna top that on-base percentage," Bonds said with a smile. "That's my No. 1 thing about hitting is that if your on-base percentage is high, everything else is high...take that walk. My friends say 'People always say what kind of teammate you were.' I say 'I was a good teammate. I may not have been a personal person in the locker room, but on the field, I was a great teammate."

Bonds' .582 on-base percentage in 2002 is the second-highest mark in MLB history. Ted Williams' .553 mark in 1941 is the closest to either of Bonds' marks. In the pandemic-shortened 2020 season, Juan Soto led baseball with a .490 on-base percentage. Soto, who some have compared to a young Bonds, literally played in 100 less games than Bonds did in 2004, and his on-base percentage was still more than 100 points lower.

There's a debate to be had about whether anyone will ever top Bonds' mark of 762 home runs, but considering Hank Aaron hit 755, you can at least fathom someone eventually seizing the crown. That said, Bonds' single-season on-base percentage is among multiple records that he owns which not only will never be topped, but probably won't even be approached. 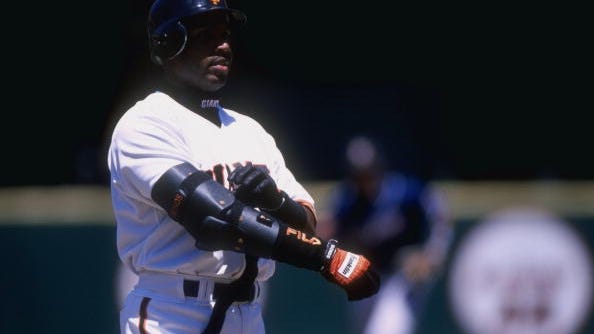 Barry Bonds on bases-loaded intentional walk: 'I was shocked at first'