“I feel fantastic,” Kittle said (via ESPN). “Fantastic. Not an issue at all.”

But Budda Baker, the Cardinals safety who tackled Kittle on the play that left the tight end hobbled, also needs to receive his fair share of sympathy right now.

Baker shared an extremely disturbing, insensitive, malicious -- and every adjective in-between -- message from an apparent 49ers fan on Instagram.

What was additionally disturbing to me was the relative calmness with which Baker took the message, which makes me think that it, a) couldn't have been a first-time occurrence, and/or b) it isn't something a player feels comfortable responding with outrage to, like I would.

“(I’m) all good with opposing fans talking trash,” Baker said in the tweet. “But (this) right here man… All you can do is pray for (people) like this.”

Literally Got A Inbox Full Of These.. but If we say something back that’s too much. Crazy World , Gotta Stay Prayed Up 🙏🏿💯💯 https://t.co/bAbAbECeiR

The last thing Baker deserves to think about right now is a message like this, especially after an upset win over the division-rival Niners thanks to his phenomenal 15-tackle performance, one that reset his career-high in that category.

With social justice efforts reaching never-before-seen highs in 2020, including messages on helmets and in end zones, pregame moments of silence/unity, and league-wide efforts to make up for past fails, Baker’s post serves as a reminder that racism is as prevalent as ever.

Read more on RADIO.COM Sports about several social justice displays around the NFL during Week 1 of the 2020 season. 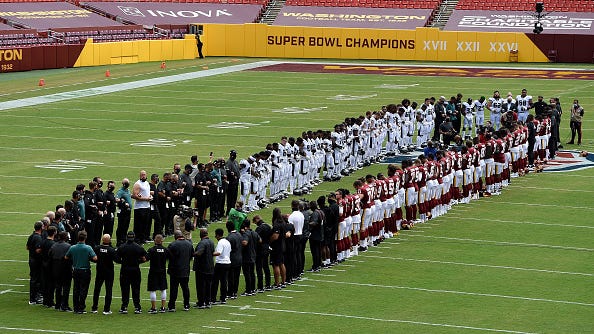