One of the faces of the NFL over the past 20 years will face one of the heirs apparent to his crown this week.

With Tom Brady and the Tampa Bay Buccaneers set to take on Patrick Mahomes and the Kansas Chiefs in Week 12, Mahomes was asked about the prospect of facing legendary counterpart Tom Brady -- he of six Super Bowl titles, three MVPs and three All-Pro nods.

Always seeming to say the right thing at the right time, Mahomes played the humble card and deferred to the veteran Brady. 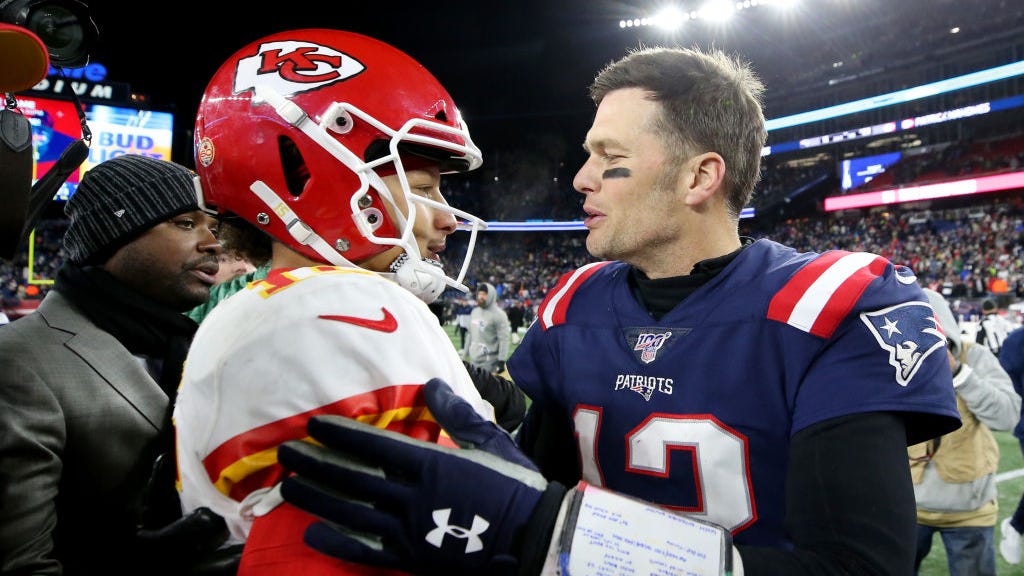 Patrick Mahomes on where he'll be at Tom Brady's age: 'Plan is to still be playing football'

Mahomes, of course, is no slouch himself at just 25 years age, with an MVP and Super Bowl title of his own under his belt.

The Texas Tech product has a ways to go before his trophy case is as stocked as Brady's -- but based on separate comments he made this week, he might eventually get there.

Mahomes hopes to play well into his 40s, a la Brady, he revealed during his weekly appearance on The Drive on 610 Sports Radio in Kansas City.

The quarterbacks have squared off three times in their careers, ESPN reported, with Brady emerging victorious twice -- including in the thrilling 2018 AFC title game.

Mahomes says he won't soon forget what Brady told him after that fateful matchup.

"He just grabbed me after the game," Mahomes said. "I was kind of leaving the stadium, and they had obviously been celebrating going to the Super Bowl. He just talked about how he respected how I did everything the right way, and stuff like that. It's just cool to have a guy of that stature who's won championships it seems like year in and year out that has respect for your game as much as you have respect for his. It was definitely a cool experience that I was able to know that I was doing things the right way early in my career."