With the No. 5 pick in the 2020 NFL Draft, the Miami Dolphins had the choice between former Alabama quarterback Tua Tagovailoa and former Oregon quarterback Justin Herbert.

After one season, it appears they may have made a colossal mistake.

Tagovailoa wasn't a disaster, throwing 11 touchdowns to five interceptions in 10 games. Of the nine games that Tagovailoa started, the Dolphins went 6-3. The problem is he was twice replaced by Ryan Fitzpatrick, with Dolphins coach Brian Flores deciding on multiple occasions that the veteran gave the team a better chance to win than Tagovailoa.

The issue for the Dolphins is that Tagovailoa felt much more like a game manager than a difference maker. That's a stark contrast with what No. 1 overall pick Joe Burrow and, more pertinent in this case, Herbert showed in their rookie season.

The Dolphins never had a chance to select Burrow, so if he ends up being an elite quarterback, it is what it is. They did have the opportunity to select Herbert, who won the Offensive Rookie of the Year after tossing 31 touchdowns and racking up over 4,300 passing yards in his first NFL season.

We would caution, it takes multiple years to properly assess draft prospects. However, in our 2020 redraft, Tagovailoa falls out of the first round, an indictment of what his upside appeared to be in his first NFL action: 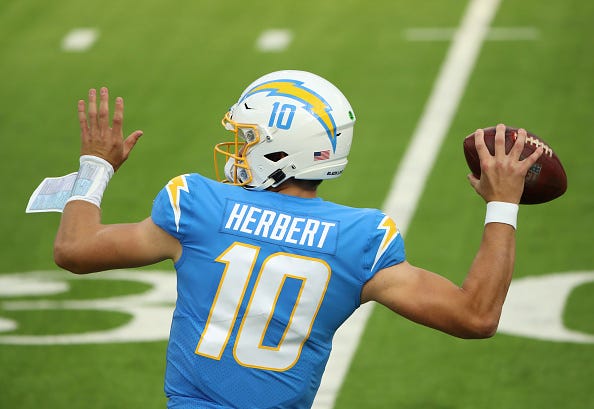 Even before Burrow suffered a season-ending torn ACL, there was a legitimate debate to be had about whether Herbert was outplaying him. The reality, though, is that if you gave NFL executives the chance to pick any quarterback in the league, both Burrow and Herbert would be among the first 10 taken. Burrow appeared to begin to change the culture in Cincinnati, so for now, we'll leave him at the top spot. From here, though, we'd lean Herbert over Burrow long-term.

Chase Young looked like perhaps the most complete player in the draft class in his rookie season with The Washington Football Team, recording 7 1/2 sacks and four forced fumbles en route to winning the Defensive Rookie of the Year.

Still, Washington has a hole at the most important position, so in our redraft, we have them passing on Young in favor of Herbert. The Lions - who got very little from cornerback Jeff Okudah in his rookie season - would have loved for things to play out that way. 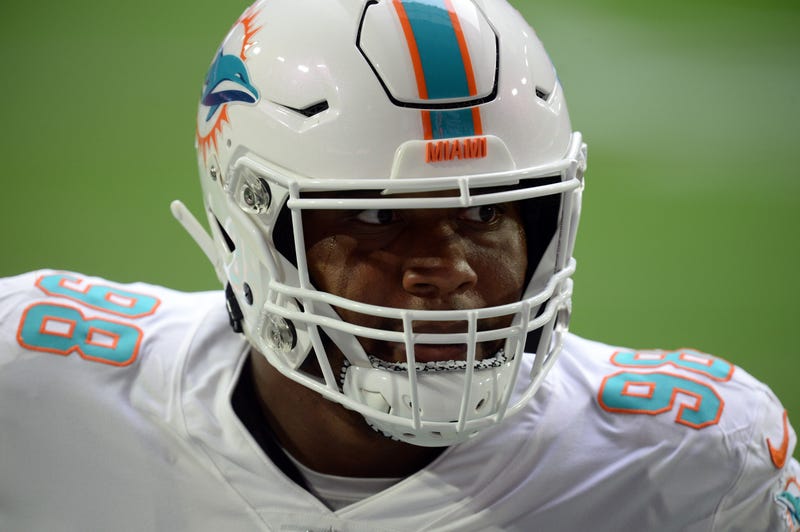 With the No. 10 pick in the actual 2020 NFL Draft, the Browns selected Jedrick Wills Jr., a left tackle. While Wills would get high marks for his acting alongside Baker Mayfield in Progressive commercials, Pro Football Focus graded him as the fifth-best primary offensive tackle in the 2020 rookie class.

Instead of taking Wills, we have the Browns drafting nose tackle Raekwon Davis with the No. 10 pick. Davis was the 56th overall pick in the NFL Draft out of Alabama. In contrast to Wills, Davis graded out as the top interior defensive lineman in the 2020 rookie class. 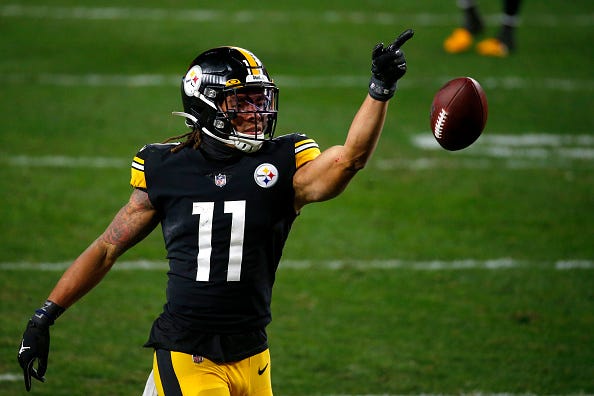 Despite playing in an offense that increasingly struggled to move the ball down the field as the season went on, Chase Claypool had 62 catches for 873 yards and nine touchdowns in his rookie season. In the team's Week 5 win over the Philadelphia Eagles, Claypool, who played collegiately at Notre Dame, had four total touchdowns. With Mekhi Becton off the board, the Jets land Claypool, who looks like a budding superstar.

The Las Vegas Raiders attempted to add juice to their offense by taking Henry Ruggs III with the No. 12 pick in the actual NFL Draft, but the speedster had just 26 catches in his rookie season. With the chance for a mulligan, the Raiders instead take CeeDee Lamb. Despite the Dallas Cowboys losing Dak Prescott in early October, Lamb still had 74 catches for 935 yards. Mind you, he did this in an offense with Amari Cooper and Michael Gallup also competing for targets.

At No. 13, the 49ers become the second team to land a player that they actually drafted in real life. However, the 49ers traded up to pick No. 25 to select Aiyuk out of Arizona State in real life. He flashed enough explosiveness in 12 games in his rookie season that the 49ers can't afford to wait until their second selection to take him in our redraft. 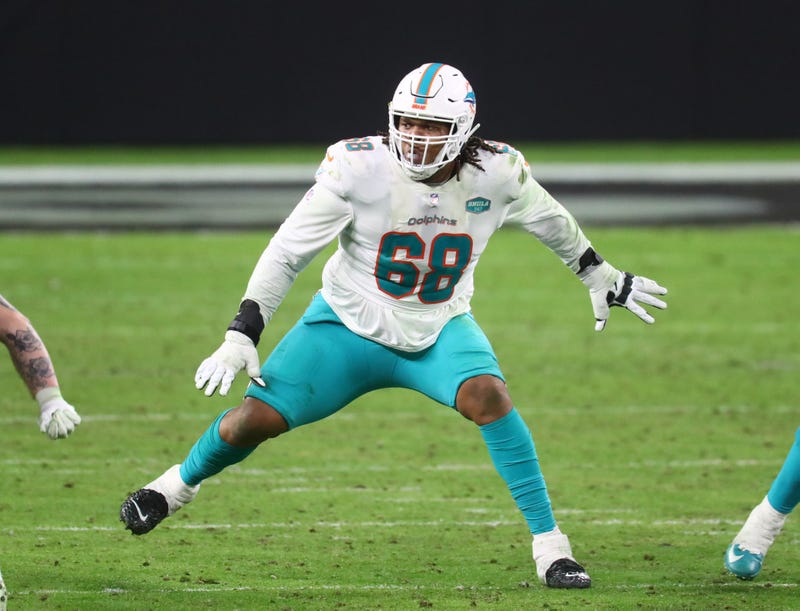 At the height of his powers, Tyron Smith was a Hall of Fame-caliber player. However, the two-time All-Pro played in just two games this past season and hasn't played in a full 16 since 2015. Smith is under contract through 2023, but considering releasing him would save over $5 million against the cap in 2021, it's hardly a guarantee he returns to Dallas for an 11th season.

Even if Smith is back in 2021 - probably the most likely scenario - it's clear that he's nearing the end of his career. Robert Hunt was taken by the Dolphins with the 39th overall pick in the 2020 NFL Draft, and Pro Football Focus says that he actually outperformed three first-round picks; his Dolphins teammate Austin Jackson, along with Jedrick Wills Jr. and Andrew Thomas. His selection would help to rebuild a once-elite offensive line in Dallas. 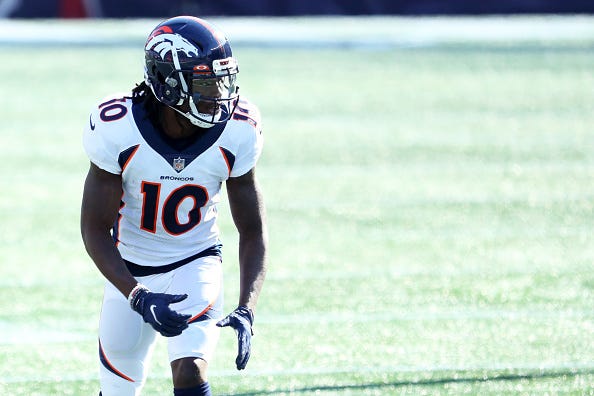 By now, you've probably seen the video of how ecstatic the Vikings war room was when the Eagles passed on Justin Jefferson with the No. 21 pick, instead selecting Jalen Reagor. While Jefferson was immediately one of the sport's elite receivers, Reagor looked more like a complimentary piece, hauling in 31 passes for 396 yards in his 11-game rookie campaign.

In our redraft, Jefferson is long off the board by pick No. 21, and Reagor fell out of the first round. Still, both the Eagles and Vikings are able to get exciting young receiving prospects.

At No. 21, the Eagles land Alabama product Jerry Jeudy. While Drew Lock had a very uneven season for the Broncos, Jeudy had 52 catches for 856 yards. In Denver, he's competing with Tim Patrick, Noah Fant, KJ Hamler, Daesean Hamilton and, once he returns from a torn ACL, Courtland Sutton for passes. In Philadelphia, Jeudy would immediately become the No. 1 option in the passing game.

With the 22nd pick, the Vikings select Clemson's Tee Higgins. A second-round pick in real life, Higgins had a pretty impressive rookie season with the Cincinnati Bengals, catching 67 passes for 908 yards. For as solid as that production is for a rookie, you do wonder if the Vikings traded Stefon Diggs away and didn't have a replacement like Jefferson, if the deal would have been more second guessed than it has been. 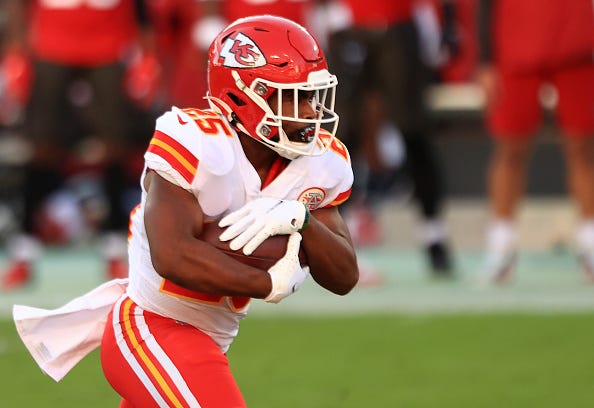 At 32, Chiefs Stick With Clyde

When you have Patrick Mahomes, Tyreek Hill and Travis Kelce, it becomes pretty easy to manage the workload of your rookie running back. Add in a midseason addition of Le'Veon Bell, and it's no surprise that Clyde Edwards-Helaire didn't have the same type of usage as someone like James Robinson in Jacksonville.

Still, Edwards-Helaire was extremely effective when he got touches. The LSU product averaged 4.4 yards per carry in 2020, and we get the sense that Andy Reid and Eric Bieniemy only began to scratch the surface of what he could be as a weapon in the passing game. There's quite a bit to like about the aforementioned Robinson, along with Jonathan Taylor, Antonio Gibson, Cam Akers and others in the 2020 draft class. Still, we're going to stick with Edwards-Helaire at No. 32.