On his 24th birthday Sunday, during the fourth quarter against Jacksonville, it appeared that Steelers wide receiver JuJu Smith-Schuster injured his foot after stepping on a referee penalty flag, but new video sent to us shows it may be more than just an injured toe.

The video, taken at a different angle, shows Smith-Schuster may have rolled his ankle after walking on the flag.

Evan Washburn noted on the CBS telecast that Smith-Schuster did indeed tweak his right ankle/foot area. With a 17-3 lead, the former Pro Bowler didn't appear on the next drive, which ultimately ended with Eric Ebron hauling in a 20-yard touchdown pass from Ben Roethlisberger. On the final drive of the game, the Steelers pulled all starters.

After the game, Steelers' head coach Mike Tomlin said he didn’t’ think Smith-Schuster’s injury was significant but with a short week, it could still be a factor.\\

“Yeah, I don’t think it’s anything major because that is why I just associated (it) with the bumps and bruises associated with play. Again, it could be a factor for him. It could be factors for others knowing we are dealing on a short week. I will update you guys as soon as I can when we get back to the top of the week.”

Smith-Schuster had four catches for 19 yards against the Jaguars.

The Steelers now turn their focus once again to Baltimore, who they will play on Thanksgiving night. 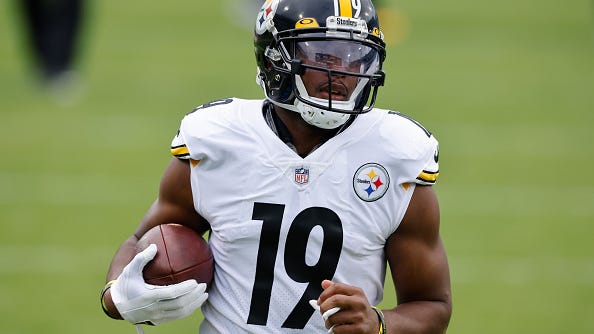 On his birthday, JuJu Smith-Schuster trips over flag