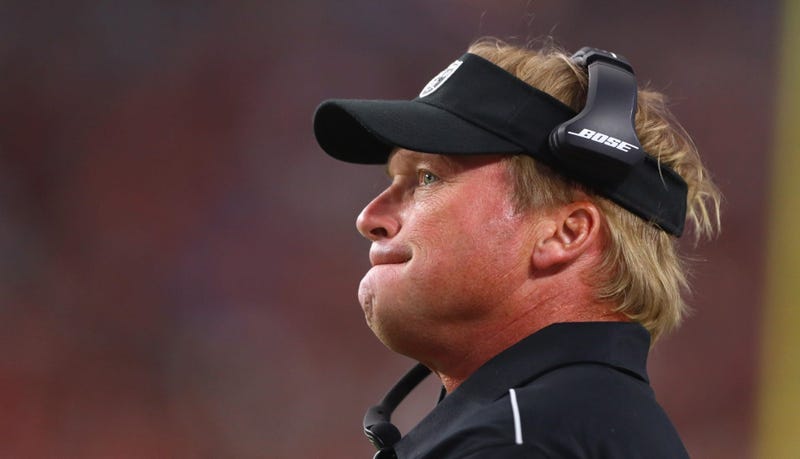 August 28, 2019 08/28/2019 7:26 pm
(670 The Score) There's a jagged and barren cluster of rocks known as the Farallon Islands that sits 30 miles west of Alameda, California, where the Oakland Raiders have been practicing. The "Devil's Teeth" -- as mariners have dubbed them -- are known to be an annual migratory summer stop for great white sharks, up to 100 at a time.

And this year's version of HBO's "Hard Knocks" seems set on jumping every last one of them.

I may finally have to quit on this, something I've not done since the show began airing in 2001. There's one episode left of the "Jon Gruden Really Likes Football and Really Likes Jon Gruden Show," and it might have to go on without me. Of course, I'm probably lying about that already, now tied to the masochism of finishing this off, because I'm an idiot. If it were equally bad food, I'd have stopped eating it after the first gastrointestinal crisis.

I'm supposed to care, is all, at least a little at this point or be in some way compelled to want to know what comes next for one of the storylines. Hard Knocks is what makes the worthless pantomime of the NFL exhibition season even remotely interesting outside of injuries and transactions. But what we're getting from this Raiders-sanitized version is a lifeless and tedious porridge that's only packaged like its more interesting predecessors.

Liev Schreiber is still intoning portentously, the production remains gorgeous and the heroic and militaristic theme music still sounds like a distillation of gridiron vainglory.

This may be just a Bears-fan thing, but get him off of my television. He was on it enough and the screen is still recovering, as are my retinas and optic nerves. He gives some of us flashbacks to the dark times, and there's nothing important about his competition with Nathan Peterman for a backup quarterback role.

Antonio Brown is famous and boring -- or at least they have succeeded in making him so. His feet hurt, he's in a hot-air balloon, he doesn't like his helmet, he's not practicing. This is TV drama.

Gruden at the lectern, Gruden in his office, Gruden's kid practicing to be an MMA fighter (?!), Gruden running around in shorts, Frank Caliendo impersonating Gruden, Gruden Grudening to the cameras and microphones in an effort to reach peak Grudenity before exploding into a plasma cloud of football lust.

We got a glimpse of guard Richie Incognito, then nothing. He's completely cretinous and pathological, and linebacker Vontaze Burfict also brings some real menace. Dealing honestly with either or both would be something to follow, instead of the fact that one of the Raiders' down-roster players hails from the exotic and strange foreign land of ... Canada. Or somebody rides a horse.

Nothing happens on this show. It's like they wanted to capture all that is drab and meaningless about preseason football and amplify it over five drawn-out hours.

I don't want to spend any more time with these people, but I'm almost certain I will.

Dan Bernstein is a co-host of 670 The Score’s Bernstein & McKnight Show in midday. You can follow him on Twitter @Dan_Bernstein.