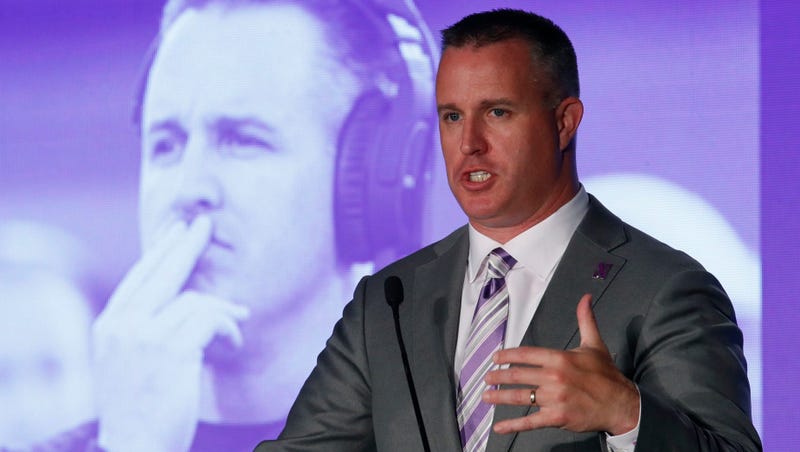 Here's what I learned while attending each day.

Numerous coaches and outgoing commissioner Jim Delany weren't shy about expressing their feelings regarding several issues that they have with the NCAA. They remain upset that the Big Ten has been shut out of the College Football Playoff for two straight years.

Delany's desire is that the CFP committee "pays more attention to the founders' effort to value strength of schedule as well as winning conference championships."

"I just think all these things need to be discussed after the last two years and what’s happened, because I think obviously a lot of people in this room as well as the people in our conference feel like we have an opportunity to compete with anyone, anywhere at any time," Franklin said.

Northwestern coach Pat Fitzgerald echoed that sentiment, wanting all Power 5 teams to play the same number of conference games and put "the value back on being a conference champion."

"To have a true champion, we have to have the same data points," Fitzgerald said. "And until we do that, it’s not any different than informs in the BCS. It's just a different name."

Big Ten coaches also took issue with the NCAA's newly adopted transfer portal and who is and isn't granted a waiver for immediate eligibility. It didn’t take long for a coach to speak up on the topic, as Illinois' Lovie Smith was the first to the podium and did so.

"Maybe more transparency as much as anything on how the process kind of goes a little bit when you deny it or grant it," Smith said.

"It’s been a little confusing to figure out who can get a waiver and who can’t, what are the actual criteria," Ferentz said. "I’d like to see that get cleaned up a bit."

A handful of coaches were mum about their quarterback situations.

Illinois, Northwestern, Ohio State Wisconsin, Penn State, and Rutgers will enter camp without their starting quarterback settled. It seems like there will be a competition to unseat the incumbent starters at Michigan and Indiana, where the underclassmen are pushing the current starters for playing time. Many teams could wait until their season opener to name their starter.

In a surprise, Big Ten commissioner-to-be Kevin Warren wasn't in attendance. It seemed as if the conference wanted to give Delaney the spotlight during his last Big Ten media day, which was appropriate. Delaney was praised by every coach during their opening statements.

A more detailed succession plan was laid out for Warren as well. Delaney will officially serve as commissioner until Jan. 1, but starting on Sept. 16, he and Warren will collaborate on their work through the end of the year.

"When he comes in, what we’re trying to do is use that time in a way that gives him a sense of the rhythm of the conference," Delany said. "So we’ll have conference commissioners’ meetings at the Big Ten, we’ll have joint group meetings."

Warren will have big shoes to fill, but Delaney was positive that Warren is "going to be a great fit" and added he's "really proud of the decision that the presidents made here."

Ferentz noted that the speed of recruiting has changed recently with the new early signing period along with official visits being allowed in June instead of during the season.

"Just the speed of recruiting right now to me is really concerning," Ferentz said. "In a logical world, you would wait for everybody to finish their careers, evaluate them and then go about the recruiting process. Kind of like the NFL does it."

"This summer has been interesting," Day said. "June has changed a lot. We now have official visits, so June is a bear for college football coaches. And having official visit weekends in June, it was a lot of work."

Nebraska coach Scott Frost on recruiting the state of Michigan: "We’re going to go where the players are. I don’t care where they are, if they’re in Jamaica or Kazakhstan, we’re going."