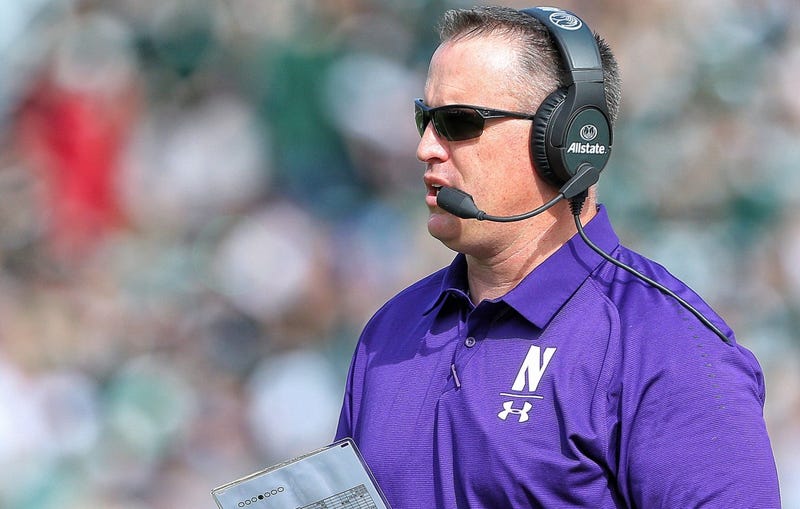 The Wildcats won the Big Ten West with an 8-1 mark in 2018 before falling to the Ohio State Buckeyes in the conference championship game. Northwestern then responded to win the Holiday Bowl against Utah to finish 9-5.

Northwestern opens at Stanford this Saturday. Ahead of that, let's break down what you need to know entering the new season.

Gone is Clayton Thorson, who was the winningest quarterback in school history. He started the most consecutive games (53) in Big Ten history and set school records for passing yards, completions and touchdowns, among others.

In comes the highest-ranked recruit ever to step foot on campus in Clemson transfer Hunter Johnson, a sophomore who continues to battle with senior T.J. Green for the starting quarterback job. When the depth chart was released, both Johnson and Green were listed on the first team. It's worth noting that Green was the first-team holder, which is typically the job of the backup quarterback.

"We have multiple guys we can win with and win championships with," Fitzgerald said when asked about his potential starter.

If I had to guess who trots out for the first snap against Stanford, it would be Johnson

The Wildcats stumbled out of the gate with a 1-3 start before rebounding to win the Big Ten West in 2018. Two of those three early losses were in non-conference action.

"There was a little bit of a lapse there early in the season," Fitzgerald recently said.

The Wildcats can ill afford a similar lapse, because the schedule is brutal early. Six of Northwestern's first seven games are against opponents who have opened the season in the AP Top 25 -- at Stanford, vs. Michigan State, at Wisconsin, at Nebraska, vs. Ohio State and vs. Iowa. UNLV is the only unranked foe that Northwestern will face early on, with that game coming in Week 2.

If the Wildcat’s can’t get off the block early, it could be a long season in Evanston.

Can Fitzgerald continue his ascension to the conference’s elite coaches?

Fitzgerald won the Big Ten Coach of the Year award last year, his first such honor and the first for a Northwestern coach since the late Randy Walker won it in 2000. With the retirement of Ohio State coach Urban Meyer, the question of who's the best coach in the Big Ten gets a bit murky. Fitzgerald could be seen as one of the best if the Wildcats have another productive season. Last year marked the first time Fitzgerald led Northwestern to an over-.500 regular season after the program had a 10-win campaign the previous year, so that was a step toward more sustained success. The Wildcats have finished three of the past four years ranked in the top 25. Another year of such success, and Fitzgerald's name will be included among the Big Ten's best coaches.

Is the Wildcats' depth good enough to compete for a Big Ten title?

As the Wildcats made their surprising run to the Big Ten championship game in 2018, it was the big contributions from their depth that was a key. After Northwestern lost starting running back Jeremy Larkin to a career-ending injury in its bye week in September, freshman Isaiah Bowser stepped up to lead the team in rushing. Such an injury would've been a bigger setback for the program in seasons past.

Fitzgerald believes the Wildcats' depth will be a big factor again.

"The depth that we probably have collectively as a team is the best we’ve had starting a season," he said.

The first seven weeks won't be easy. If Northwestern can get through them at 4-3, it will be set up for good success, as the schedule is much more favorable later. I have the Wildcats going 8-4 in the regular season. They won't head back to Indianapolis to defend their Big Ten West crown, but it will be another successful season that ends by going bowling. That would mark Northwestern's fifth straight season reaching a bowl, match its run from 2008-'12.