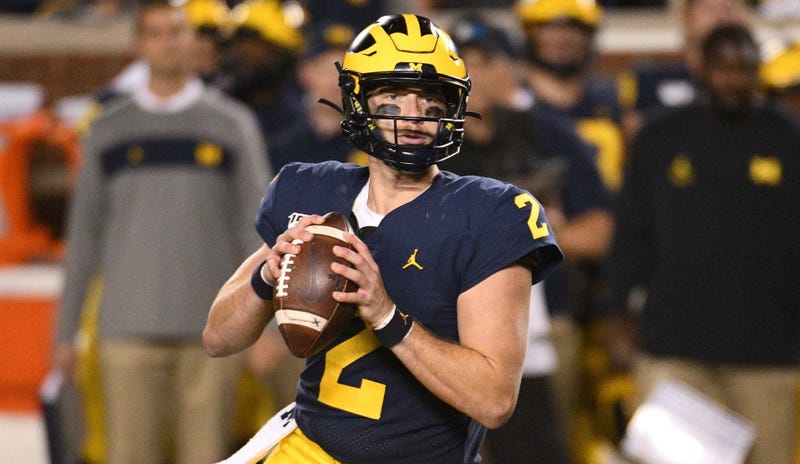 This weekend brings us one conference game, as Ohio State travels to Indiana. Let's break down the top Big Ten storylines of Week 3 before conference play really gets going in Week 4.

The past two College Football Playoffs haven't included a Big Ten representative, and the conference hasn’t scored in a playoff game since Ohio State won the national title in January 2015.

Ohio State and Michigan both started in the top 10 of the preseason polls. The Buckeyes currently sit at No. 6 and the Wolverines at No. 10. Penn State sits at No. 13 and Wisconsin at No. 14. While it's not exactly what the conference was looking for early on, the Big Ten's best do remain undefeated. With Clemson and Alabama near-locks to finish in the top four, the Big Ten will need a team step up or it will be left out of the CFP again.

Which quarterbacks will be healthy?

The most important position on the field is getting thin for some teams due to injuries.

In order for the conference to gain the national respect needed to get into the CFP, the quarterbacks need to be healthy and productive.

Mike Locksley has led his Maryland Terrapins to a strong start, as they demolished Howard, 79-0, in their season opener before dispatching No. 21 Syracuse, 63-20 in Week 2. The performances impressed the pollsters, as Maryland climbed to No. 21 in the AP Top 25. It's the first time since 2013 that the Terrapins have been ranked. Maryland visits Temple this weekend before facing No. 13 Penn State, so we will know soon if Locksley has the program on the fast track toward a rebuild.

Wisconsin is a juggernaut, so far

Wisconsin junior quarterback Jack Coan has looked great in stepping in for Alex Hornibrook, who transferred to Florida State. The Badgers are averaging 55.0 points per game, and it's not just running back and Heisman Trophy candidate Jonathan Taylor doing all the work. Coan has completed 76.3 percent of his passes and is averaging 281.0 passing yards per game while throwing five touchdowns and no interceptions.

The Wisconsin defense has been as stout as it gets in recording back-to-back shutouts, and the Badgers are the only school in the country that hasn't allowed a point yet. After a week off, Wisconsin will host Michigan on Sept. 21.

Some believed Illinois coach Lovie Smith was on the hot seat entering this season, but he's led the Illini to a promising 2-0 start. Illinois now will host Eastern Michigan in a winnable game Saturday.

Multiple transfers have their fingerprints over Illinois' start, including quarterback Brandon Peters. A transfer from Michigan, Peters has given Illinois a passing threat to go along with a solid rushing attack. A trio of USC transfers in receiver Josh Imatorbhebhe, receiver Trevon Sidney and defensive lineman Oluwole Betiku Jr. are contributing as well. Betiku is having the biggest impact, as he leads the nation with five sacks.

It’s safe to say the transfer portal has been kind to the Fighting Illini. If Smith can lead them to a bowl game, his seat will be plenty cool.

After a 17-7 loss to Stanford to open the season, Northwestern faces a telling stretch. Four of its next five opponents after this weekend are currently ranked in the top 25. The Wildcats need to get on the board with a win this weekend, then prepare for the tough slate. Johnson will need to improve quickly, as he was the starter in the opener before struggling early, which led coach Pat Fitzgerald to give Green his chance.

Now the team is Johnson's to lead. The talent is there for him, as he's a former five-star recruit.