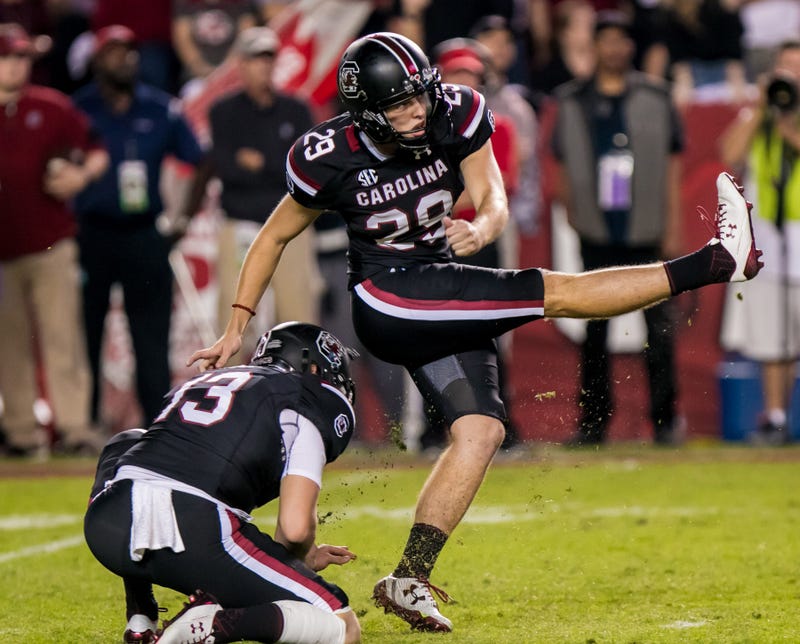 April 12, 2019 04/12/2019 7:41 pm
(670 The Score) The Bears signed kicker Elliott Fry to a three-year contract, they announced Friday evening, adding yet another leg to their kicking competition. He landed with the team after a tryout at Halas Hall earlier in the day.

Fry, 24, most recently kicked with the Orlando franchise in the now-defunct American Alliance of Football league. He was 14-of-14 on field-goal attempts there. A South Carolina product, Fry connected on 66 of his 88 field-goal attempts over three seasons in college.

With the AAF folding early last week, the Bears took advantage and added a new free agent -- perhaps also filling a need ahead of the NFL Draft.

"Very consistent, solid kicker," said Chris Sailer, a kicking coach to Fry and many other NFL kickers. "Gets elevation on his balls. That's one thing that kind of separates him.

"He's really strong with the mental game. A lot of guys got thin skin. Elliott, nothing really gets to him. If he misses a kick or if something goes wrong, he will rebound quickly."

Fry is the third kicker signed by the Bears this offseason, joining Redford Jones and Chris Blewitt. Of that group, he's the only one who was given a multi-year contract.

The Bears released one-time Pro Bowl kicker Cody Parkey in March after he had turbulent 2018 in which he went 23-of-30 on field-goal attempts and missed several key kicks -- none more costly than the 43-yard field-goal attempt that he knocked off the left upright and crossbar in the waning seconds of a 16-15 loss to the Eagles in the wild-card game.

Bears general manager Ryan Pace has vowed his team would "explore every avenue" in searching for a new kicker -- a position that has haunted Chicago since releasing veteran Robbie Gould in September 2016.

Among the kickers whom Sailer has coached is Parkey, who remains an unrestricted free agent. What have the Bears been missing in their search for a kicker?

"Honestly, it's good fortune," Sailer said. "When you look at it kind of from the grand scheme of things, Cody Parkey's had a great career. He had two poor games that are identifying him as being a bust for them, but he had great games too.

"They've been unfortunate. But I don't think it's for a lack of scouting. They've brought great players in, and they haven't gotten it."