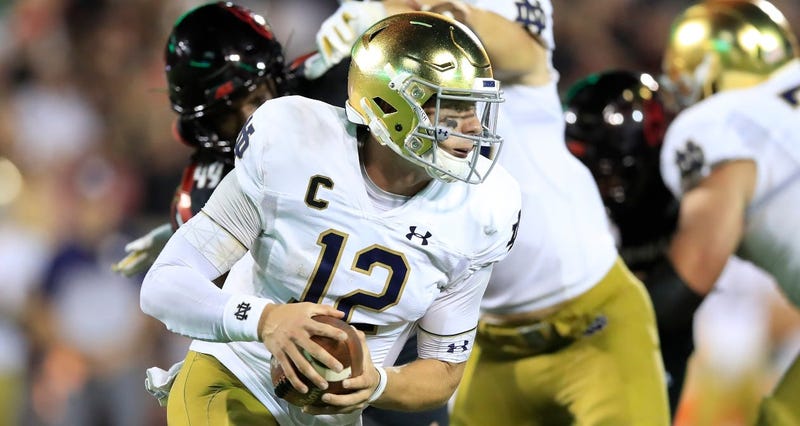 September 19, 2019 09/19/2019 10:05 pm
(670 The Score) It used to be when you played Notre Dame, you were playing against the ghosts of Knute Rockne, Frank Leahy and endless all-time greats. The ghosts these days that are brought up aren't the friendly kind but rather the ones that remind you of letdowns on the biggest of stages in recent years.
A collection of what we've heard recently about No. 7 Notre Dame (2-0) as it prepares to play at No. 3 Georgia (3-0) on Saturday:

Those are just a few examples out there doubting Notre Dame on the big stage. The Irish enter as 15-point underdog, according to Bovada, and close to that on other sites. That seems a bit steep to me, but regardless, it reflects this point: It will be an uphill battle for Notre Dame to quiet its naysayers.

A marquee road win has escaped Notre Dame in recent years despite a handful of close calls, including against Florida State (2014) and Stanford (2015). And despite Notre Dame going unbeaten during the 2018 regular season, the narrative around its road woes wasn't quieted. That's because its biggest road wins were against Virginia Tech, Northwestern and a disappointing USC team.

After Notre Dame's 30-3 loss to eventual national champion Clemson in the Cotton Bowl in the national semifinals last season, here we sit again with a nation giving the Irish little chance in Athens on Saturday.

Contrary to the final score, I didn’t think the top-flight talent discrepancy was that big between Clemson and Notre Dame. The Tigers' advantage was in their depth, which the Irish couldn't match.

Perhaps that dynamic has changed. The Irish’s recruiting has been on the uptick in recent years, and depth has become more of a strength. It's not yet on par with that of Clemson or Alabama or Georgia, but the idea that Notre Dame doesn't belong on the same field as those teams or the SEC is laughable.

Which brings us back to the Notre Dame-Georgia showdown. This isn't some kind of David vs. Goliath matchup, as I discussed in breaking down the game on my Radio.com Sports podcast previewing the game. Also check out the podcast for my official prediction.

It will take a great effort and good fortune for Notre Dame to win at Georgia, but remember, the Irish team took the Bulldogs to the final possession when the two met in South Bend in 2017. Georgia snuck out with a 20-19 win that night, and that Bulldogs team turned out to be all right. It won the SEC and lost in overtime to Alabama in the national championship.

Notre Dame is understandably the underdog entering Saturday, but the idea that the Irish don't belong on the same field is a laughable one.

Nick Shepkowski is the executive producer of the McNeil & Parkins Show on 670 the Score in afternoon drive. Follow him on Twitter @Shep670.​ He also hosts the Notre Dame Pregame Show on Radio.com Sports, which you can listen to here.