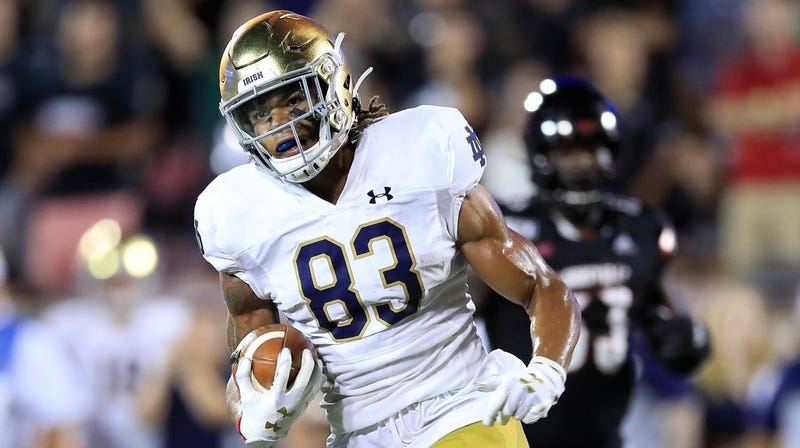 September 26, 2019 09/26/2019 10:22 pm
(670 The Score) No. 10 Notre Dame's matchup against No. 18 Virginia in South Bend this Saturday has scared the hell out of me since the schedule was released. It's because it has all the makings of a trap game.Notre Dame is coming off its biggest game of the season, a 23-17 loss at No. 3 Georgia. That’s always an emotional mountain to come down from, win or lose, after the crazy atmosphere that was on display in Athens. Beyond that, this Virginia football team is a solid one. The Cavaliers are 4-0. Two of those victories were against William & Mary and Old Dominion, but Virginia also has two ACC wins in beating Florida State and Pittsburgh.

What the Irish need to be most worried about may be keeping quarterback Ian Book off his rear end. Notre Dame did a great job of that against Georgia in not allowing a sack, but Virginia has an NCAA-leading 20 sacks in 2019. Outside linebacker Jordan Mack leads the way with five. It's worth noting 13 of Virginia's 20 sacks have come against William & Mary and Old Dominion, but it has a solid pass rush built on a 3-4 scheme.

Virginia quarterback Bryce Perkins will also be a thorn in Notre Dame's side, as he is for everyone. He's probably the second-best quarterback in the ACC. Perkins was the only player other than Heisman Trophy winner Kyler Murray who threw for at least 2,400 yards and rushed for at least 800 yards in 2018. Perkins has a habit of turning the ball over, throwing four interceptions this season, but he's a great bet to break off at least one long run. He has a rush of 15 or more yards in 15 of his 17 careers starts for the Cavaliers.With that in mind, the Irish will have to be mentally prepared and make plays. Do that and Notre Dame should avoid trap game trouble, which has occurred too often in the Brian Kelly era.

A 6-0 start for Notre Dame in 2014 was halted in a last-minute loss at Florida State, and the Irish then were sitting at 7-5 just more than a month later.

And who can forget 2016? A loss at Texas in the season opener led to a brutal 4-8 season for Notre Dame.

So the question now is this: Will the Irish bounce back and be knocking on the door of the College Football Playoff a month from now or fold like a cheap suit and transform from a top-10 team into one that fails to challenge for a major bowl game?We should have a pretty damn good idea come Saturday evening.

Nick Shepkowski is the executive producer of the McNeil & Parkins Show on 670 the Score in afternoon drive. Follow him on Twitter @Shep670.​ He also hosts the Notre Dame Pregame Show on Radio.com Sports, which you can listen to here.