(RADIO.COM Sports) There are eight players in the NFL with a combined 250 catches, 3,000 receiving yards and 15 touchdowns over the past three seasons. And while pass catchers who are paired with proven quarterbacks such as the Packers' Davante Adams (Aaron Rodgers), the Saints' Michael Thomas (Drew Brees), the Chiefs' Travis Kelce (Patrick Mahomes) and the Falcons' Julio Jones (Matt Ryan) are seen in this exclusive group, the Bears' Allen Robinson has achieved those numbers with little consistency from his quarterbacks.

Take the 2019 season as an example, as Bears quarterback Mitchell Trubisky finished No. 21 in passing yards and No. 28 in passing touchdowns while posting a passer rating that had him sandwiched between Sam Darnold and Mason Rudolph. This 2020 season saw the Bears' quarterback situation remain murky, with Trubisky and Nick Foles splitting the starting job without the offense finding much success. Despite the eighth-most pass attempts in the NFL, the Bears were a bottom-10 passing offense in terms of yards gained.

But that didn't stop Robinson from posting more than 1,100 receiving in each campaign, with a massive target share acting as a testament to his ability to get open, outsmart defenders and earn the trust of his teammates in one-on-one situations. Poor quarterback play is nothing new to Robinson either. He posted a brilliant stat line in 2015, going for 1,400 receiving yards and a league-high 14 touchdowns while Blake Bortles was at the helm.

In Robinson, prospective teams would get a wideout who can make plays regardless of who's under center, and it's reasonable to think that his best years could be ahead of him considering he has yet to play for an elite quarterback. He's 27 years old and has given the Bears a chance to extend him for the future. Needless to say, that hasn't occurred, and though he has explained that he's grateful for the team and his experiences, "there are more things that weigh out than just fondness" in determining his future. 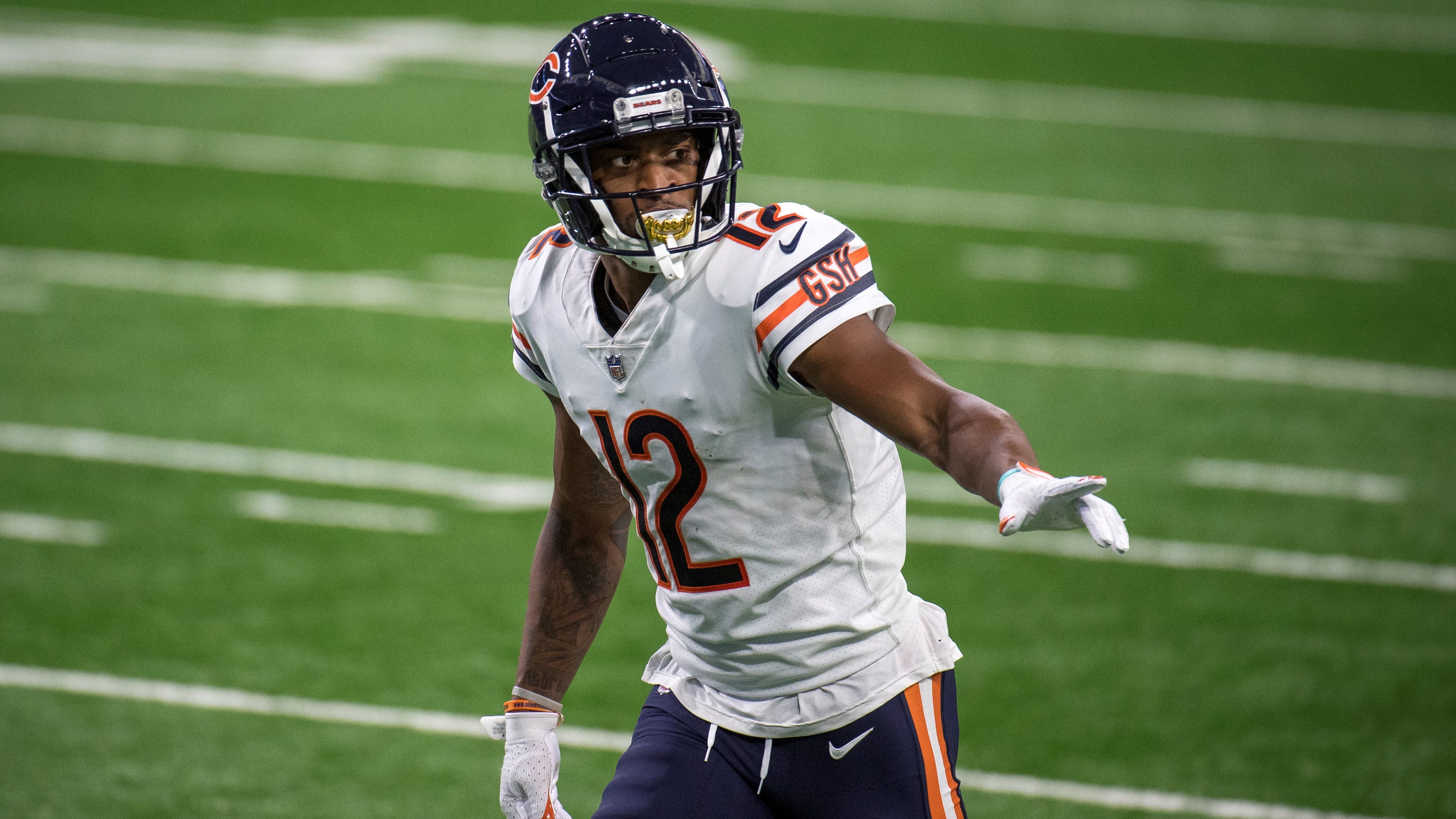 With Bears contract expiring, Allen Robinson ready to face free agency: 'Everything is on the table'

Perhaps more postseason success, a more stable quarterback situation and a team that's willing to pay him what he deserves — Spotrac calculates his market value to be around $19.8 million per year in a deal going forward — are those said factors that will influence where he ends up.

Let's break down some potential landing spots for Robinson -- and yes, the Bears are still in the mix. 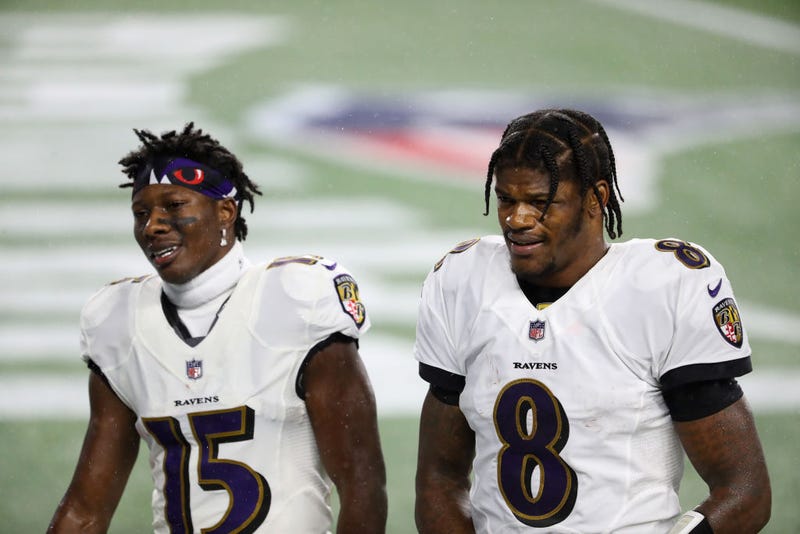 The Ravens' ground game didn't go anywhere from 2019 to 2020, adding an extra element as rookie J.K. Dobbins had a breakout. But the passing game took a step back, as Lamar Jackson passed for nearly 400 fewer yards and 10 fewer touchdowns. While Hollywood Brown and Mark Andrews both broke on to the scene in 2019, neither affirmed his status as a top-tier receiving option in 2020. Brown was especially silent early on — he had 431 yards and two touchdowns through the first 10 games — though he started to pick it up in the back half of the season.

Baltimore has some decisions to make on players like Matt Judon and Yannick Ngakoue, and the rest of the postseason will help to determine their importance to the team. If the offense is the side that falters and ends the Ravens' postseason run, that's a different story. What we do know is that Jackson could use a receiver like Robinson if he wants to take a step up as a passer, and the front office could allocate cap space toward that goal. 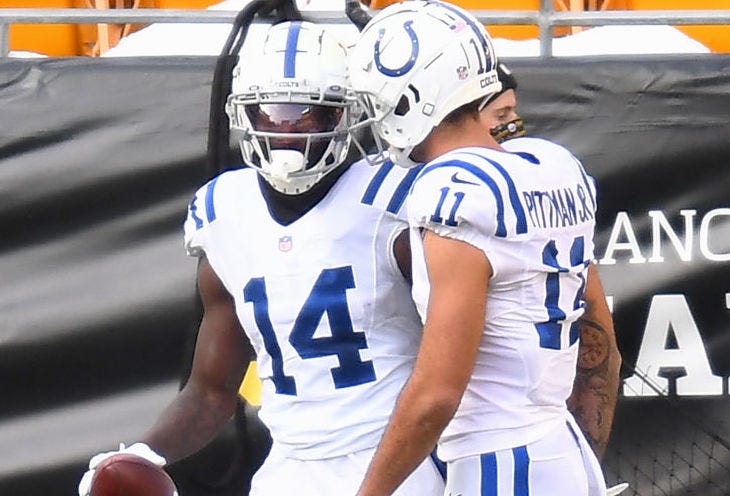 Zach Pascal and Michael Pittman may need a new receiver to join them next year. Photo credit Joe Sargent/Getty Images

The biggest decision that awaits the Colts has to do with the quarterback position, but finding that player some new weapons on the outside should also be a focal point. Longtime Indy fixture T.Y. Hilton is an impending free agent, and his days as a top wideout seem to be a thing of the past — he failed to break 60 catches or 800 yards in both of the last two seasons.

The Colts could bring Hilton back and go forward with the corps of Hilton, Michael Pittman Jr., Zach Pascal and the injury-prone Parris Campbell once again. But if they don't completely break the bank on someone like Carson Wentz and have room to add a big name — Spotrac lists them as having more than $53 million in cap space, the fourth-most in the NFL — wide receiver is a position that makes sense to address. And Robinson would serve as an upgrade over Hilton and as a mentor for the rest of the group. 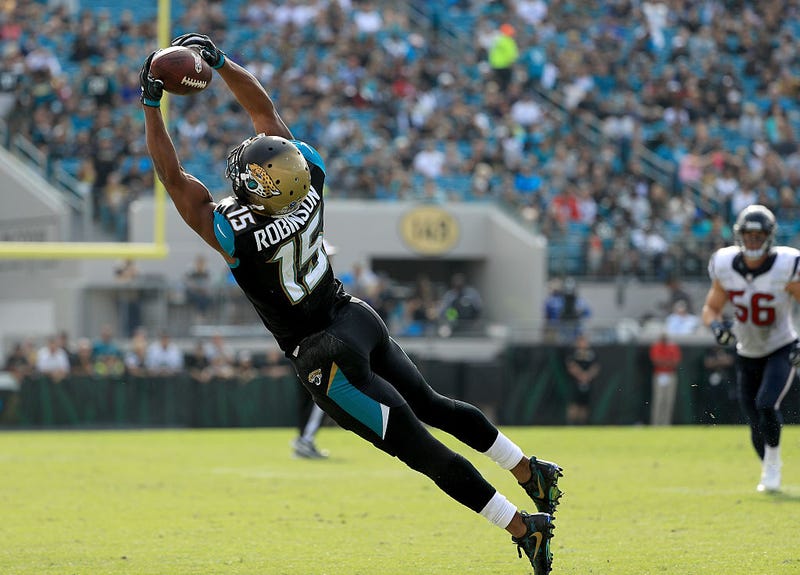 Allen Robinson extends for a great catch in his days with the Jaguars. Photo credit Mike Ehrmann/Getty Images

A reunion with Robinson would bring life back to the Jaguars, though their seemingly inevitable selection of Trevor Lawrence in the 2021 NFL Draft should do that on its own. Still, Robinson would add a top threat that the Jaguars' pass-catching group currently lacks, and coming back to the city where he recorded his best season to play for Lawrence should be exciting for him too.

What might hold Jacksonville back from pulling the trigger on such a deal is the fact that they have pressing needs to address all over the field, and wide receiver shouldn't be paramount among their concerns. DJ Chark, Laviska Shenault and Keelan Cole — an impending free agent himself — might be a good enough group with a dependable quarterback at the helm, especially considering Chark exploded in 2019 for a Pro Bowl campaign. The intrigue has to be there though, and Robinson has fueled it himself. 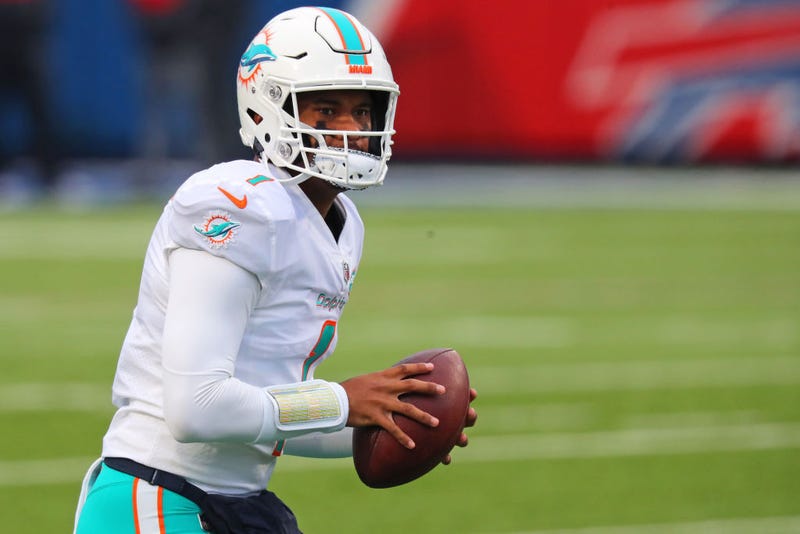 Tua Tagovailoa didn't have the most memorable debut season, but he certainly didn't have the most memorable supporting cast in the wide receiver department to help him achieve success. After finally breaking out in 2019, DeVante Parker just couldn't quite find his groove with Tagovailoa, and there's little depth behind him in terms of strictly wide receivers — Mike Gesicki was great but is a tight end. Preston Williams got hurt early, and none of Jakeem Grant, Isaiah Ford or Mack Hollins was particularly reliable.

Miami is currently projected to have more than $25 million in cap space and without too many in-house free agents to worry about, a good deal of that money could go toward Robinson. However, with the No. 3 pick in the draft, many analysts see the Dolphins picking up Tagovailoa's former Alabama teammate and Heisman Trophy winner DeVonta Smith and filling that need for a long time to come. 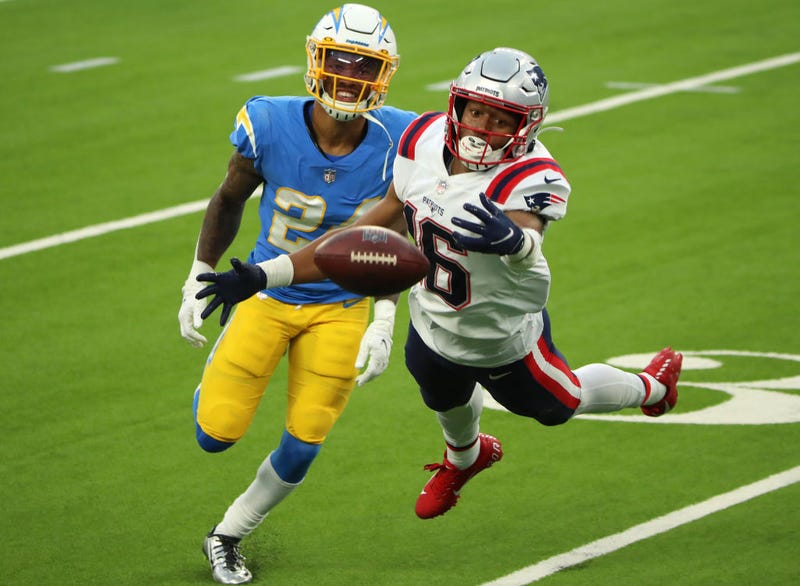 Could this be the offseason in which the Patriots finally look for a high-profile wide receiver? There hasn't been one entrenched in New England for quite some time outside of Julian Edelman — Brandin Cooks stopped by for the 2017 season, if you count that, and Antonio Brown's and Josh Gordon's stints didn't pan out — and they've tried and failed through drafts to fill that hole.

New England will have cap space — Spotrac projects the Patriots to have the third-most with more than $58 million — and though some of that will have to go to the many in-house expiring players, there should be plenty left to use on a big name like Robinson. Of course, a new quarterback could cost the Patriots handily if they take a gamble on an intriguing name, and there's a chance they look to get one of this year's prized rookie wide receivers through the draft instead of through free agency. 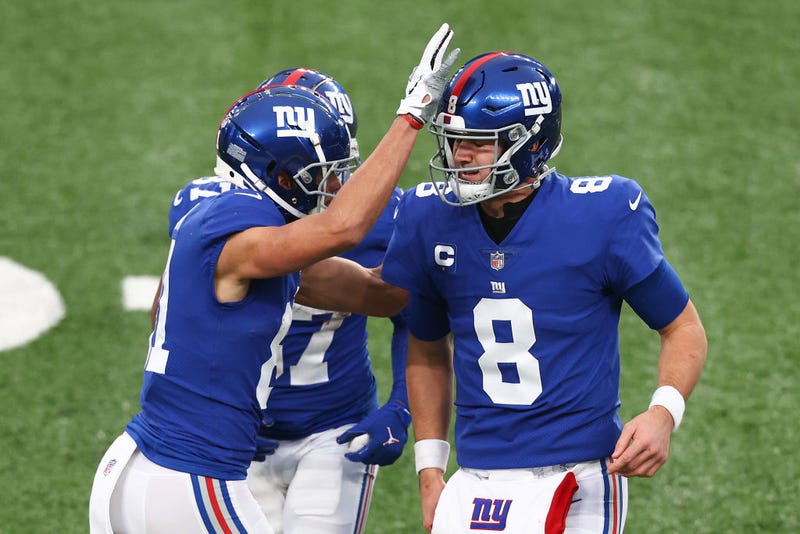 Both of the New York football teams

Quarterback issues plagued both New York football teams, but a definite No. 1 wide receiver was also lacking from the equation in both cases. The potential is there — we saw flashes from names like Denzel Mims and Darius Slayton for the Jets and Giants, respectively — but there aren't any top players at the position to be found in the Big Apple.

The Jets are in a better situation in terms of cap space, but they also need to shore up practically every area of the team in a massive rebuild attempt. The Giants, on the other hand, are currently projected to be over the cap as they enter free agency, but some maneuvering in the books through contract restructuring and cap casualty cuts could make this a feasible venture. 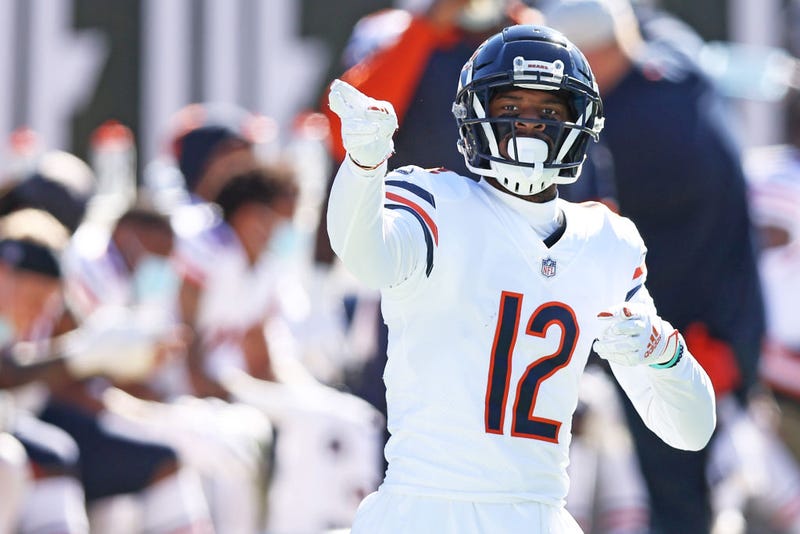 Like Robinson said, if the Bears haven't gotten an extension done with him over the past 365 days, it's probably not going to come in the next couple of months before free agency officially opens. That may make the franchise tag the most likely path to Chicago retaining Robinson. It was more than $17.8 million for receivers in 2020, but it could drop this season. Of course, it's not what Robinson wants. When asked about the possibility of a franchise tag, Robinson chose to "plead the fifth," showing that he's not going to receive that option too happily.

Then there's the transition tag, which would allow the Bears to see how other teams evaluate Robinson and either match those offers or let him go, which is a solution that could act as a nice compromise, as Chris Emma of 670 The Score noted.

The fact of the matter is that without Robinson, the Bears would need to pick up a wide receiver prior to the start of the 2021 season. Anthony Miller and Darnell Mooney probably wouldn't cut it, and regardless of who ends up at quarterback, it wouldn't be smart to send him out with this supporting cast. Robinson's price tag on the open market, however, seems to be too much for the Bears to commit to at this point.