(RADIO.COM Sports) This isn't hyperbole -- outfielder George Springer is one of the greatest hitters in postseason history.

Now, given what we've learned over the past year about the Houston Astros' sign-stealing scandal, it's certainly fair to put an asterisk next to some of his postseason production, including in 2017, when he tied Reggie Jackson and Chase Utley for the most home runs in a single World Series.

Still, whatever extra assistance the former World Series MVP may have had in the past, we can be fairly certain he didn't have it in 2020. And in his age-30 season, Springer had a productive campaign, slashing .265/.359/.540 with 14 home runs and 32 RBIs in the pandemic-shortened year. Though the Astros barely snuck into the playoffs with a losing record, Springer helped them to reach the American League Championship Series for the fourth consecutive season, homering four times and driving in 10 runs in the team's 13 postseason games.

Considering he's on the wrong side of 30, it may not be wise to bet on Springer continuing to be an above-average center fielder, but to this point, there has been minimal defensive decline from him. Springer posted five defensive runs saved as a center fielder in 2020, actually grading out much better than he did at his natural position of right field, where he had minus-3 defensive runs saved in a small sample size.

If Springer signs a five or six-year deal in free agency, chances are he won't still be effective in center field by the back-half of the deal. But if he's able to play in center for a couple years, that would seemingly increase the return on investment that any suitor could be making this winter. What we saw in 2020 suggests that Springer still can provide valuable defensive flexibility as well.

Since 2014, Springer has been the 14th-most valuable offensive player in MLB, according to FanGraphs, which makes him an option worth considering for these five contenders. Let's take a look at his most likely landing spots in free agency. 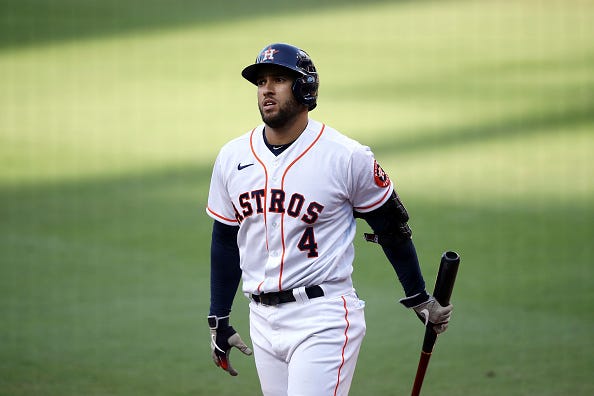 As you may have heard, the Red Sox traded Mookie Betts prior to the 2020 season, and Jackie Bradley Jr. can become a free agent this upcoming offseason.

Perhaps the Red Sox will re-sign Bradley, a former Gold Glove winner, but Springer would provide a massive offensive upgrade. It feels less-than-likely that the Red Sox would re-sign Bradley Jr. and sign Springer, but signing Springer this winter could be the first major addition for chief baseball officer Chaim Bloom.

The issue with the Red Sox potentially signing Springer is that while he could help give them a lineup ready to make a deep playoff run, the team still feels like it's a few starting pitchers away from being able to be a serious contender. That may make the Red Sox less inclined to spend big on Springer, which would seemingly be a win-now move. 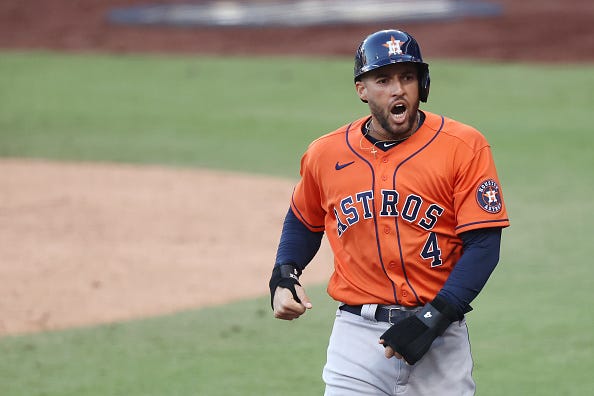 General manager James Click lauded Springer as "one of the best players to ever wear an Astros uniform" after the season, but he also acknowledged an uncertain future in the team's relationship with him, citing lost revenue in 2020 and uncertainty about the sport's financial future.

The Astros could attempt to re-sign Springer, but it's not clear if they'll be able to retain both he and shortstop Carlos Correa, who can become a free agent after the 2021 season. Springer has had the better career to this point, but Correa is five years younger.

Additionally, the Astros have uncertainty in their starting rotation. Justin Verlander will almost certainly miss all of 2021 after having Tommy John surgery in late September, and 37-year-old Zack Greinke is entering a contract year of his own.

It wouldn't be at all surprising if the Astros attempt to keep Springer in Houston for the entirety of his career, but you get the feeling that the team may begin to retool this offseason. Springer could be a casualty of that. 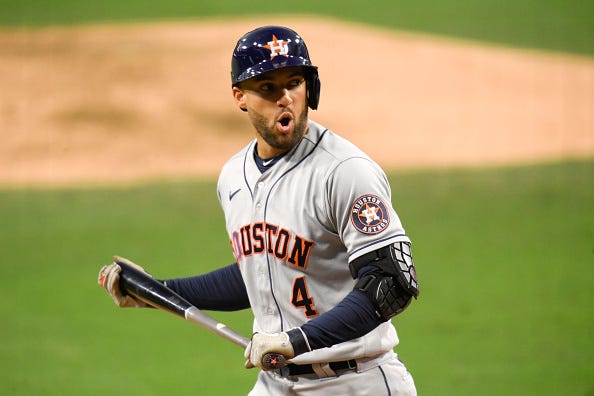 George Springer is one of the greatest hitters in postseason history. Photo credit Harry How/Getty Images

The Phillies have a roster built to win right now but haven't done much winning with it so far, going just 28-32 this past season. Both J.T. Realmuto and Didi Gregorius can become free agents this offseason, and neither are certain to return to Philadelphia.

Realmuto, widely considered the best catcher in the sport, is beloved by Phillies fans. That said, he's a catcher who will be 30 when the 2021 season begins, and Realmuto could look for a deal with a total value near $200 million, according to Todd Zolecki of MLB.com.

If Realmuto departs, the Phillies could pivot in a few other directions. RADIO.COM MLB insider Jon Heyman believes the team could be in play for National League Cy Young candidate Trevor Bauer. The Phillies don't have a permanent general manager in place, and managing partner John Middleton has suggested that the team is uncertain how much it will be able to spend this offseason, so don't be shocked if the Phillies kick the can for a year if they can't reach a deal with Realmuto. But Springer certainly has to be a consideration. 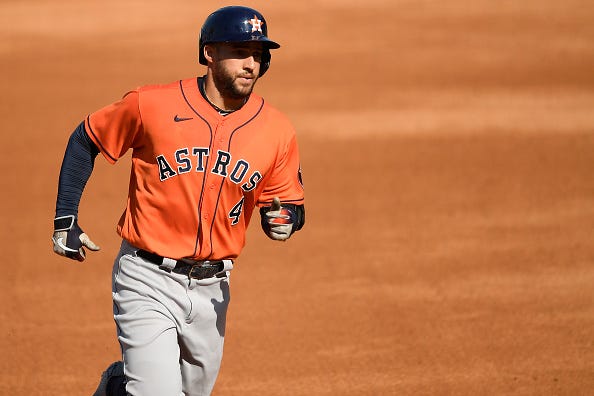 The White Sox may be best served investing resources in another starting pitcher -- such as Bauer -- but adding Springer would be the icing on the cake of what's already a really strong lineup.

Luis Robert is entrenched in center field, but right field is very much open. Adding Springer in right field would allow him to join a lineup that already includes the Robert, Jose Abreu, Eloy Jimenez, Tim Anderson, Yasmani Grandal and Yoan Moncada. That would create one of the deepest lineups in the sport.

After going 35-25 and reaching the postseason for the first time since 2008, the White Sox fired Rick Renteria and are still in the midst of a managerial search. A.J. Hinch, Springer's former manager in Houston, and Alex Cora, Springer's former bench coach in Houston, are two names who could be of interest for the position. Either one getting hired could potentially increase the likelihood that the White Sox pursue Springer. 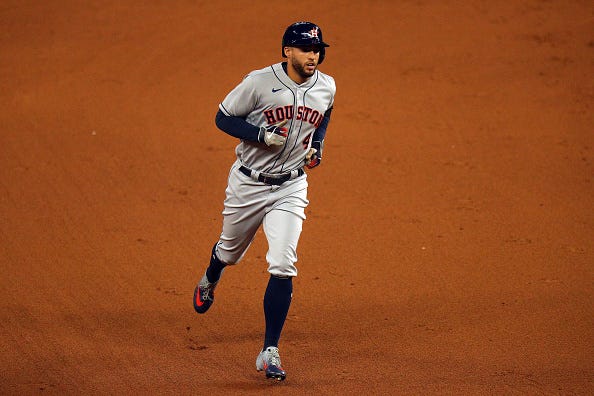 While the top concern of Cardinals fans entering the offseason may be attempting to retain franchise icons Yadier Molina and Adam Wainwright, adding Springer would drastically improve a team that made the playoffs in 2020 despite a hectic and challenging schedule because of COVID-19.

Springer could play center field for the Cardinals, where Harrison Bader has been an excellent defensive player for St. Louis with limited offensive output. Springer could also perhaps play right field, where Dexter Fowler is entering the final year of a five-year, $82.5-million deal that's he's largely underperformed while playing under. Maybe the most likely scenario would be for Springer to play a bit of center and a bit of right field, depending on whether having Bader or Fowler in the lineup on a given day gives the Cardinals their best chance to win.

With Springer in the fold, the Cardinals could become the favorites to win the National League Central, especially with a real chance of both the Cubs and Reds getting worse this offseason.