After three weeks of dusting off cobwebs, the feeling-out portion of the fantasy slate is officially behind us. We’re in the meat of the season now with patterns developing, depth charts and pecking orders beginning to crystallize and rookies finding their identities. The fog may be clearing but don’t get comfortable — the fantasy gods always have a few tricks up their sleeves.

While I have you here, here are seven worthy pickups whom I’m targeting on waivers this week. 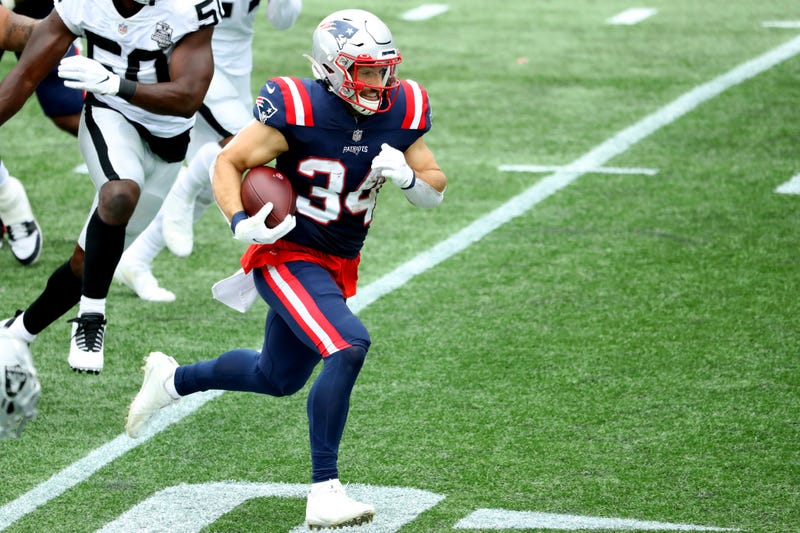 Burkhead balled all the way out Sunday, steamrolling the visiting Raiders for 98 yards (49 rushing, 49 receiving) and three touchdowns in the Patriots' 36-20 rout. Remarkably, Burkhead compiled those impressive totals while logging fewer carries (six) than teammates Sony Michel, Cam Newton and JJ Taylor. How’s that for efficiency? If you’ve ever had the privilege of owning a Patriots running back in fantasy, you know how volatile they can be and Burkhead -- who has seen double-digit carries on just seven occasions (playoffs included) over his four-year tenure in New England -- is no different. In fact, Burkhead’s current pass-catching role will probably evaporate once James White returns (he’s missed the past two games following his father’s death) to the Patriots’ backfield mix. But until that day comes, Burkhead’s chemistry with Newton can’t be dismissed. His 96 receiving yards rank fifth among NFL running backs.

After getting his beak wet with a modest 16 carries over his first two contests, Gaskin saw his workload expand dramatically in the Dolphins' triumph against the Jaguars on Thursday, turning a career-high 27 touches into 95 yards from scrimmage (66 rushing, 29 receiving). There are still hurdles for the seventh-round sophomore to clear in his ongoing quest for fantasy relevance. His upside is capped by Jordan Howard’s continued goal-line presence (he’s already vultured three touchdowns) and the run-heavy game script against the Jaguars as the Dolphins took a big lead early likely won’t be a frequent occurrence. That said, Gaskin’s receiving contributions (15-91-0 on 16 targets) make him a worthy stash in PPR formats.

Once a perennial threat for double-digit touchdowns, Graham’s star has faded considerably in recent years. A decade of wear and tear will have that effect, though the 33-year-old Graham has experienced a surprising resurgence lately, tying for the league lead among tight ends with three receiving scores. He made two of those end zone visits Sunday while also soaking up a season-high nine targets in Chicago’s come-from-behind win at Atlanta. Four of his six catches against the Falcons came after underachiever Mitchell Trubisky passed the quarterback baton to Nick Foles, who will be the Bears’ starter going forward. Foles’ promotion to QB1 is good news for all Chicago skill players, especially Graham, who already has as many touchdowns this year as he did all of last season in Green Bay. Along with increased scoring opportunities, the 6-foot-7 Graham could also see more involvement in the short passing game with receiving back Tarik Cohen now lost to a season-ending ACL tear. 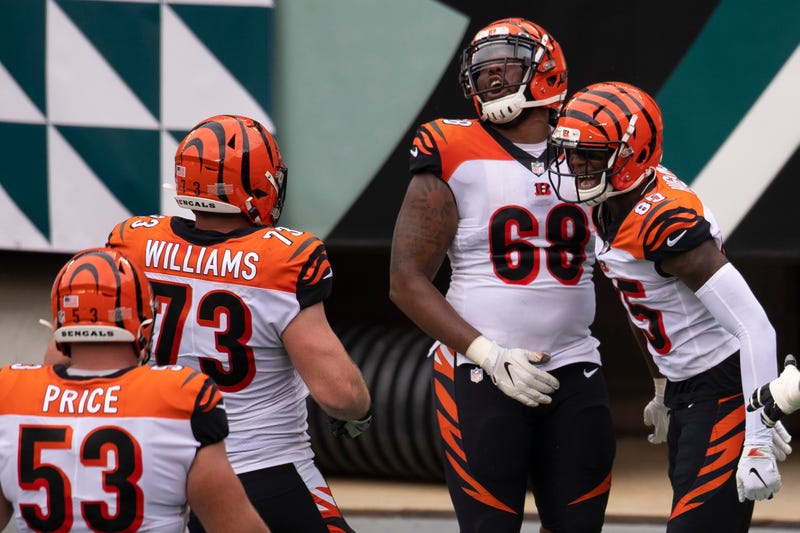 Last week turned out to be quite the showcase for rookie receivers with Higgins, Brandon Aiyuk and Justin Jefferson (who we’ll discuss later) each displaying what made them such coveted selections in the draft back in April. Arguably a first-round talent, Higgins fell to the first pick of the second round after testing poorly at his pro day. But what the 21-year-old Higgins lacks in downfield burst, he more than makes up for with size (6-foot-4, 215 pounds) and his ability to win in traffic. With A.J. Green showing noticeable rust after losing all of last year to ankle surgery, Higgins has already emerged as a favorite of rookie quarterback Joe Burrow, corralling five of his nine targets for 40 yards and two touchdowns in a tie with Philadelphia on Sunday. With Higgins now working ahead of both Auden Tate and John Ross (the latter a healthy scratch in Week 3), volume shouldn’t be a problem. Cincinnati’s anemic defense has forced the Bengals into shootouts regularly (only the Giants have passed on a higher percentage of plays), which should also work to Higgins’ advantage.

The Seahawks have been letting Russell Wilson cook lately, but don’t forget who coaches them. Pete Carroll loves to #EstablishIt (only the Ravens and 49ers registered more carries in 2019) with bell-cow Chris Carson, who was lost to a knee injury late in in a victory against the Cowboys on Sunday. It looks like Carson escaped with just a sprain, but with Seattle’s bye on the horizon in Week 6, it makes sense to slow-play it, particularly with the relatively tepid likes of Miami (1-2) and Minnesota (0-3) next up on the the schedule. Carson’s past injury struggles may also be a factor in how much time he misses. Luckily, the Seahawks were prepared for this, adding depth in the form of one-time 1,000-yard rusher Carlos Hyde. The high-octane Seahawks should provide plenty of goal-line opportunities for Hyde, a 229-pound enforcer with 36 touchdowns on his NFL resume. There’s a reason Hyde is on his sixth team in four seasons — he’s a lousy receiver and won’t win many foot races with his lackluster 4.6 wheels. But as the de facto RB1 for one of football’s top offenses, the 30-year-old Hyde is more than deserving of plug-and-play status.

It was only a matter of time until Jefferson, who led college football in catches as an LSU Tiger last year, ripped the NFL to shreds. Precisely on cue, Jefferson went ballistic in a loss to Tennessee on Sunday, demolishing the Titans’ listless secondary for seven catches and 175 yards. After Jefferson left Week 1 starter Olabisi Johnson in the dust, the sky looks like the limit. Jefferson reached a top speed of 20.13 miles per hour on his 71-yard touchdown romp against Tennessee. We know Minnesota prefers to keep it on the ground, but that’s hard to do when the Vikings are playing from behind every week. Largely confined to the slot -- he has lined up inside on nearly 80% of his snaps -- Jefferson is a good match for the conservative Kirk Cousins, who has never been one to let it rip downfield. Remember how fond Cousins was of Jamison Crowder, also primarily a slot receiver, during his Washington tenure. No one was expecting Jefferson to come in and immediately replicate the production of Stefon Diggs, but that’s essentially what he’s done through three weeks. It’s a small sample size, but in the little we’ve seen of him, Jefferson definitely passes the eye test. 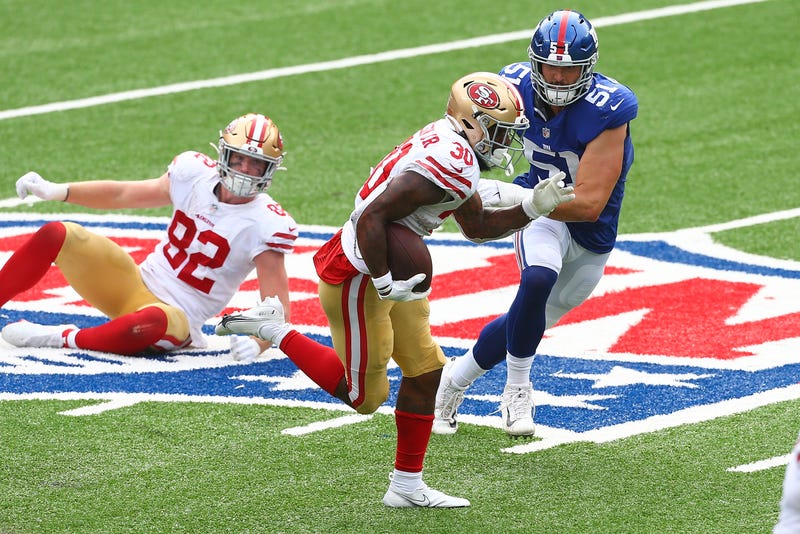 Wilson didn’t wow by any stretch Sunday — he averaged a pedestrian 1.3 yards on 12 rushing attempts — but he still proved plenty useful in the fantasy realm, finding the end zone twice to push his final tally to 21.9 PPR points. Not known for his receiving prowess — he entered Week 3 with a career 15-132-1 receiving line — Wilson made the most of his three targets against the Giants, securing all three for 54 receiving yards, which is more than he posted all of last season (34). The undrafted 24-year-old Wilson is no Christian McCaffrey, but based on his workload of 15 touches Sunday, he should remain a factor while Raheem Mostert and Tevin Coleman are both hobbled. Jerick McKinnon has looked spry in the early going with 6.9 yards per carry, but he’ll most certainly be on a pitch count after missing the previous two seasons due to injury. I wouldn’t spend my FAAB life savings on Wilson, but if your fantasy team is one of the many that’s been decimated by a biblical rash of early season injuries, he might be worth the squeeze.