Some years, the higher powers of fantasy football just aren't on your side. But this year, it doesn't seem as if they're picking any favorites. Practically every team in every fantasy league has dealt with injuries in some capacity this season, so consider yourself lucky if you can't say that about your own squad.

For those of you who did have Saquon Barkley or Christian McCaffrey or Raheem Mostert, running back help is now of the highest priority. And for those of you who have Davante Adams, Courtland Sutton, Sammy Watkins and other star receivers who suffered injuries of varying severity, you may need to dig a little deeper into your bench than you like. Perhaps a solution to both of those problems lies within the waiver wire.

And hey, just because you're one of the lucky ones who didn't have an injury bug spread around your roster doesn't mean you shouldn't be active on the waiver. Heck, you should probably be more aggressive, taking advantage of your relative health and using your pickups as insurance -- or even better (and slightly more evil) as trade bait.

There are plenty of names to choose from as the 2020 season continues to act in such a 2020 way. Let's take a look.

Be sure to check out last week's list of waiver wire pickups too. None of them will appear on this list, though some (most) of them are still worth adding if available. 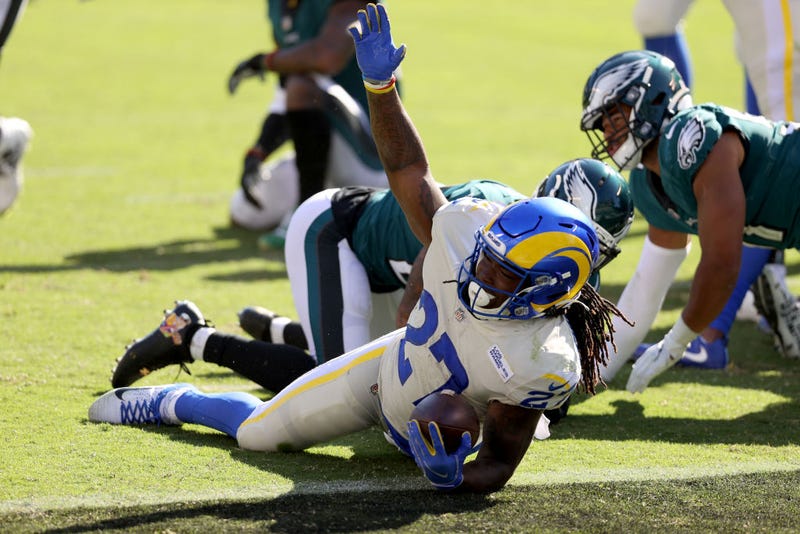 Two running backs whom I didn't mention in my introduction are Cam Akers and Malcolm Brown, who were owned by most fantasy football players going entering Week 2. However, after Akers (rib) left the game and Brown (finger) apparently dealt with some issues and was significantly outplayed by Henderson, it's back to the 2019 third-round draft pick as the individual to own in the Rams backfield.

This situation remains as volatile as ever, but Henderson's 121-total yard performance against an Eagles defense that's supposed to be good at defending the run makes us excited that he could finally break out, as many have expected. 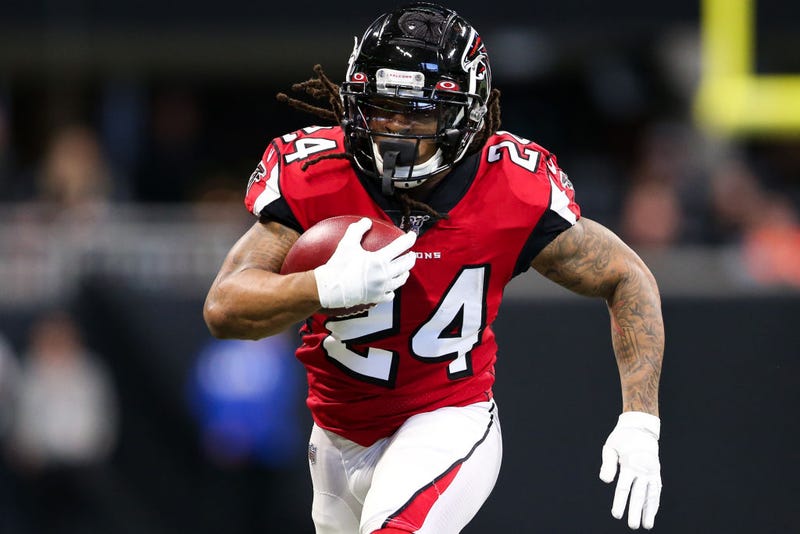 There are a number of teams that could potentially become Freeman's next team as his free agency seems to finally be coming to an end. The leading contender in my opinion would be the New York Giants, as they just lost Barkley for the year to a torn ACL and will bring Freeman in for a visit.

Should he land with the Giants, it's likely that he gets a feature back role right away, as the rest of the running back depth chart doesn't inspire too much confidence. Other teams such as the 49ers, Eagles and Chiefs wouldn't be as exciting in terms of his fantasy prospects. However, it's worth the gamble right now, especially if you're working with a depleted group of running backs. 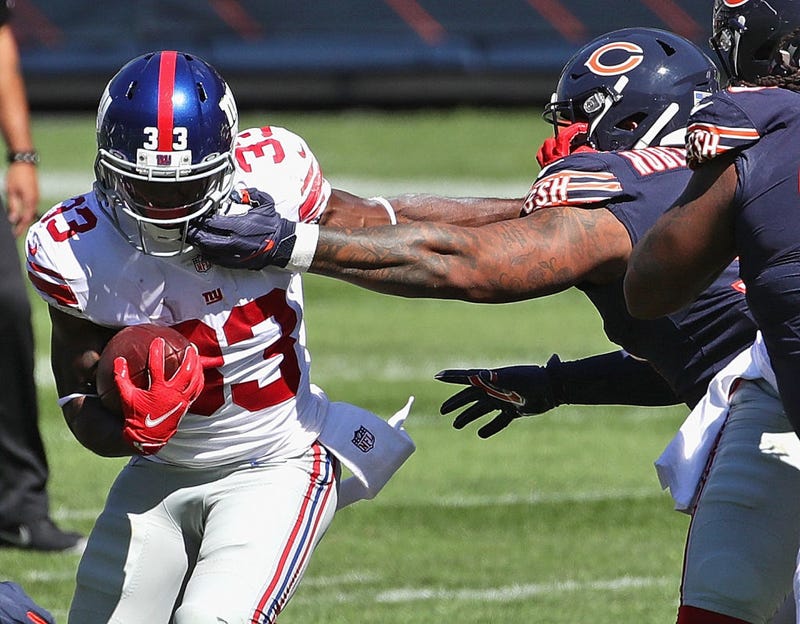 This is a situation I'm not too high on, especially because it seems likely that Freeman joins the party. If he doesn't though, then it will be interesting to see how the carries are divvied up between Lewis and Gallman. Lewis got all the running back touches after Barkley went down, but that's because Gallman was a healthy scratch. Lewis doesn't hold much promise as a feature back with a 5-foot-8, 195-pound frame and only one season in which he really held the title of a "lead" running back, leading the 2017 Patriots with 180 carries.

On the other hand, Gallman had more than 100 carries as a rookie and played the feature back role in 2019 when Barkley was dealing with injuries, turning the opportunity into a monstrous 24.8-point performance (1/2-PPR).

Whichever way the situation ends up, I'm not too high on either player. With that said, beggars can't be choosers right now. The advantage goes to Lewis if you have to choose between these two. 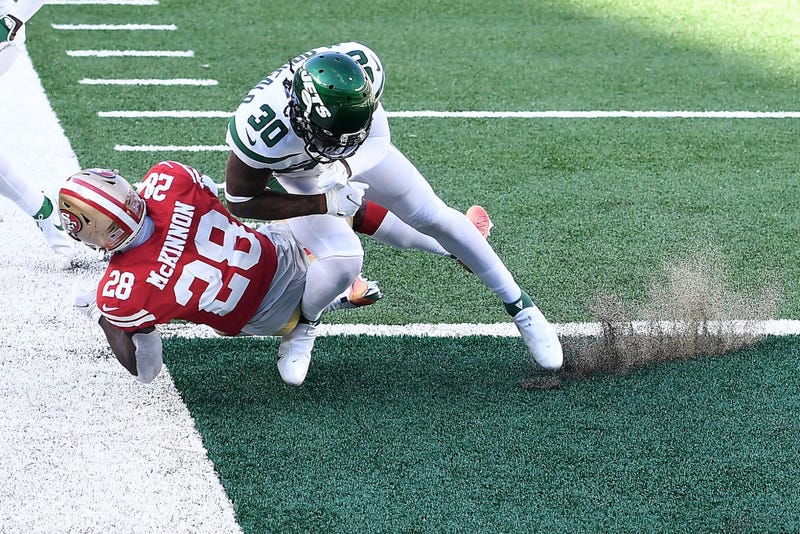 Injuries to Mostert and Tevin Coleman will force both of them to miss Week 3 -- and likely longer, though the severity of Mostert's injury hasn't yet been revealed in full -- meaning that McKinnon should be thrust into a feature roll. In the high-powered rushing offense that is the 49ers, any opportunity like this should be seized by fantasy owners, especially given the fact that San Francisco has continued to show loyalty to McKinnon through injuries.

McKinnon showed off his potential with a 55-yard run Sunday, and with a workload that should exceed double-digit touches, he has as high a ceiling as any waiver wire pickup. 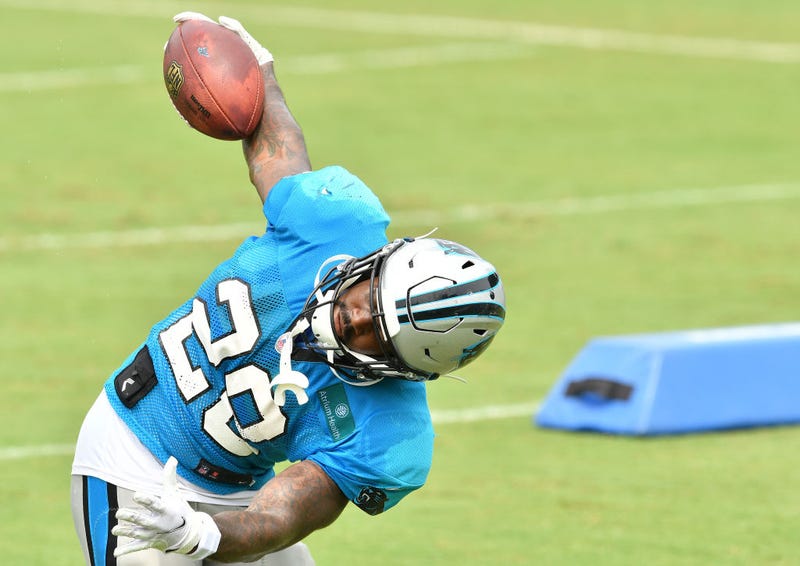 The handcuff you never knew you needed now has a big opportunity to put up big numbers. With eight catches on eight targets against the Buccaneers on Sunday, Davis proved his versatility is there. Throw in an increased workload now that could total some 15-20 touches per game while McCaffrey is injured, and you've got a startable running back for a good chunk of the season.

The other running back on the roster, Trenton Cannon, hasn't logged a single snap on offense to this point in the season. 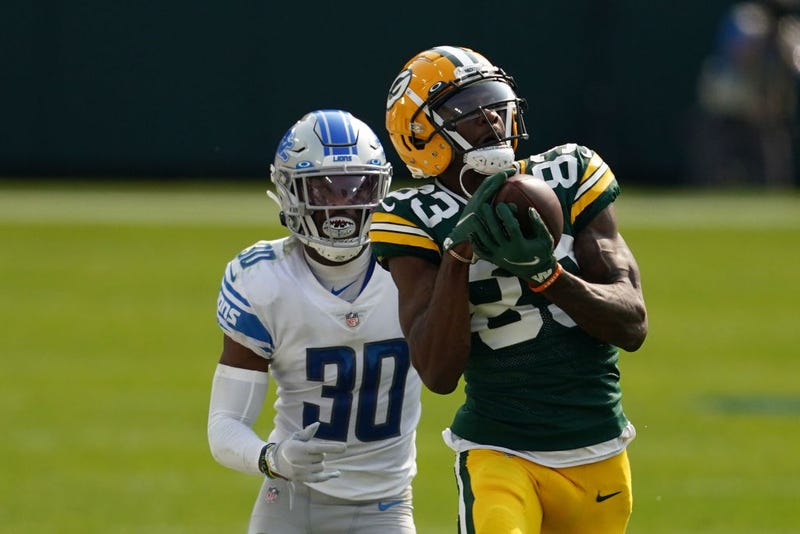 Valdes-Scantling had some standalone value even with a fully healthy Adams, posting two respectable stat lines through the first two weeks for a total of 160 yards and a touchdown on 13 targets. Though Adams' injury doesn't appear to be a serious one, Valdes-Scantling should still be someone to look for as a deep bench stash or in a good matchup. He had some good games with a healthy Adams in 2019 and can give you a good fantasy outing with just one deep ball. And with Adams' somewhat questionable injury history, Valdes-Scantling would immediately become a startable wideout if Adams missed any time. 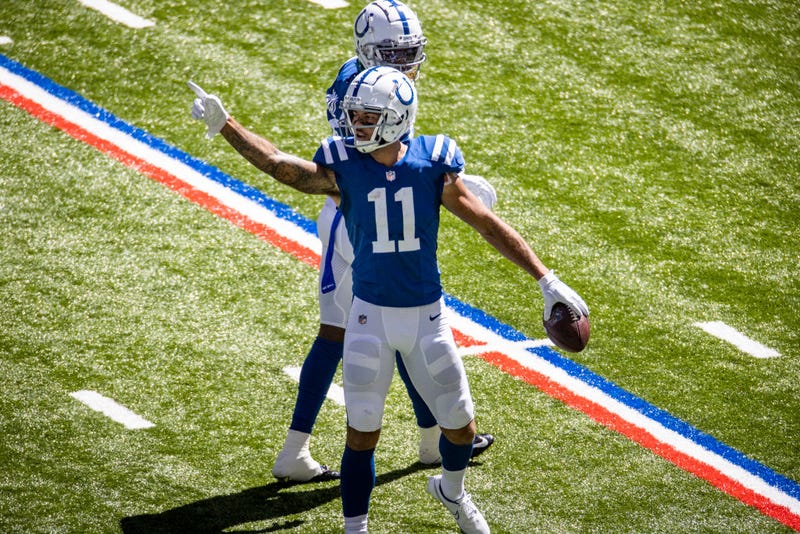 Through two weeks, Pittman and Parris Campbell are neck-and-neck in the race to be Philip Rivers' favorite target behind T.Y. Hilton. Now that Campbell has a PCL injury that will leave him sidelined indefinitely, Pittman has an opportunity to swallow up a lot of those targets for himself. He showed improved chemistry with Rivers in his second career game, hauling in four of his six targets for 37 yards. With a big frame that's similar to that of Mike Williams, who Rivers used to target frequently all over the field, Pittman can take advantage of his WR2 opportunity and translate it into solid fantasy value. 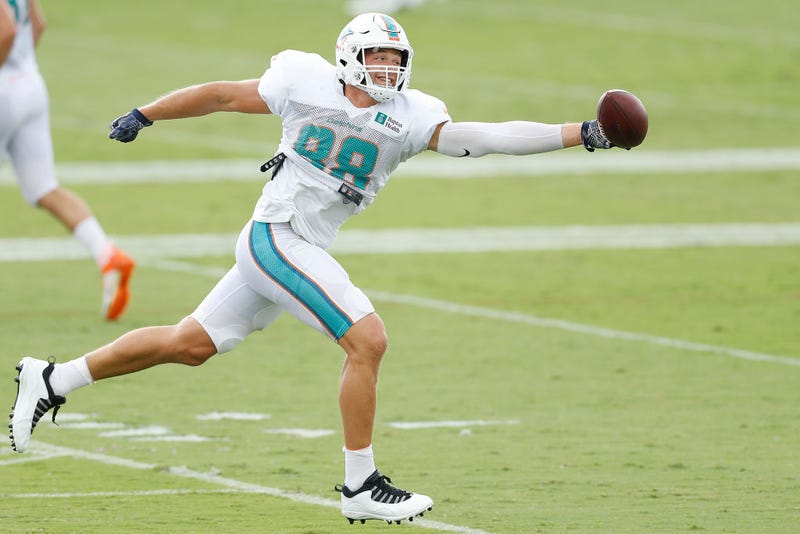 These ownership numbers might shoot really close to 100% after Gesicki's dominant performance Sunday in which he had eight catches on 11 targets for 130 yards and a touchdown. Gesicki showed flashes in 2019 -- he was the TE6 from Week 9 to the end of the year -- and he's currently in the top five most-targeted tight ends in 2020 with 16. He's also the most-targeted receiver on the Dolphins so far, as no wide receiver has more than 13. In a relatively shallow position, being the lead receiver on a team bodes well for Gesicki's fantasy success, and it's a surprise he's still available in so many leagues. 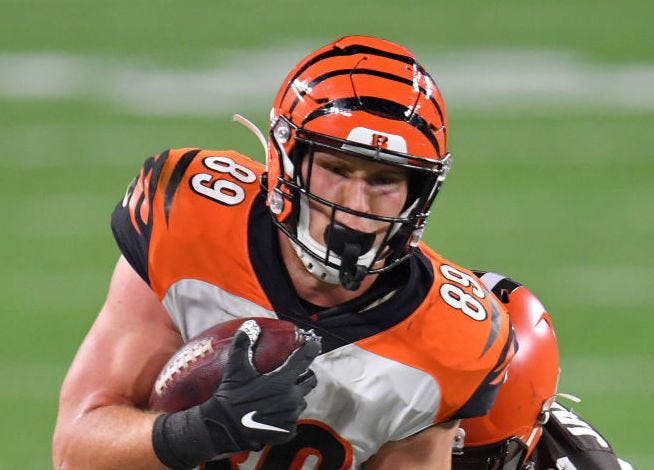 Continuing the trend of players with barely any ownership becoming relevant due to injuries, Sample filled in the void left by C.J. Uzomah after the Bengals' starting tight end left with an Achilles tear, which will keep him out for the season. That means that Sample, who drew nine targets and hauled in seven of them, will be the primary tight end going forward for rookie quarterback joe Burrow.

Before Uzomah was injured, he had drawn a solid share of targets from Burrow and found the end zone last Thursday. If you combine Uzomah's solid fantasy stat line through one-and-a-half games (eight catches on 11 targets) with Sample's strong outing in relief, that bodes well for the latter's fantasy prospects going forward.