There was some thought here that the defending Super Bowl champion Kansas City Chiefs had a chance to go 16-0 and repeat with another title, never ceding the top spot in the NFL power rankings here at RADIO.COM Sports.

It still feels pretty likely that Andy Reid, Patrick Mahomes and the Chiefs will enter the postseason as the odds-on favorites to win Super Bowl LV, but they won't do so with a perfect record after losing a 40-32 shootout to the division rival Las Vegas Raiders on Sunday.

The Chiefs are still 4-1 and have a defining 34-20 victory over the Baltimore Ravens in hand in Week 3. That said, a troubling trend is beginning to emerge -- the Chiefs had no problem getting up for the Ravens on Monday Night Football but perhaps have underestimated what they would be facing in two divisional matchups. They lost to the Raiders and narrowly defeated the Los Angeles Chargers in Week 2, despite the fact that Justin Herbert didn't learn he would be making his NFL debut until minutes before the game started.

Look, it wouldn't surprise anyone if the Chiefs rattled off 11 victories in a row after their first loss and finished 15-1. Under the NFL's new playoff format, they can't coast through the regular season. Last year, the No. 2 seed secured the Chiefs a first-round bye in the AFC Playoffs. It won't do that in 2020 with seven teams in each conference making the playoffs.

While we anticipate the Chiefs returning to the top spot in short order, for a week, a new team finds itself at the top of our power rankings. 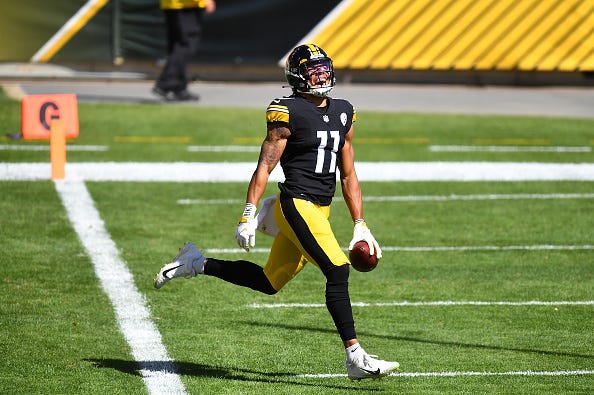 Quietly, the Steelers are undefeated

After an unplanned bye week, the Steelers returned with a vengeance in Week 5, defeating the cross-state rival Philadelphia Eagles, 38-29, with Ben Roethlisberger tossing three touchdowns. All three of those went to rookie Chase Claypool, who caught seven passes for 110 yards. A rookie out of Notre Dame, Claypool added a rushing touchdown for good measure. When you add in that Ray-Ray McCloud had 63 rushing yards on two carries, the Steelers have built a pretty deep group of skill position talent. Imagine if Mike Tomlin's 4-0 squad is able to secure a reunion with Le'Veon Bell. 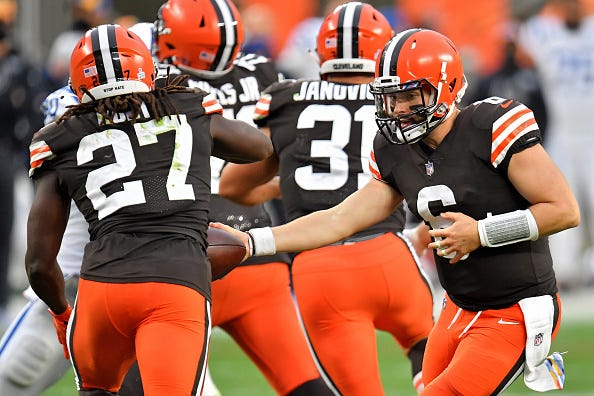 The Browns are on the cusp of the top five of our power rankings. Photo credit Jason Miller/Getty Images

Browns on the cusp of the top 5

It's pretty safe to assume that if Kevin Stefanski's Browns defeat the rival Pittsburgh Steelers in Week 6, they'll move into the top five, something that would have been unthinkable after they lost 38-6 to the Ravens in their season opener. Since that time, the Browns have scored 30 or more points in every game. They have flexed the muscle they possess on the ground with Nick Chubb and Kareem Hunt, and Baker Mayfield, Odell Beckham Jr., Jarvis Landry and Austin Hooper have all played key roles in one of the deeper offensive units in the sport. The only roadblock for the Browns right now is that while they're the No. 7 team overall, they're third among the AFC North teams. 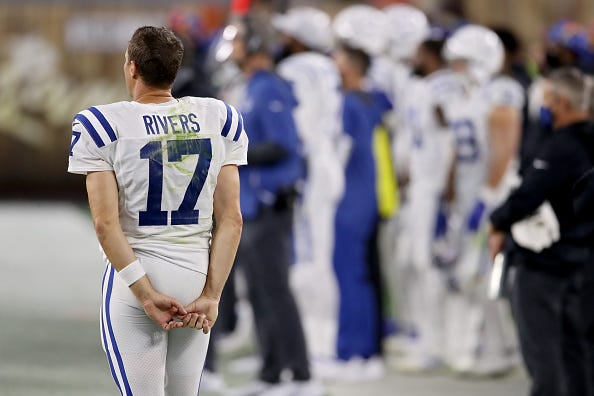 Colts still feel a quarterback away

Any potential buzz about the Colts as a darkhorse Super Bowl contender was halted Sunday, with a 32-23 loss to the Cleveland Browns. While we have little concern that Matt Eberflus' defense will bounce back, we're not as confident in the quarterback position. From here, Philip Rivers has had a Hall of Fame-caliber career. That said, the Colts didn't get that version of Rivers. They got the 38-year-old version, one who has thrown more interceptions than touchdowns in 2020. The Colts did give Rivers $25 million this past offseason, but you have to wonder how far away we are from Frank Reich considering making a change at quarterback to Jacoby Brissett. Realistically though, it's hard to imagine the Colts going toe-to-toe with some of the AFC's elite teams in January with either quarterback. You're constantly left to wonder where the Colts would be if they built the "Big Blue Wall" a few years earlier and still employed Andrew Luck. 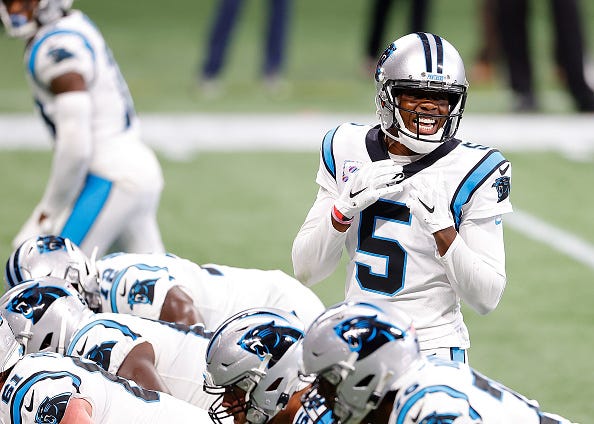 So, uh, how about the Panthers?

At the outset of the season, there was some thought that the Panthers could be in the race for Clemson quarterback Trevor Lawrence. Unless they lose out -- and perhaps even if they do -- they've played themselves out of that range with three consecutive victories. Rather shockingly, the Panthers have a top-six offense after five weeks, which leads you to believe that offensive coordinator Joe Brady will be a hot head coaching candidate this offseason. What's more, you're starting to get the sense that the Panthers could compete for a postseason spot when Christian McCaffrey -- who has been absent for all three of their victories -- returns from his high ankle sprain. 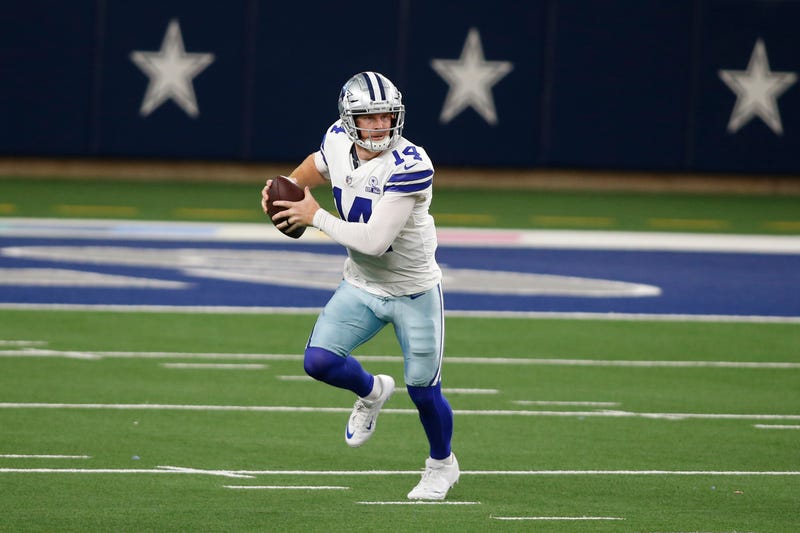 Andy Dalton will start for the rest of the season in Dallas. Photo credit Tim Heitman/USA Today

For as ugly as his finish in Cincinnati was, Andy Dalton did take the Bengals to the postseason in each of his first five seasons with the franchise. As he replaces the injured Dak Prescott, he inherits Amari Cooper, Michael Gallup and CeeDee Lamb. Though Ezekiel Elliott has had a slower start, perhaps Mike McCarthy will feel more compelled to lean on him with Prescott out. Of course, the ability to stay committed to the running game is largely based around not being in a shootout every week. To this point, Mike Nolan's defense has given up 34 or more points in four of five games, including to the lowly New York Giants this past week. Even with Dalton at the helm, the Cowboys have the offense to potentially win a historically weak NFC East. To this point, the same can't be said about the defense. 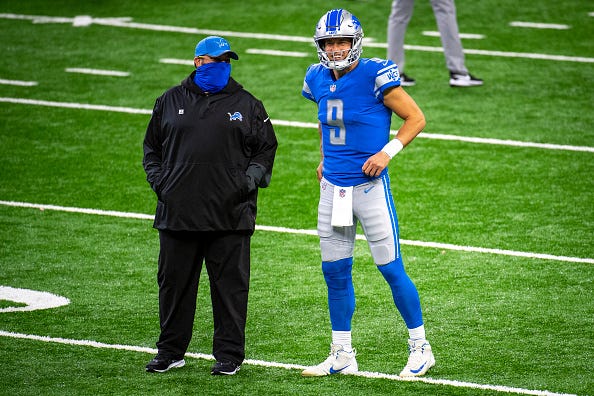 The Future in Detroit Hangs in the Balance

The Lions return from the bye week and are perhaps set for the home stretch of the Matt Patricia/Bob Quinn era. Heck, Matthew Stafford's future with the franchise is unclear. Through their first four games, the Lions appear more likely to play their way into the race for Lawrence than the NFC postseason. Understandably, Lions fans are disgusted, and you can bet that as Sheila Ford Hamp tries to put her stamp on the organization, she won't be content with a 5-11 season (or worse).