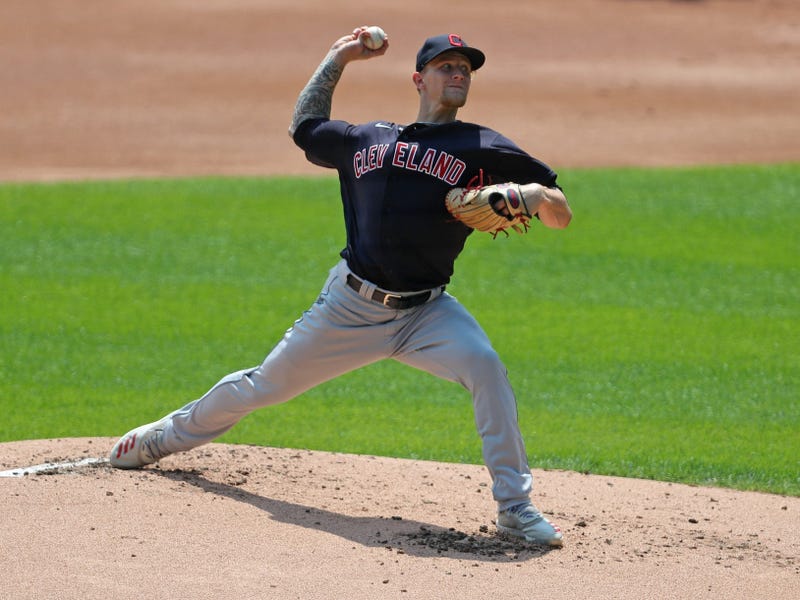 CHICAGO (AP) — Zach Plesac tossed six strong innings and the Cleveland Indians snapped a scoring drought with a six-run fourth in a 7-1 victory over the Chicago White Sox on Saturday.

The Indians had been blanked for 13 innings before Franmil Reyes and Jordan Luplow each hit a two-run homer in the fourth. Luplow was 0 for 21 with a walk this season before homering.

Domingo Santana added a solo homer in the eighth.

Plesac (1-1) allowed five hits and struck out seven in lowering his ERA to 1.29 this year.

The Cleveland pitching staff has allowed four runs or fewer in all 16 games this season.

Yoan Moncada homered in the eighth for Chicago. He has reached in 19 straight games dating back to last Sept. 25.

The Indians were held hitless through the first three innings before erupting for in the fourth. With one out and one on, Francisco Lindor doubled off Drew Anderson (0-1).

A wild pitch and a passed ball each scored runs. Reyes followed with his homer. Two batters later, Jordan Luplow, who struck out against Anderson in the third, connected for 6-0 lead.

STRONG DEBUTRHP Zack Burdi, a White Sox first-round pick in the 2016 draft, tossed a scoreless sixth inning with two strikeouts in his major league debut. Burdi, a native of nearby Downers Grove, was recalled from Chicago's alternate site at Schaumburg on Saturday morning.

TRAINER'S ROOMWhite Sox: LHP Aaron Bummer (biceps strain) was placed on the 10-day injured list before the game. Bummer had to exit in the seventh inning Friday night. The 26-year-old has been a primary setup guy for Chicago with a 1.23 ERA in seven games this season. No determination has been made as to how long Bummer will be sidelined.

UP NEXTCleveland ace Shane Bieber (3-0, 0.83 ERA) looks to win his fourth straight start Sunday night in the finale of the three-game series. RHP Lucas Giolito (1-1, 5.17) pitches for the White Sox. Bieber leads the majors with 35 strikeouts. It's the third-most strikeouts through three games in major league history. Nolan Ryan holds the record with 37 in 1973.___More AP MLB: https://apnews.com/MLB and https://twitter.com/AP_Sports