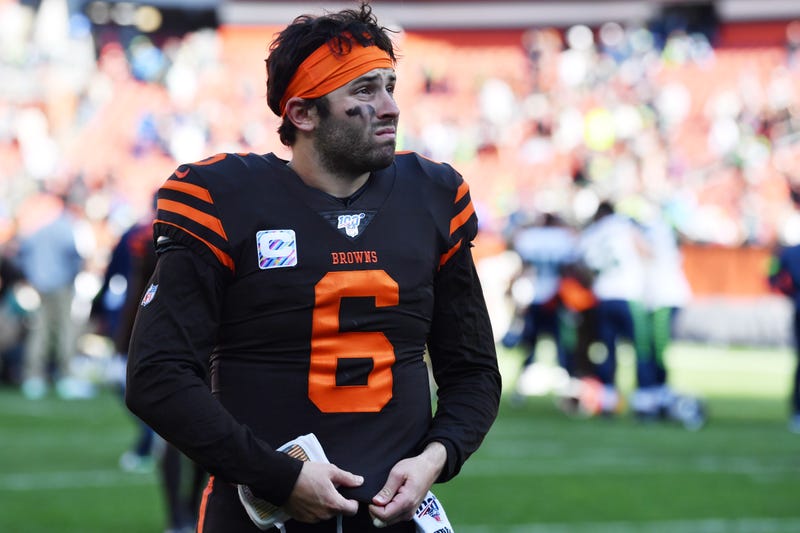 After stretching and going through warm-ups Mayfield stood with a ball cap and watched while teammates continued to go through drills.

“Just giving him a break physically. Just trying to get his body back a little bit,” Kitchens said.

The good news for Mayfield is the medical tests came back clean according to Kitchens.

“Everything was cleared the other day,” Kitchens said.

Fortunately for the Browns, they’re entering their bye week, giving them the luxury of allowing Mayfield to get some much-needed rest time to recuperate.

“To play quarterback in this league, you have to be mentally and physically tough, and Baker is that,” Kitchens said.

Garrett Gilbert and Eric Dungey handled the throwing during the portion of practice open to reporters.

What gives? – Rashard Higgins is just as puzzled as to why he didn’t play Sunday as fans are.

“I just didn't get in. I don't know why. I was a little surprised,” Higgins said. “I felt like I was ready San Francisco game. Little frustrating. I feel like I'm somebody that Baker can rely on, and when I'm in the game I can make a difference. It'll show next game.”

Kitchens said Monday that Higgins wasn’t in his doghouse and there was a package of plays for him against Seattle that they just didn’t get to. Tuesday Kitchens clarified the situation.

Higgins, who has caught 41 passes and 4 touchdowns from Mayfield in 14 games with the QB, is anxious to help a struggling passing game.

“I just know this offense needs me so I'm doing all that it takes to get back on the field and I should be out there next game,” Higgins said.

Ward ready – Cornerback Denzel Ward felt healthy enough to play against Seattle but felt it was best, “That those guys started” giving him an extra week to rest his hamstring.

“It’s been very irritating, just wanting to be out there with my teammates,” Ward said. “I’m looking forward to getting back and helping this team.”

Ward, who missed 4 games along with rookie corner Greedy Williams, is back to 100 percent and has been able to “open up.”

He expects to play against Tom Brady and New England Oct. 27.

XFL bound – Former Browns quarterback Brogan Roback and tight end Orson Charles were selected in the XFL Draft Tuesday. Roback was picked by the St. Louis Battlehawks and Charles by the DC Defenders.

Roback was with the Browns during the 2018 offseason and training camp and was one of the stars featured on HBO’s Hard Knocks Training Camp with the Cleveland Browns.