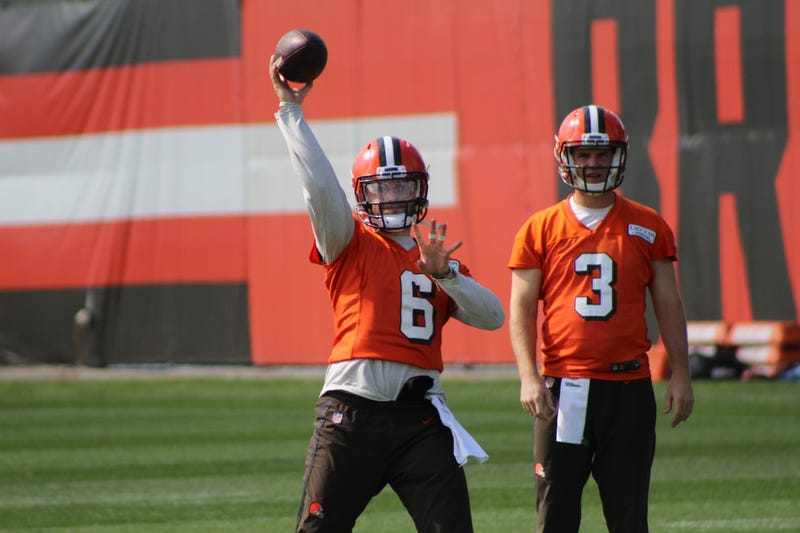 Mayfield, who was not wearing a wrap Tuesday morning, had the hand X-rayed after the game and the results were negative. He wore a wrap as he left FirstEnergy Stadium Sunday.

Mayfield appeared to suffer the injury with just under two minutes left in the first half when he was taken down in the end zone for a safety by Titans linebacker Cameron Wake but he remained in the game.

“He's relentless. He's a competitor,” Kitchens said. “One of the best things I can say about a person is being a relentless competitor and that's what he is.”

In the loss, Mayfield completed 25 of 38 passes for 285 yards with a touchdown and three fourth quarter interceptions, including a pick-six, that allowed the Titans to turn a 15-13 lead into a blowout.

Hollywood update – Receiver Rashard Higgins practiced Tuesday after being held out of the second half of Sunday’s loss due to an ankle injury suffered while blocking downfield for Jarvis Landry.

“I was in the right place but at the wrong time, I guess,” Higgins, who looked to be favoring it a bit during the portion of practice open to reporters, said.

Higgins caught two passes for 46 yards Sunday. He does not expect to miss any time and plans to play Monday night when the Browns travel to New York to face the Jets.

“I feel good, man,” Higgins said. “When Monday comes, I’m going to be out there.”

He was removed from the reserve/suspended list by the league office meaning the Browns would have had to create a roster spot for him had they chosen to retain him.

Fresh sod – The Browns groundskeepers were busy Tuesday replacing sections of sod in and around the practice fields in Berea after portions of the turf got chewed up during training camp.

The grass between the hashmarks on one of the three primary practice fields is being replaced as well as a few sections where bleachers were located during camp.