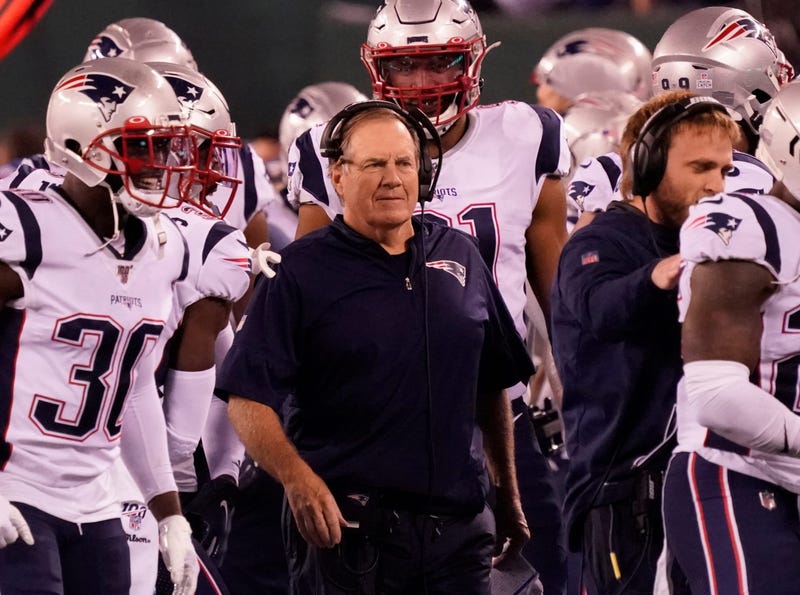 Belichick threw bouquets of compliments on the 2-4 Browns on a conference call Tuesday morning.

He was either delirious from the Patriots 33-0 laugher over the Jets Monday night or just buttering up the Browns for slaughter Sunday.

“The Browns have a lot of explosive players in all three phases of the game [that] make a lot of big plays,” Belichick said. “They’re very disruptive on defense, and pretty much everybody on offense can hit the home run from anywhere on the field. They’re really a tough team to prepare for on a short week, and we’ve got a lot of work to do. So it’ll be a big challenge for us. [General Manager John] Dorsey has really accumulated a high level of talent all the way across the board.

“We have five days now to do our best to prepare for a very good Browns team that has had extra time to prepare [with a Week 7 bye]. They’ve already practiced for us. They’re way ahead of us. We have a lot of work to do. They’re extremely well-coached, have a lot of great players. So it’s a big challenge for us.”

If you hadn’t watched a snap of Browns football this season and just listened to arguably the greatest coach of all time you’d think the roles were reversed – the Browns were undefeated and the Patriots under .500 with their backs against the wall and season on the line.

Their closest win was 16-10 over Buffalo. They’ve scored 30 or more on everyone else and their plus-175 point differential is the largest point differential through seven games in the NFL since 1920, according to the Elias Sports Bureau.

That’s what Freddie Kitchens and his football team is up against Sunday in Foxborough, Massachusetts.

Belichick meanwhile is preparing to face Myles Garrett, who has 9.0 sacks this season and 29.5 in 35 games and he had this thought when asked about the 2017 No. 1 overall pick.

“I’m thinking about I wish we didn’t have to play against him,” Belichick said. “He’s pretty much impossible to block. They put him in a lot of different places so you don’t always know where he’s going to be. But wherever he is, you better find him and block him, or he’ll ruin the game.”

How effusive in his praise of the Browns was Belichick?

He called punter Jaimie Gillan, “A weapon,” adding, “I didn’t know much about Gillan, but this guy can change field position.”

The addition of Odell Beckham Jr. was supposed to give quarterback Baker Mayfield an explosive go-to sure-handed option, yet Beckham has just 1 touchdown in 6 games despite leading the team with 29 catches. He’s second in receiving yards, 3 behind Jarvis Landry.

“He’s a game-breaker from any place on the field. Very hard to tackle,” Belichick said. “You saw the play against the Jets where he took an RPO slant or seam route and goes 90 yards for a touchdown. He can score from anywhere on the field, running by you, making acrobatic catches or catching a short pass and breaking tackles and getting through the defense that way.

“He’s a dynamic player, and we played against him before. He’s a tough guy to handle. I have a ton of respect for him as a football player.”

While Beckham commands the attention, Belichick recognized Landry, and running back Nick Chubb, who has 6 touchdowns and is averaging 5.3 yards per carry this season.

“It’s a good receiving group,” Belichick said. “Landry is certainly another highly targeted player. Certainly [you] can’t have a conversation about the Browns offense without talking about Chubb. That guy’s a really impressive player every time he touches the ball, which is a lot.”

To say Mayfield has struggled in his sophomore season would be kind but Belichick continued to pile on the compliments despite Mayfield leading the league in interceptions with 11 and carrying a 56.6 competition percentage into a game against a Patriots defense that has an astonishing 18 interceptions this season.

“Baker’s a really smart player. Has a lot of talent, can make all the throws, terrific arm, tough,” Belichick said. “He’s taken some hits and hangs in there, and [he] can make extended plays with his legs to either buy more time to throw or scramble for key first downs in the red area, on third down, things like that. So he’s a big threat and a tough guy to handle.”

Mayfield is just 9 of 29 or 31 percent in the red zone with 3 touchdowns and 3 interceptions this season but Belichick is looking beyond the numbers.

“He’s obviously smart,” Belichick said. “Coach Kitchens gives him a lot of latitude at the line of scrimmage to change plays and make adjustments and things like that. You can see he’s very much in control of the offense and the line of scrimmage procedure, whatever it is exactly they’re doing, but clearly he’s making good decisions and getting the team into good plays or out of bad ones, however you want to look at it. Execution of the RPO game, things like that have been impressive. Second-year player. He’s doing a lot of good things.”

Belichick sees the talent everyone else did this offseason when the Browns were declared the next big thing in the NFL.

Just don’t count on it Sunday against Belichick and the Patriots.