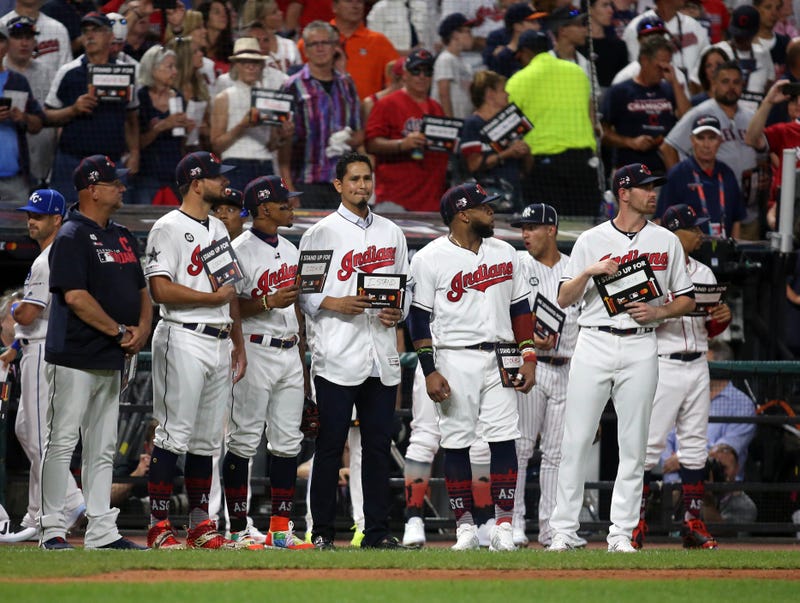 July 10, 2019 07/10/2019 5:07 am
CLEVELAND, Ohio – Carlos Carrasco is standing up to cancer and he isn’t alone.
The Indians’ right-hander was saluted in the fifth inning of the All-Star Game on Tuesday as part of Major League Baseball’s “Stand Up to Cancer” campaign. The 32-year-old was diagnosed with leukemia in June.
Carrasco stood on the field, holding a sign that read “I Stand” with the Indians’ four All-Stars and manager Terry Francona by his side. They were holding signs that read “Cookie.”

“He's a really special person,” Shane Bieber said after being named All-Star Game MVP. “He’s one of the best people I've ever met in my life. Nothing but respect for him and we're standing with him and love him.”

Carrasco’s “Cookie” nickname is fitting, because everyone tends to smile when he’s around. His teammates look up to him, he’s a fan favorite and the support he’s received since making his diagnosis public is proof.

“It puts everything in perspective,” American League manager Alex Cora said. “We get caught up on wins and losses and pennant races, all that stuff, rivalries, and then that happens. There’s more than baseball in life. We’re thinking and praying for him and his family. Hopefully he can get back on the field sooner rather than later.”

Carlos Carrasco gets a huge ovation during the Stand Up to Cancer presentation, with his All-Star teammates by his side pic.twitter.com/QxwdIZIdOd

Carrasco was recently cleared to resume strength training and throwing activities as long as he can tolerate them. Since his diagnosis, he’s spent time with children who are dealing with leukemia.

Bieber may have won the MVP award, but he knows how valuable Carrasco is, not only on the baseball field, but in every aspect of life.

“For him to be doing what he's doing and kind of turning it over on its head into a positive light and spending more time at the children's hospital and spending time with kids, it's something only he would do.”