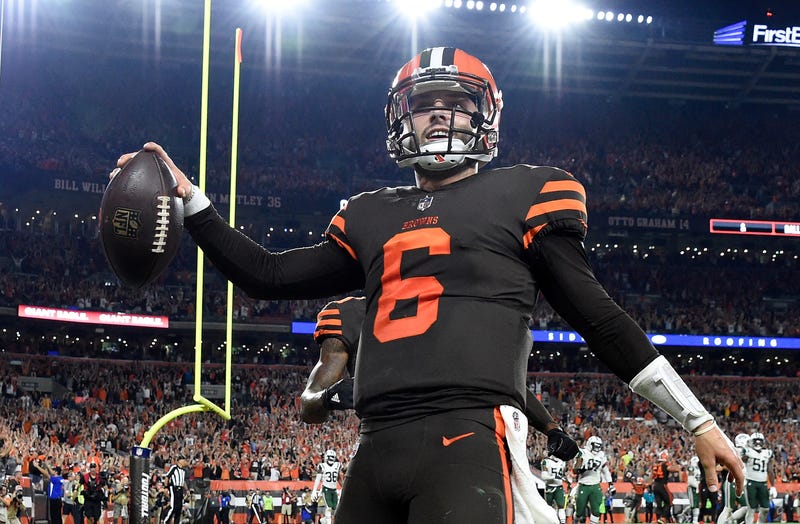 April 17, 2019 04/17/2019 9:46 pm
Cleveland, OH (92.3 The Fan) – After being the outcast of the NFL’s national TV schedule for nearly a decade, the Browns will make four appearances in primetime this fall – two on ESPN’s Monday Night Football and once each on NBC’s Sunday Night Football and Fox’s Thursday night simulcast with NFL Network and Amazon Prime.

Thanks to the emergence of Baker Mayfield, who broke the league's rookie touchdown passing record, the Browns winning five of their last seven games in 2018 and the addition of Odell Beckham Jr. this offseason, they are America's team and in demand by the NFL's TV partners.

ESPN will televise Cleveland’s week two trip to New York against Sam Darnold, Gregg Williams and the Jets on Sept. 16 and their week five flight west to San Francisco Oct. 7 against the 49ers.

The last time the Browns appeared on Monday Night Football, they lost in dramatic fashion to the Baltimore Ravens, 33-27, at FirstEnergy Stadium on a kick-6 that saw a potential game-winning 50-yard field goal try blocked and returned by Will Hill for a touchdown as time expired.

The Browns make their triumphant return to Sunday Night Football in week 3 when they host the defending NFC champion Los Angeles Rams at 8:20. It’ll be just the second appearance for the Browns on Sunday night since NBC took over the telecast.

Weeks two and three will mark just the second time in franchise history that the Browns play under the lights in consecutive weeks. They first did it Nov. 6 and Nov. 17 in 2008, a season that saw the team appear five times at night.

The fourth primetime game comes in week 11 – Thursday Nov. 14 against the Steelers at FirstEnergy Stadium with an 8:20 kickoff. Fox will broadcast the game, which will be simulcast on NFL Network as well as streamed by Amazon Prime.

Cleveland’s Dec. 15 trip to Arizona is scheduled for a 4:05 kickoff on CBS.

The remaining eight games of the schedule feature 1 p.m. kick offs starting with the opener Sept. 8 against the Tennessee Titans.