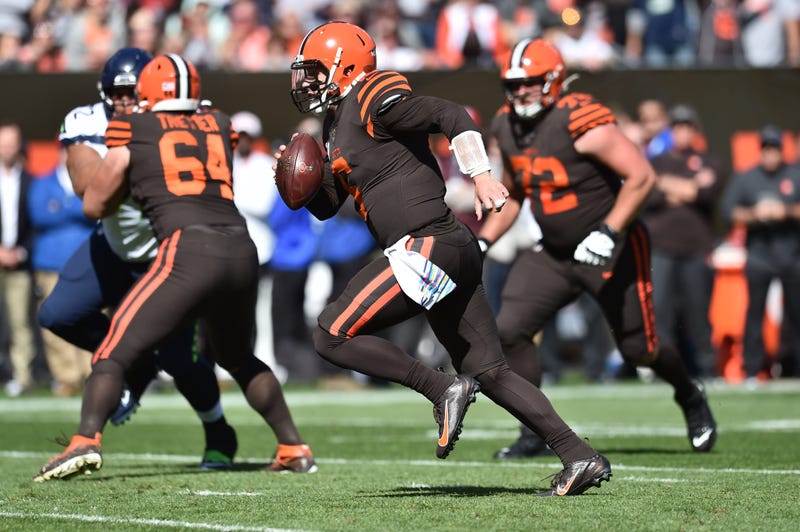 Baker Mayfield threw three interceptions – with only 1 likely his fault, the Browns turned it over a total of four times, had a punt blocked, a multitude of penalties and blew a 20-6 second quarter lead to lose for the fourth time, 32-28 to the Seattle Seahawks.

Mayfield orchestrated three touchdown drives to open the game for the Browns before the roof caved in.

Overall Mayfield, who was checked for a left hip injury in the third quarter, finished 22 of 367 for 249 yards, a touchdown, rushing touchdown and the three picks.

Russell Wilson completed 23 of 33 passes for 295 yards and a pair of touchdowns to Jaron Brown while adding 31 more yards and a score on the ground in the win to push them to 5-1 on the season.

Dontrell Hilliard opened the game with a bang - a 74-yard kickoff return to set the Browns up first and 10 at the Seahawks 23. Three plays later Nick Chubb ran it in from 7 yards out for the 7-0 lead thanks to a nice seal block on the edge by Odell Beckham Jr.

Seattle answered with a 7-play, 75-yard drive capped by Russell Wilson’s 16-yard touchdown run that pulled the Seahawks within 7-6 but kicker Jason Myers pushed the PAT into the Dawg Pound right.

After a third down pass went through Beckham’s hands, Mayfield zipped a 26-yard completion on fourth down Jarvis Landry to keep the drive alive before the quarterback took it in himself from 10 yards out for a 14-6 advantage. It was Mayfield’s first career rushing TD.

Myles Garrett blew up the Seahawks’ second drive when he dropped Wilson for a 4-yard loss, his eighth sack of the season, on second down, that led to the first punt of the afternoon. Garrett later added another sack to thwart another Seahawks possession.

Mayfield found tight end Ricky Seals-Jones for a 31-yard score after Chubb ripped off a 52-yard carry giving him 6 runs of 40-plus in his young career, but Austin Seibert missed his first kick since Week 1 – a PAT wide left, again, into the Dawg Pound.

The fourth offensive drive ended when Beckham had a second third down pass go through his hands, although the throw from Mayfield was behind him, and the Seahawks blocked Jamie Gillan’s punt and recovered at the 21. Cleveland’s defense held thanks to a big tackle of Wilson by Sheldon Richardson at the 2 on second down forcing a Myers 20-yard field goal to cut the Browns’ lead to 20-12 with 7:25 remaining in the first half.

Seahawks cornerback Tre Flowers picked off Mayfield to set Seattle up at their own 46 when Beckham was taken out of the play by a defender, but the defense forced a 3-and-out and no damage was done.

Beckham made a sensational catch on the sideline that replay upheld for a 41-yard gain to the Seattle 39, but the opportunity was wasted when Mayfield threw his third red zone interception of the season. Mayfield tried to thread the needle to Jarvis Landry but Seahawks cornerback Shaquill Griffin deflected it to fellow corner Tedric Thompson.

Seattle raced down the field in 8 plays and 1:08 to pull within 2 on a Wilson to Jaron Brown 17-yard touchdown but C.J. Prosise was stopped short of the goal line on the 2-point try keeping it 20-18 Browns at the half.

Mayfield went to the locker room after completing a screen pass to Chubb, that was fumbled and recovered by Seahawks defensive end Ziggy Ansah, to be evaluated for a left hip injury. Seattle turned it into 7 and a 25-20 lead when Wilson and Browns hooked up for a second time – from 6 yards out with 6 minutes left on the clock in the third quarter.

Mayfield suffering the injury scrambling for an 8-yard gain.

Olivier Vernon stripped C.J. Prosise and Devaroe Lawrence recovered at the Seattle 45 on a third and 1 late in the third quarter.

The Browns ultimately were denied when Chubb was stopped on fourth and goal at the one, which followed a bizarre sequence of events. On third down Seattle was called for an illegal substitution, Landry appeared to break the plane of the goal line with the ball before fumbling into the end zone. Chubb appeared to score on the fourth down try but Kitchens challenged the third down call that Landry didn’t get in.

The call was upheld, and Chubb didn’t get in again until he crashed in from a yard out with 9:02 remaining. Mayfield’s 2-point try to tight end Demetrius Harris regained the lead at 28-25, ending a 19-0 Seahawks spurt.

Seattle regained the lead for good on Carson’s 1-yard TD run with 3:30 to go.

Mayfield’s third interception came on the ensuing possession that saw his pass deflect off Hilliard’s hands and into the arms of Seattle’s KJ Wright. The Seahawks ran out the clock from there.