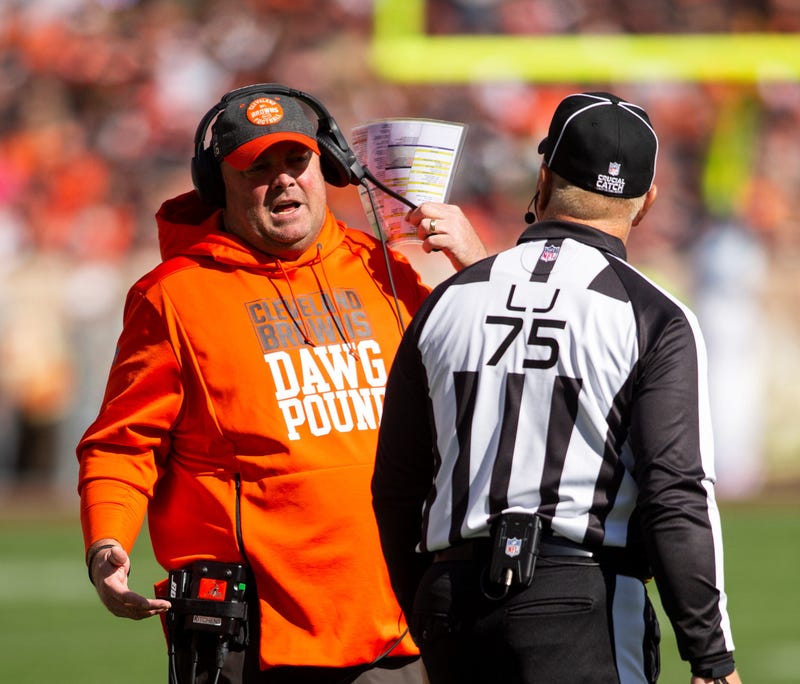 And Sunday afternoon at FirstEnergy Stadium it was as bad as it gets.

Whether it was a phantom illegal blindside block call on Jarvis Landry, not winning a challenge on a potential Landry touchdown, Morgan Burnett called for a horse collar when he had Russell Wilson by the back of his jersey with is right hand and left hand over Wilson’s left shoulder or Nick Chubb being tackled by the facemask on a fourth and goal with no call made – that was a mouthful – the officiating was horrible at best,

Head coach Freddie Kitchens refused to say much about it after his team committed 4 turnovers and blew a 20-6 lead in a 32-28 loss to the Seattle Seahawks.

Kitchens’ reluctance was handled by his players starting with quarterback Baker Mayfield, who threw 3 interceptions – 2 of which went off his own teammates’ hands.

“The refs are never an excuse,” Mayfield said. “I will probably get fined for saying this, but it was pretty bad today. The guy is squared up with him, running at him and he is lowering his head into Jarvis. What is [Landry] supposed to do? Avoid him? This is not bull fighting. I don’t know. It ticks me off.”

The blindside block on Landry in question occurred in the third quarter on a second and 9 from their own 22 that wiped out a 4-yard catch by Nick Chubb that would’ve set up third and 9. Instead it turned into second and 22 and killed the drive.

Defensive tackle Sheldon Richardson was more direct about the men in stripes.

“I don’t know what them penalty calls [were],” Richardson said. “On a few of them. It’s just tough. They let other teams play football but us in our own stadium. It’s just that simple.”

The Browns were flagged 9 times for 83 yards. The Seahawks got called 10 times for 65 yards.

Richardson was asked if the flags are throwing them off their game.

When asked to elaborate Richardson responded, “Watch the film. Every time we get momentum it’s always something. Phantom [call] here, holding there, whatever the case may be. Roughing the passer when the quarterback still got the ball in his hand. It’s football. It’s when you leave it up to judgement calls that’s what happens. You take the game out of the player’s hands and put it in the referees. It’s just that simple. It’s football. It’s violent. It’s aggressive. It’s what it is. It’s barbaric and people want it to be nice.”

Early in the fourth quarter Landry thought he scored on a quick slant from Mayfield, but it was ruled a fumble, recovered in the end zone by Chubb which by rule means the ball is brought back to where it was fumbled inside the one. Replays showed Landry broke the plane of the goal line with the ball before losing control, but the original call was upheld. Seattle had 12 on the field, which gave the Browns another shot on fourth down, but Chubb was stopped.

“It is pretty obvious to me, but that wasn’t the call,” Odell Beckham Jr., who caught 6 of 11 targets for 101 yards, said. “We don’t sit here and talk about the referees. I have never been one to do that. The call was what it was. You have to respect the call and keep it moving. It is tough.”

Beckham wasn’t going to waste time worrying about the officials.

“It is like complaining about life. You can complain, but is it going to get anything done?” Beckham said. “There is nothing that can be said and there is nothing that we can do right now to change any call. It’s the bottom line so why would I waste time even talking about it?”

The sequence didn’t cost the Browns anything more than time because they forced a quick 3 and out and the Seahawks shanked a punt. Chubb ran twice for 21 and then 3 yards to put the Browns back in front 28-25.

Safety Damarious Randall tried to toe the company line, but even he found it hard not to state the blatantly obvious.

“Those calls change the impact of the game. I understand people make mistakes, but, it’s a tough sport out here and we just ask to get everything officiated fairly.”

The Browns created plenty of their own adversity Sunday which ultimately cost them the game.

The officials just piled on.