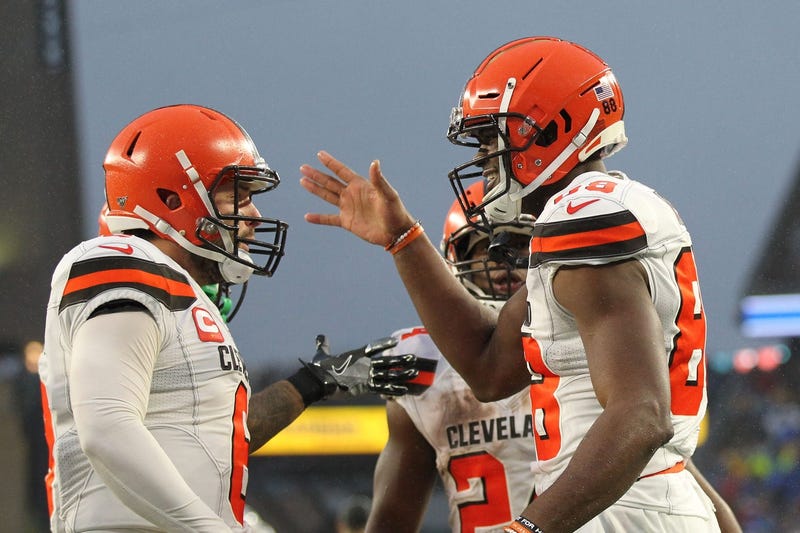 Their backs are already against the wall, and at 2-5, a loss Sunday to the Broncos would all but sink their season.

“We are 2-5. We have to win one game at a time,” quarterback Baker Mayfield said.

Their last trip to Denver a year ago was successful, a 17-16 nail biter that kept faint playoff hopes alive.

“Do you all remember when Jabrill Peppers got that sack at the end,” receiver Rashard Higgins said. “That was fun. It was just like the game was done right there and then. Just that feeling of winning, we need that feel back around here. This is a big game for us.”

The Browns haven’t had much fun in 2019. They’ve wilted under the spotlight and the stresses of early season struggles are starting to show.

“We need this win, man,” Higgins said. “They've got a good defense and we need to show what we're about. Our offense needs to get up and going. Our defense has been doing a hell of a job. We need to put up some points on the board and come out with a W.”

Although there is much more season left this time around, winning in the mile-high air is critical to keep their goals alive and well in 2019.

“All of them are equally important from the first one to the last one,” receiver Jarvis Landry said. “I just think that now we are in this situation and we have to find a way to get out of whatever this is that we are in. Yes, this one is definitely important for us and to start to create the momentum to build for the rest of the schedule.”

The Broncos lost Joe Flacco, who was placed on injured reserve Friday, and backup Brandon Allen will take his first regular season NFL snaps against the Browns.

“He has never taken an NFL snap, but he is in the league for a reason,” defensive tackle Sheldon Richardson said. “[You] Treat them all the same.”

The Broncos will likely try to pound the ball on the ground with their 2 backs – Phillip Lindsey and Royce Freeman, who have totaled 851 yards, have averaged 4.3 yards per carry and scored 6 touchdowns between them.

That could be a problem for the Browns, who rank 29th against the run allowing an average of 143.3 yards per game.

“Lindsay is a smaller guy but he runs with a lot of power and explosiveness. He can beat us out in the open field, and he is hard to catch and bring down,” linebacker Joe Schobert said. “They do a good job. They have a bunch of schemes. They use their fullbacks and tight ends very well. They have a good a fullback and lead backer. When they are able to get a good run scheme and you do not fit it properly, they can make you pay because the backs have explosion going up the field.”

Mistakes have been costly in 2019 – penalties, turnovers, lack of focus and attention to detail – which has left Mayfield as frustrated as ever and hamstrung the offense from living up to its potential.

“It has been the biggest problem for us of not being able to get into a rhythm and be consistent,” Mayfield said. “The good teams and good offenses are consistent with what they do, find completions, continue to get the ball out to where then when they do get their shots, they can call them and feel comfortable about it. We have not done that yet. We are going to turn it around.”

This week Mayfield has been preaching a sense of urgency to his teammates.

“I think that should be the case all of the time,” head coach Freddie Kitchens said. “We only have but 16 of these games so the sense of urgency should be in how you prepare and how you go out on the field to practice. I think Baker does that for the most part on a consistent basis. I definitely think it is continuing, yes.”

Kitchens admitted their preparation from week-to-week has been inconsistent and that is something they’ve been working hard to change in recent weeks.

“I definitely think there are better weeks than others, and that goes back to some of the things we are trying to clean up is work on our preparations, work on our execution during the course of practice so when it gets to Sunday it is not a surprise that we are executing,” Kitchens said.

Getting Mayfield and Odell Beckham Jr. going remains a mystery and a priority. Beckham leads the team in receptions and is second in yardage but has just 1 touchdown reception this season.