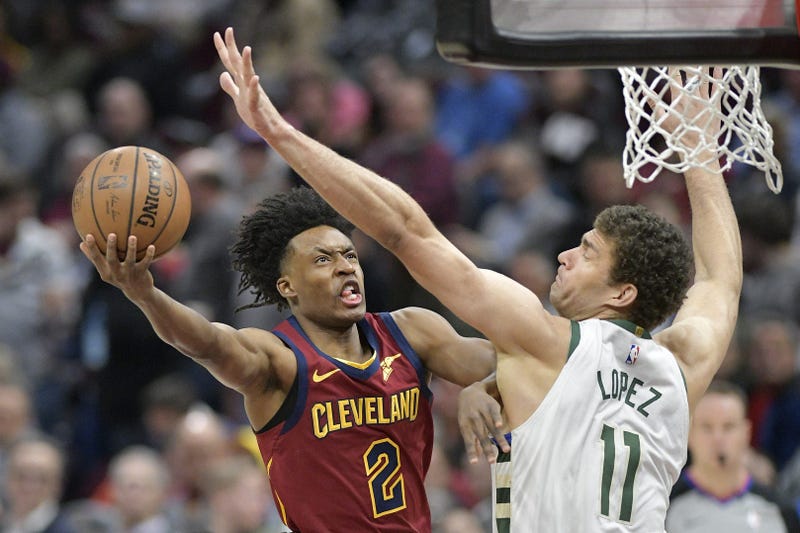 March 21, 2019 03/21/2019 1:32 am
Cleveland, OH (92.3 The Fan) – The Cavaliers beat the Bucks 107-102 on Wednesday night with an ending that looked familiar – with the rookie taking over.
Collin Sexton scored five points down the stretch, set a record and led his team to their 19th victory of the season. The Young Bull finished with 25 points on the night. He's scored at least 23 points in seven-straight games, which is a Cavs' rookie record. The last rookie to score 23 points in seven-straight games was Tim Duncan. Watch the record breaking shot below:

Sexton helped close out the Pistons on Monday night and didn't shy away from the moment tonight against the best team in the Eastern Conference. He wasn't the only Cavalier who came to play. Jordan Clarkson scored 23 points off the bench and Brandon Knight finished with 13 points. The Cavaliers are 19-53 on the season.

The Bucks were without MVP candidate Giannis Antetokounmpo and Malcolm Brogdon.

Two Records – Not only is Sexton the only rookie in Cavs' history to score 23 or more points in seven-straight games. He broke Kyrie Irving's record for most threes by a rookie earlier this season.

"It's pretty cool, but we got the win against a number one team, so that's even better," Sexton said. "I wasn't worried about it because when you worry about it then you start pressing. I just let the game come to me, knocked down open shots whenever the ball came around."

Thompson's return – Tristan Thompson played for the first time since January 16. The veteran finished 3-for-3 from the field with seven points and six rebounds in 12 minutes. He didn't play in the second half. Head coach Larry Drew said before the game that Thompson was on a minutes restriction. Thompson said he never suffered a setback, even though he missed 26-straight games with left foot soreness.
Love Injured – Love was hit in the head late in the first half. He stayed on the court afterwards and finished the quarter. He started the second half, but went back to the locker room early in the third quarter and didn't return. The Cavs didn't give an update after the game.
Home Sweet Home – The Cavaliers have won six of their last eight home games. They only have four games left at The Q this season.
Up Next – The Cavaliers play the Clippers Friday at The Q.