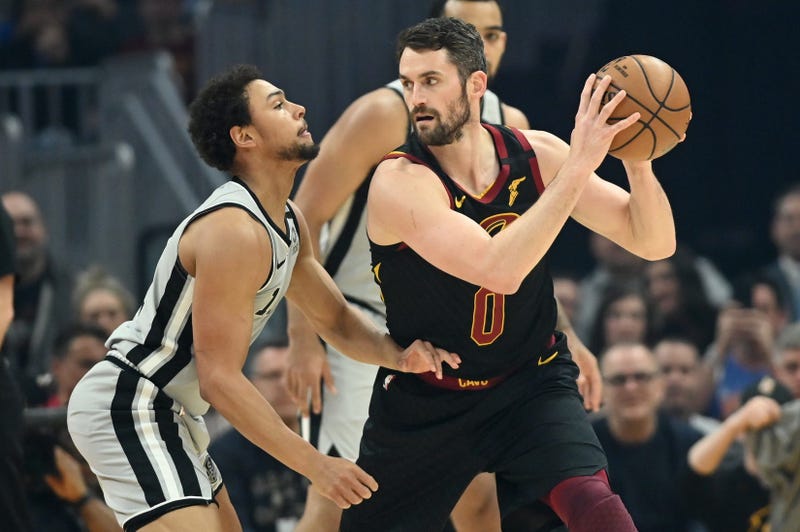 Kevin Love’s 3-pointer with 1:50 remaining in OT helped clinch the Cavs’ second win in as many nights.

It wasn’t a great shooting night for Love, who missed his first seven shots from the field. He found his legs and drilled the most important shot of the game. He finished with 14 points and 18 rebounds.

“It just means that we can. I think that’s the biggest thing, the belief in what you can accomplish,” Cavs head coach J.B. Bickerstaff said after the game. “We’ve shown that we can put together some really good stretches against some really good teams. We’ve played some tough teams since we’ve been here at home, well-coached teams, talented teams, and we were able to find a way. It lets you know and it gives you that confidence that you are capable of winning and winning tight games.”

The Spurs didn’t make it easy for the home team.

Cleveland took the lead four times in the final 2:26 of regulation, just to see San Antonio tie the game each time.

Matthew Dellavedova answered with a huge 3-pointer that gave Cleveland the lead, but San Antonio didn’t go away.

Collin Sexton made two critical free throws that gave the Cavs a 118-116 lead with 3.2 seconds remaining. Gay answered with a 20-foot jumped to force overtime.

Drummond led the Cavs with 28 points and 17 rebounds. He returned to the lineup after missing the past three games with a calf strain.

Sexton had 26 points, but also struggled from the field, making just 8-of-19 shots and seven turnovers. He went 9-of-11 from the free throw line.

It wasn’t the prettiest game for the Cavs, but they did just enough to get the win.

Cleveland led 35-18 at the end of the first quarter. San Antonio slowly fought their way back before going on a 13-2 run to take the lead early in the third quarter.

The Cavs and Spurs went back and forth the rest of the way. There were 15 ties and 10 lead changes.

Larry Nance Jr. finished with 19 points and 10 rebounds off the bench. The Cavs had seven players score 10 or more points.

The Cavaliers improve to 19-45 on the season and 11-25 at home. They have the same number of wins they had last season with 18 games left.

Dellavedova had another big night for the Cavs. He finished with 14 points and 11 assists. It was the seventh double-double of his career.

Delly had a career-high 14 assists in Saturday’s win over the Nuggets.

He also made critical free throws in the fourth quarter and overtime to help the Cavs clinch the win.

The Cavaliers had four players finish with a double-double in the same game for the first time since March, 24 1990 against the Nets.

Tristan Thompson returned to action on Saturday, after missing three games with a knee contusion. His return lasted less than six quarters.

Thompson left Sunday’s game against the Spurs in the second quarter after suffered a right eye injury. Keldon Johnson hit Thompson in the face.

The Cavs’ big man stayed down on the court for a minute before being helped to the bench. Thompson went to the locker room with head trainer Steve Spiro a few minutes later and didn't return.

The Cavaliers play the Bulls on Tuesday in Chicago at 8 p.m.