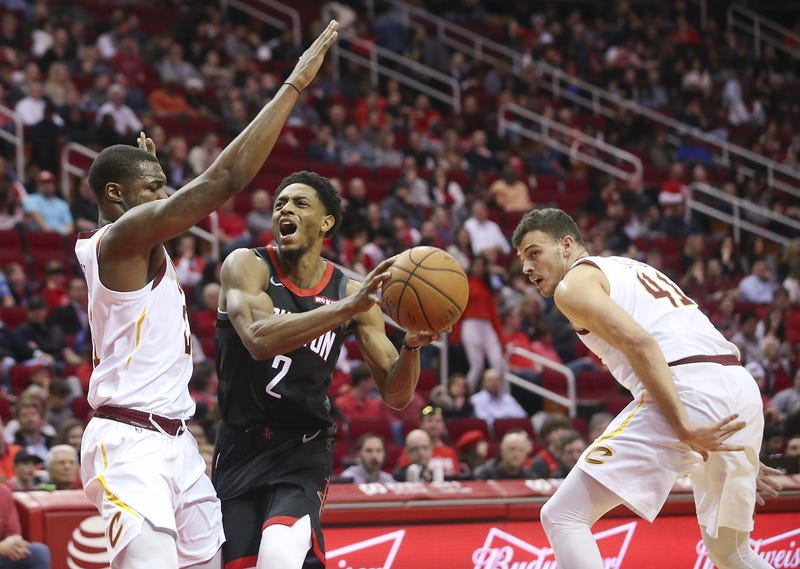 Photo credit Thomas B. Shea-USA TODAY Sports
By 92.3 The Fan

February 7, 2019 02/07/2019 1:21 am
Cleveland, OH (92.3 The Fan) – The Cavaliers are trading Alec Burks and a second-round draft pick to the Kings in a three-way trade according to multiple reports. The Rockets are sending Brandon Knight, Marquese Chriss and a lottery protected 2019 first-round pick to Cleveland. Houston will get Iman Shumpert in return. Newly acquired guards Nik Stauskas and Wade Baldwin are also heading to Houston.

Sources: In Sacramento/Cleveland/Houston three-way deal, Sacramento is trading Iman Shumpert to Houston, Cavs sending Alec Burks and second round pick to Kings, and Brandon Knight and a pick to Cleveland.

Cleveland will send Nik Stauskas and Wade Baldwin to the Rockets in the three-way deal, league source tells ESPN. Cavaliers acquired those two guards in Sunday's trade with Portland that sent Rodney Hood to the Blazers.

The Rockets and Cavaliers were discussing a potential Burks trade for quite some time. Knight, 27, is averaging three points per game in 12 games this season for Houston. The Rockets made this deal to get Knight's contract off the books. He's set to make $15.6 million next season.

Chriss has only played in 16 games for the Rockets, averaging 1.8 points per game. He will be a free agent this summer.

Burks averaged 11.4 points, 5.5 rebounds and 2.9 assists per game since joining the Cavaliers in November. General manager Koby Altman traded Kyle Korver for Burks and two second-round picks. He flipped Burks for a first-round pick. This is the manuevering the Cavs need during their rebuild.

Some may wonder why Cleveland agreed to take on Knight's contract, but they're adding picks in hopes of building for the future. Knight will be one of the many expiring contracts they're expected to have on the books next season.

The Cavaliers will entertain other offers prior to Thursday's 3 p.m. deadline, but they traded Hood and Burks, which were the two players most-likely to be dealt.