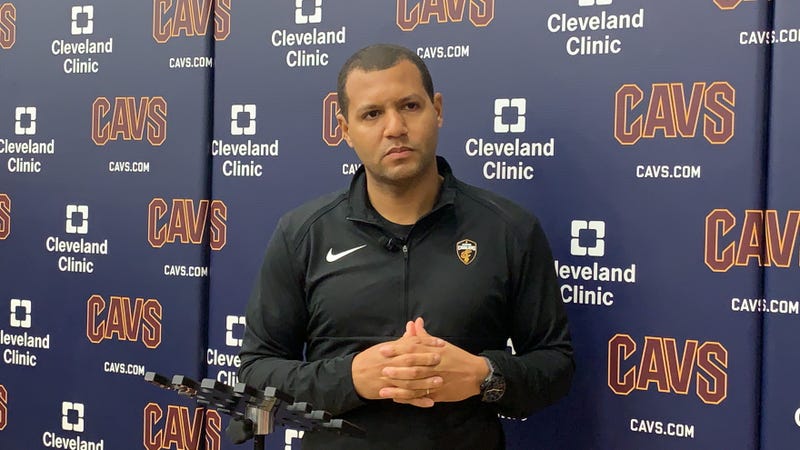 April 12, 2019 04/12/2019 5:54 pm
Independence, OH (92.3 The Fan) – Cavaliers’ general manager Koby Altman stood at the podium with medium surrounding him on Friday afternoon. The organization had officially parted ways with Larry Drew and the search for a new coach was about to begin.

Altman, 36, said all of the right things. He praised Drew for the job he did last season. The Cavaliers are about to start a search that they hope will end with a coach that can guide them back to the playoffs. Altman gets his chance to make his mark on the franchise. There’s pressure, but he's looking for a coach checka all of the boxes.

This will be a comprehensive, thorough search – The Cavaliers aren’t going into this process expecting to hire their next coach by May 1. They don’t have a timetable in place. Their list of candidates is long. Some of them are on playoff teams, while others are in the college ranks.

Don’t rule anything out when it comes to the next Cavs head coach. Altman has an open mind, and will look far in wide in his search for their next coach.

“Who’s going to be the leader for this franchise moving forward and be a cultural driver, be a teacher and be aligned with us?” Altman asked. “I think for us moving into the future in this era of Cavaliers basketball, it’s important that we find the right fit for that. I’m excited to start that process.

“We’re done in April for the first time in four years, so we got a lot of time.”

The organization is hoping to look at multiple coaches that are still in the NBA playoffs. That could mean flying to interview them on the road or delaying the process until specific teams are eliminated.

“We have to be obsessed with the process of getting better.” - #Cavs general manager Koby Altman pic.twitter.com/PJqYEK7MJR

The organization will remain patient during the rebuild – The Cavaliers improved when Kevin Love returned from injury, but that doesn’t mean they think the rebuild will be over anytime soon.

“No, it’s not going to happen overnight,” Altman said. “We have to preach patience and we have to continue to grow this thing and we have to find a leader that’s going to be obsessed with that process of growing.”

This team could threaten for a playoff spot next season if everything goes right. The back end of the Eastern Conference is weak and adding a player like Zion Williamson would put them in the mix. There’s an 86 percent chance that the Cavs don’t get the top pick, which means Altman has to prepare and build this team from the ground up.

The front office is excited about its’ young talent – Player development is probably the number one trait that the Cavs are looking for in their next coach. They want Collin Sexton, Cedi Osman, Larry Nance Jr. and the two first round picks they draft to be set up for success.

Drew was open to playing the young guys, but was also patient and helped them grow. That’s a trait Altman is looking for in his next head coach.

Koby Altman says the #Cavs are looking for a “cultural driver” and he’s excited to find the right fit.“Culture” and “fit” were the words he used the most during the press conference pic.twitter.com/SX3KpqBVkL

Collin Sexton won’t prevent them from drafting Ja Morant – Can the Cavaliers consider a point guard in the draft one year after taking Sexton eighth overall? That’s a question plenty of Cavs fans have asked over the past few weeks. Altman didn’t name any names, but made it clear that they’re open-minded heading into the draft process. He had nothing but praise for Sexton.

“We don’t know how far he’s going to go or what he’s going to become,” Altman said. “His growth has been immense since the rising stars snub. Since then he’s actually been incredible.”

He doesn’t believe that Sexton is a selfish player. Altman expects the assist numbers to go up once the team surrounds him with better shooting.

“Within that, can he play with several of those draft picks? I think absolutely,” Altman said with a smile.

J.R. Smith will be traded this offseason – It isn’t shocking, but the Cavaliers are going to deal Smith at some point this offseason. Altman revealed that he got a call about the veteran shooting guard on Thursday.

“From now until the end of the draft we actually have a trade chip in JR Smith, and his contract,” Altman said. “We can take on some money that other teams are trying to get some cap relief from. We are actually the only team in the NBA that can provide guaranteed cap relief from teams or salary relief until July 1. We can guarantee that right now and we actually had a phone call yesterday on that trade chip, so, we’re going to keep on being aggressive adding those assets because we do eventually want to consolidate and be really good at some point. And so we’re going to keep adding those assets."

Any team that is looking to clear cap space will likely consider dealing for Smith. Only $3.9 million of his salary is guaranteed for next season. How much money are the Cavaliers willing to absorb to obtain a draft pick? That’s the question Dan Gilbert will have to answer prior to a deal getting done.

The Cavaliers feel better about where they are now than they did in 2011. LeBron James had left the summer prior and they didn't have any direction. Altman is hopeful that finding the right coach will establish a culture that gets them back into contention.