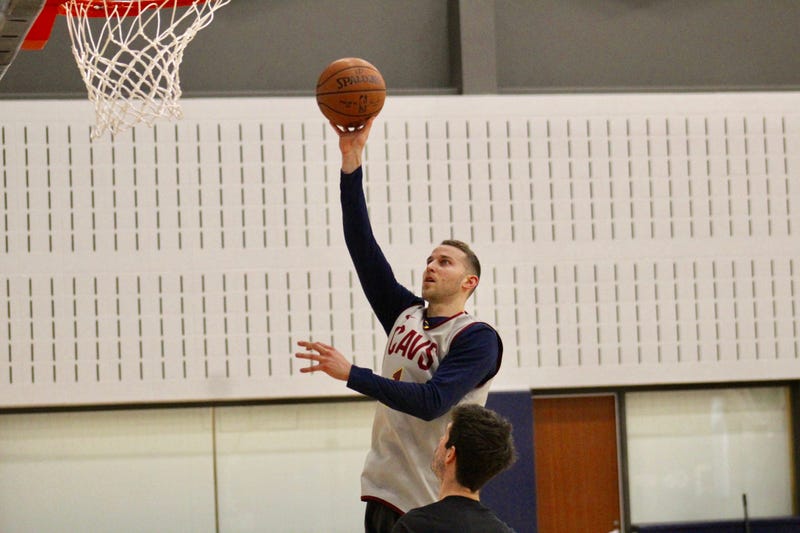 Following a whirlwind week that saw Stauskas move 4 times on the NBA's transaction wire, the Cavaliers signed him for the remainder of the season Monday.

“What’s crazy is I haven’t left Cleveland,” Stauskas said Monday morning following the team’s shootaround in preparation for their game against the New York Knicks Monday night. “I’ve been here all week and I’m glad it all worked out.”

It should help Stauskas settle in quickly.

“I’m used to being in new environments with new coaches, new players,” Stauskas said. “For me it doesn’t take long. I give it about a week or so and I’ll feel at home.”

The Cavs acquired Stauskas along with Wade Baldwin IV and the Trail Blazers’ 2021 and 2023 second-round picks from Portland last week for Rodney Hood.

Two days later he was sent to Houston as part of a three-team trade with the Rockets and Sacramento that saw the Cavs send Alec Burks to the Kings and netted Cleveland Houston’s 2019 first- and 2022 second-round draft picks.

The Rockets traded Stauskas before the deadline to Indiana and the Pacers ultimately waived him allowing the Cavs to swoop in a re-sign him.

Part of the reason Stauskas is so excited to return to the Cavs is he grew up a LeBron James and Cavs fan and would make trips to Cleveland to watch games – mostly around the holidays when he was out of high school on break.

“My Christmas present would be a trip to Cleveland,” Stauskas said. “I grew up in Toronto. Not many people take trips to Cleveland, I know, but I would take a trip and watch LeBron play, every December.”

“With the way the NBA is every team can use 3-point shooting, something I bring to the table,” Stauskas said. “Whether it’s scoring, playmaking, defending, rebounding, I look at myself as a complete basketball player, not just a shooter.”

Knick nacks – The Cavs have won 13 of their last 15 games against the Knicks.

Cleveland has knocked down at least 10 field goals from long distance in 29 games and shot .400 or better from beyond the arc in 14 outings this season.

Milestone watch – Kevin Love is 1 block away from 300 for his career while Channing Frye is 7 rebounds shy of 4,000.
Home cookin’ – The Cavs will play 7 of their next 8 at home starting with Monday night’s game with the Knicks before wrapping up the unofficial first half of the season Wednesday against the Brooklyn Nets.

Following the All-Star break, Cleveland will host the Phoenix Suns on Feb. 21 to begin the stretch run.