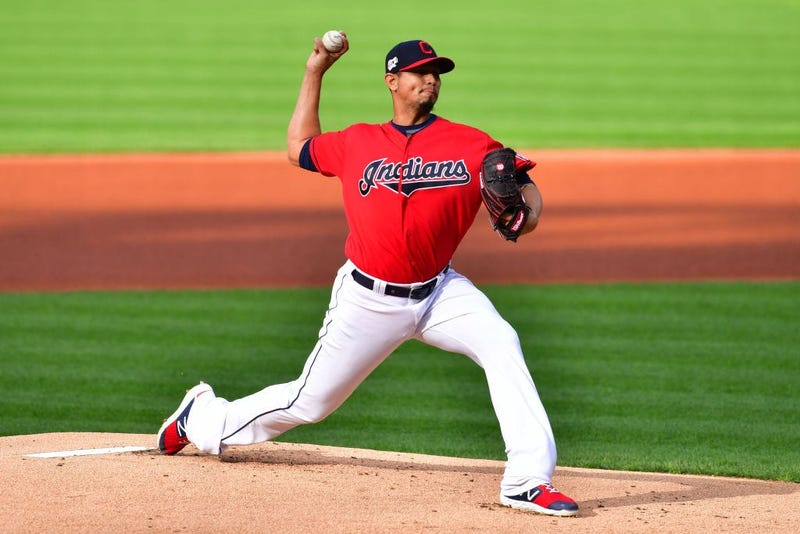 Photo credit Photo by Jason Miller/Getty Images
By 92.3 The Fan

“He kind of bruised it,” manager Terry Francona said. “He fell on it, but he initially felt in in the back (of the knee) so that’s why the medical people felt like ‘let’s just rule everything out,’ and again hopefully it’s just being precautionary, but we do want to get him checked out.”

Carrasco stayed in the game to get the final out of the inning, but didn’t return. He underwent an MRI after the game for precautionary reasons. The Indians desperately need the results to come back negative. A serious knee injury for Carrasco would be a devastating blow to the organization.

The starting rotation is the Indians' one clear-cut advantage over their opponent. They have the best rotation in baseball when they're at full strength. They’ve already lost Mike Clevinger for multiple months. Losing Carrasco would turn their strength into a question mark.

Would a rotation of Corey Kluber, Trevor Bauer, Shane Bieber and two unknowns be enough with this roster? The answer is no.

They aren’t built to withstand significant injuries to their top players. The Indians have an average (at best) bullpen. Their lineup only produced one run on Tuesday against the Marlins. This isn’t even meant to be critical, it’s just a reality the Indians face. They have a flawed roster that needs its’ rotation to shoulder a lot of the burden.

Of course they can survive with Jefry Rodriguez and Adam Plutko starting a few games every once in a while, but it’s hard to envision them winning anything of substance with two of their starting pitchers missing significant time.

Carrasco may have just suffered a bruised knee and be fine for his next start. The Indians need that to be the case. Unfortunately for them, they've been on the receiving end of bad news over the past few months.

Francisco Lindor missed all of spring training and the start of the season with calf and ankle injuries. Jason Kipnis dealt with a calf injury. Clevinger is out for months with a back strain. Other pieces like Bradley Zimmer and Danny Salazar are still working their way back in hopes of contributing later this season.

Some fans have openly wondered if this team is snakebitten with bad luck this season? If they get bad news about Carrasco, it'll be hard to disagree with the fans who feel that way.

If 40 percent of the Indians’ biggest strength misses significant time, is it still strong?

Who starts if Carrasco is out? – Salazar could be an option later in the season, but he isn’t close to returning. Plutko is still dealing with a forearm injury and hasn’t pitched since spring training. Either player could be an answer down the line, especially Plutko, who’s expected to return sooner than Salazar.

In the short-term, Asher Wojciechowski would be a realistic option. The 30-year-old has started three games for Triple-A Columbus this season, posting a 1.06 ERA with 20 strikeouts in 17 innings. He’s started 11 career games in the big leagues with Houston and Cincinnati. If Carrasco only misses a start or two, Wojciechowski will likely get consideration. Michael Peoples is another option if the Indians want to promote a starter from Columbus.

What about Dallas Keuchel? – You probably thought it and if you didn’t your friend did. Dallas Keuchel is still a free agent. He will likely sign a one-year deal and he's hoping to latch on with a contender.

There are plenty of questions about a potential deal with Keuchel. How much will he cost? How long will it take him to get ready to pitch? He missed all of spring training and hasn’t thrown in a game since the playoffs last season. It could take up to a month, including multiple rehab starts in Triple-A to get him ready to go. It would be a roll of the dice by the Indians.

Keuchel is a good starting pitcher. He was looking for ‘great starting pitcher’ money this offseason and that’s why he’s still a free agent. If Carrasco was out for most or all of the season with a knee injury, then looking at Keuchel makes sense. Indians’ ownership would obviously have to sign-off on a potential deal and that could be the speed bump that prevents this from happening, but it would be a nice pairing.

Gio Gonzalez is another option if they opted to go the free agent route. The two-time All-Star was released by the Yankees on Monday.

Hopefully it’s something the Indians don’t have to worry about. They got the results of the MRI on Tuesday night and we should have news on Wednesday morning. The results will have a huge impact on the 2019 Indians.