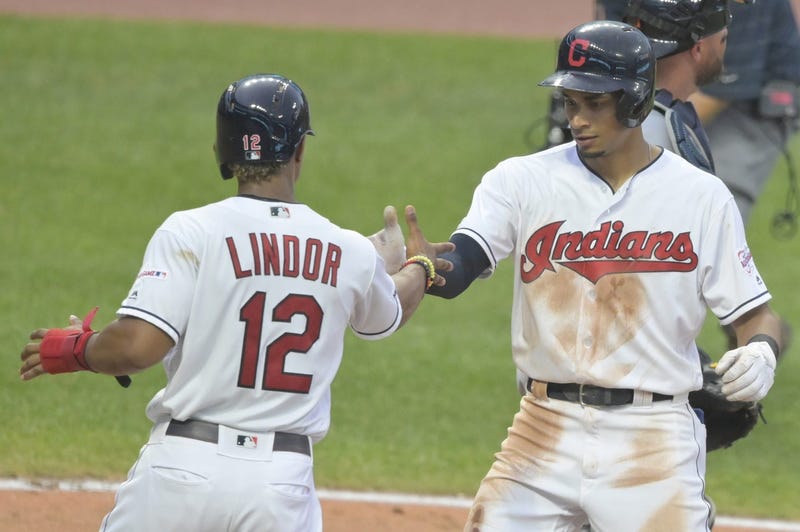 Cleveland scored five runs in the second inning and two more in the third, which put them in position for their third win in a row.

The Indians had five hits in the second inning, including a two-run double from Francisco Lindor and a two-run homer from Oscar Mercado. Mercado has three home runs in his last two games.

Oscar caps off a 5 run second inning with an oppo taco on Tuesday!#RallyTogether pic.twitter.com/8jjjvp9e3S

Jordan Luplow and Jose Ramirez both doubled to start the third inning to increase the lead to 6-0. Ramirez scored later in the inning on an error by pitcher Ryan Carpenter. Ramirez has a hit in eight straight games and has doubled in three straight contents.

The game was delayed for two hours and seven minutes due to rain. Play resumed at 10:14 p.m.

Zach Plesac didn’t allow a hit in three innings of work. It was his ninth start of the season for the Indians. The 24-year-old didn’t return after the rain delay. His ERA fell to 3.56 this season. Plesac leads the majors with five pick-offs, after catching Victor Reyes sleeping at first base in the first inning.

“He’s got the quickest feet I’ve ever seen,” manager Terry Francona said. His uncle {Dan} told me that, but again, a lot of uncles [talk up their nephews>, you know. He’s right.”

The Indians have won three straight games and are 53-40 on the season. The Twins lost to the Mets 3-2, which means the Tribe pulls within five games of Minnesota in the American League Central Division. It’s the closest they’ve been since May 19 when Cleveland trailed by 4½ games.

Rakin’ Naquin – Tyler Naquin continues to make the most of his opportunities when he’s in the lineup. He finished 2-for-3 with a home run. Naquin has two hits in each of the last four games and an extra base hit in three straight contests.

Health Check – Danny Salazar made his second rehab start with Double-A Akron. He allowed one run and three hits in three innings with two walks and four strikeouts. He threw 58 pitches (38 strikes). The Indians haven’t decided if Salazar will be a starter or a reliever. They’re waiting until he’s closer to returning to action.

Corey Kluber will throw a bullpen session on Wednesday afternoon for the first time since breaking his forearm in May. The 33-year-old has long tossed and played catch, but he hasn’t thrown off the mound. Kluber will start with 20 fastballs and see how his arm reacts.
Up Next – The Indians continue their series with the Tigers on Wednesday night. Mike Clevinger will get the start for the Tribe. He enters with a 2-2 record and a 3.99 ERA in six starts. Spencer Turnbull will get the ball for Detroit. He’s 3-8 on the year with a 3.59 ERA.