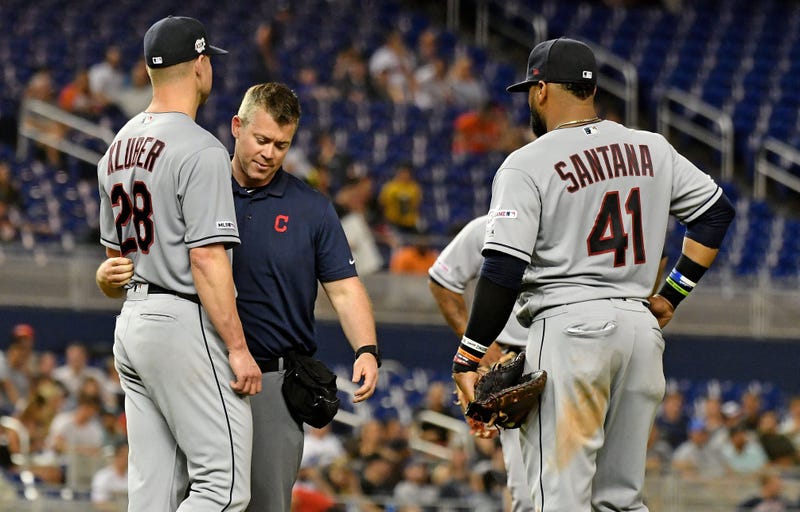 Brian Anderson's line drive hit Kluber in his right arm. The Indians’ ace will be re-evaluated in Cleveland on Thursday.

An injury of this magnitude always leaves more questions than answers. How much time will Kluber miss? How will the Indians replace him? Can this team survive with two of their starters – Mike Clevinger and Kluber – missing significant time due to injury?

There’s one question that stands out more than the others: Is this the beginning of the end for Kluber?

He got off to a bad start this season. Kluber entered Wednesday with a 5.81 ERA, allowing 37 hits and 23 runs in 31 innings. Opposing hitters posted a .287 batting average against him.

Kluber had already become a question mark in the Indians’ rotation. He was their fourth-best starter in the month of April. The Indians were hoping he would get past the struggles and resemble the pitcher he’s been for the past five years. Kluber had shown flashes of being that guy, but the consistency wasn’t there at the start of the season.

It was becoming harder and harder to envision him getting back to an elite level. It looked like Kluber was losing his fight with father time.

Most starting pitchers would’ve wilted long ago with the workload Kluber has shouldered. He pitched 1,091 regular season innings from 2014-2018. Kluber’s thrown at least 203.2 innings per season over that span.

Now the two-time Cy Young Award winner has an even bigger fight in front of him. Can he recover from a broken forearm and pitch at a high level or will this injury be a marker for his decline?

It rarely ends well for professional athletes. Fans and media have spent the past four months discussing LeBron James’ potential decline. The former Cavaliers’ star played at a high level last season, but everyone questioned his mortality after he suffered a groin injury in December.

Greatness only lasts so long. Pitchers like Roy Halladay and Cliff Lee saw a significant drop off in their performance in their mid-30’s.

Kluber turned 33 on April 10. When you look at age, his struggles to start the season and the issues that could stem from a broken right forearm – the same arm he pitches with, it’s easy to see why this could be the beginning of the end.

Kluber has dealt with his fair share of injuries. This might be the toughest one to overcome.

“I worry about the players,” manager Terry Francona said on Wednesday night. “You always figure that we’ll figure something out as a team, but you worry about the guys because you care about them. You saw it, it looked ugly and you just worry about guys.”

Tito should be worried about his guy. Kluber is great, but Wednesday night’s fluke injury could be what everyone remembers a decade from now when they talk about the fall of the three-time All-Star.

If anyone can overcome something of this magnitude, it’s Kluber, who works as hard as anyone in the sport. Unfortunately his climb back to greatness is going to be much harder than anyone could’ve imagined.