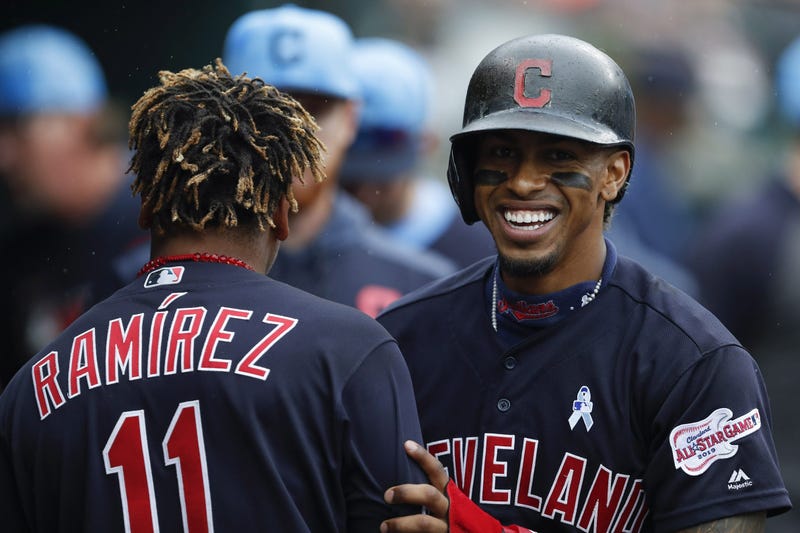 Kluber attended Coppell High School in Texas, which is less than a 30 minute drive from where the Rangers play — Globe Life Park in Arlington.

The 3-time All-Star was hoping to bounce back after an injury filled 2019 campaign. Kluber only made seven starts, posting a 5.80 ERA. His last big league appearance was on May 1.

The Indians received outfielder Delino DeShields and right-hander Emmanuel Clase. It’s an underwhelming haul for the man that carried the Indians to Game 7 of the World Series in 2016.

Kluber was the first two-time Cy Young Award winner in team history. He was under Indians’ control through 2021. Why would they trade the former ace for a bench player in DeShields and a 21-year-old reliever? DeShields might not make the team. Is he better than Greg Allen, Jordan Luplow or Bradley Zimmer?

Clase is highly thought of across the league. Both scouts and teams love him.

The right-hander throws a cutter that tops out at 102 mph and regularly hits 99-100. Clase went from Double-A to the big leagues last season, allowing just six earned runs in 23⅓ innings. The flamethrower finished with 21 strikeouts and issued just six walks over that span.

Clase will instantly give the Indians’ bullpen a boost. He threw 345 pitches in the big leagues last season — 67 (19 percent) were clocked at 100 mph or faster.

They desperately needed another hard throwing reliever to compliment closer Brad Hand. Clase joins James Karinchak as young right-handers that could stabilize the Indians’ bullpen in the future.

Despite the addition, there’s no way the organization can part with Kluber ­— who is one of the best pitchers in team history — for a young reliever and a fifth outfielder.

The Indians have to take the $17.5 million salary that they were going to pay Kluber and put it toward the 2020 team. That money can help fill out a roster that still needs a starting infielder and could use upgrades in the bullpen and the outfield.

The Indians’ 2020 payroll will be well under the $100 million mark following this trade. That number includes MLB Trade Rumors' arbitration projections. The payroll was cut from $134.9 million in 2018 to $119.6 million last season. The organization said the 2019 budget was more sustainable moving forward. That means the Indians should have room to add to their roster in free agency or via trade.

“We will have more resources available to reinvest in our team and that’s our expectation here as we head into the rest of the winter,” Antonetti said. “We will continue to look for avenues to improve are major league team both in trade and in free agency.”

The return for Kluber is underwhelming on the surface, but if it means re-signing Yasiel Puig, for example — to a 2-year, $30 million contract, then it could be worth it.

Todd Frazier, Maikel Franco, Cesar Hernandez, Eric Sogard, Corey Dickerson and Kole Calhoun could all be options for the Tribe if they are willing to open their checkbook and spend in free agency.

This trade has to set the table for the rest of the offseason. The Indians need to use the assets they’ve saved to make the team better in 2020.

Francisco Lindor will likely be in Cleveland next season, unless another team overwhelms the Indians with an offer that is too good to refuse. They’ve opened up salary after the Kluber trade and don’t need to consider dealing the four-time All-Star, who is under team control through 2021.

“I have every expectation that Francisco Lindor will be our starting shortstop on opening day next year,” Antonetti said.

If they're keeping Lindor — one of the best players in baseball — they owe it to themselves to build a great team around him, even if it's just for one or two seasons.

The Indians have put themselves in position to make the moves necessary to become a legitimate contender in the American League.

Their starting pitching is still elite. They have proven sluggers like Carlos Santana, José Ramírez, Lindor and Franmil Reyes in their lineup. Adding an infielder that can play second or third base is going to be vital this offseason. Longtime second baseman Jason Kipnis is a free agent, which means the Indians could sign someone to replace him or move Ramírez to second and add a third baseman.

Re-signing Puig or bringing in another reliable outfielder has to be considered too. Oscar Mercado is part of the present and future, but the Indians’ lineup was different with a threat like Puig in the cleanup spot.

This organization isn’t rebuilding. They want to win now, while preserving their long-term future.

Trading Kluber is painful. Sending a former ace to Texas for a promising reliever and a middle of the road outfielder isn’t sexy. It isn’t going to win fans over and it certainly isn’t going to be enough to beat the Twins in the AL Central.

If this trade allows the Tribe to be more aggressive in free agency, then it could be worth it.

It’s up to the Indians to make the right moves this offseason to not only compete for a division title, but to vault themselves back into contention in the American League.