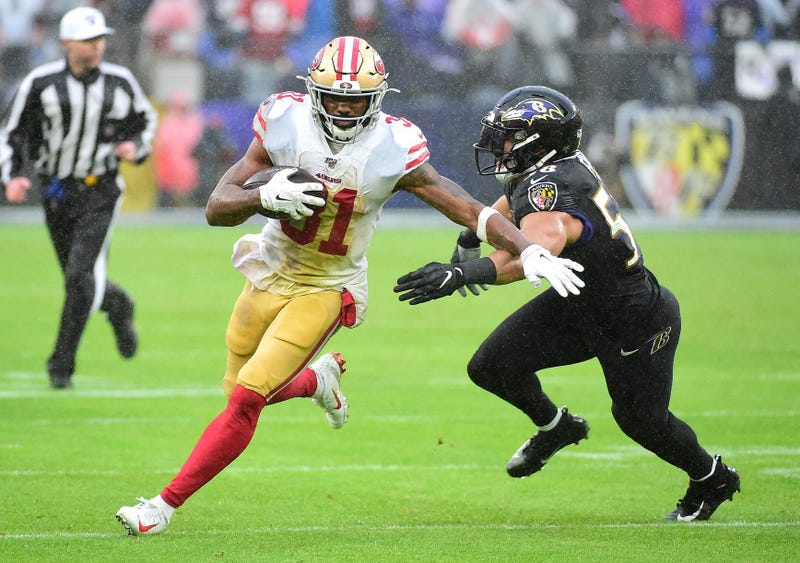 December 3, 2019 12/03/2019 2:31 am
CLEVELAND, OH – The fantasy playoffs start in most leagues this week. The trade deadline is long gone, which means the waiver wire is key to upgrading your team. Making the right free agent additions down the stretch could be the difference between winning and losing a fantasy championship.

Here are the players worth adding this week:

Raheem Mostert (14%) – Mostert ran for 146 yard and a touchdown on a team-high 19 carries on Sunday against the Ravens. Matt Breida was out with an ankle injury, but Mostert outplayed Tevin Coleman and could be a factor in the final month of the season. He’s worth adding in all 12-team leagues.
Alexander Mattison (30%) – Mattison would become an instant RB1 if Dalvin Cook (shoulder) were to miss any time. He's a tough runner who already has a role in the Vikings' offense. He finished with 11 PPR points on Monday night after Cook left with the shoulder injury. Mattison should be owned in all leagues.
Jack Doyle (58%) – Doyle had six receptions on 11 targets and one touchdown against the Titans. With Eric Ebron out for the season, Doyle is on the TE1 radar for the remainder of the year. He could be a difference maker if he’s available in your league.
Mike Gesicki (19%) – Gesicki had five receptions for 79 yards and a touchdown. He has at least 11 PPR points in three of his last five games. He’s a streamable TE2 moving forward.
Zach Pascal (17%) – Pascal had seven receptions on 10 targets against the Titans. He’ll remain a focal point of the Colts’ offense as long as T.Y. Hilton and Parris Johnson are out due to injury. Pascal is worth a speculative add in 12-team leagues.
Derrius Guice (50%) – Guice has shown his potential over the past few weeks. He finished with 129 yards rushing and two touchdowns on just 10 attempts. Guice is an RB3 moving forward and should be owned in all leagues.
Robby Anderson (58%) – Anderson has 11 receptions for 187 yards and a touchdown in his last two games. He has a great matchup in Week 14 against the Dolphins. In the past he might’ve been a risky start, but he’s a WR3 with upside and is worth adding if you’re looking for a plug-and-play wide receiver.
James Washington (23%) – Washington has 90 or more yards in three of his last four games. He has the 10th most PPR points among wide receivers over that span. He's a WR3 with plenty of upside going into the final month of the season. The return of JuJu Smith-Schuster could make things easier on Washington, who has done enough to earn the trust of quarterback Devlin Hodges.
John Ross (7%) – Ross is expected to return this week after suffering a clavicle injury in Week 4. He had the 15th most PPR points among wide receivers through the first four weeks of the season. He was also 11th in receiving yards and ninth in receiving touchdowns over that span. Ross is worth adding if you’re looking for a boost in the final month of the season. He has WR2 potential with Andy Dalton under center.
Other players worth watching: