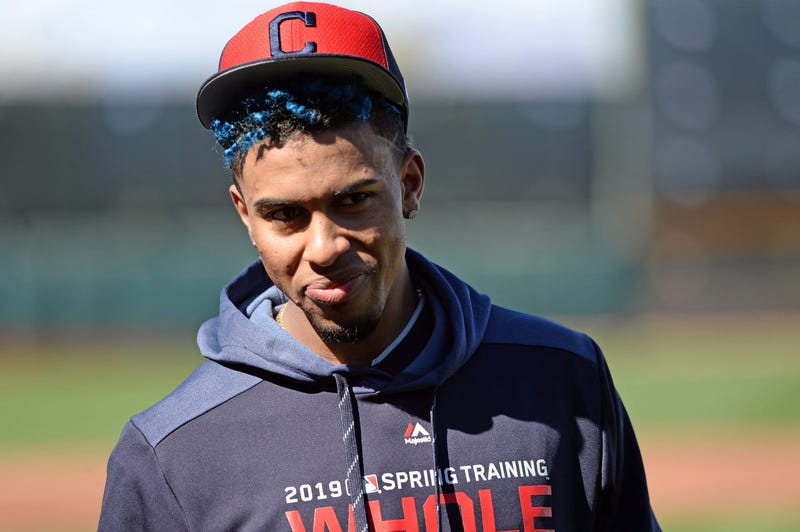 February 18, 2019 02/18/2019 10:56 pm
Cleveland, OH (92.3 The Fan) – Francisco Lindor's future with the Indians is something fans and media have thought about for quite some time. The three-time All-Star is under team control through the 2021 season. He avoided arbitration this offseason, agreeing to a $10.55 million deal for 2019.
"When it comes to long-term deals, I love the city of Cleveland," Lindor said. "I love everything about Cleveland. I love messing with you guys. We'll see. We'll see what happens. At the end of the day, I'm playing the game to win. This is a good place where I can win, so we'll see. If the Indians come up with the right numbers and at some point it happens – which, I'm not even thinking about it – we'll see."

Here’s #Indians star shortstop Francisco Lindor on the possibility of signing a long term deal with the Tribe pic.twitter.com/MmvHKHpBHH

Lindor, 25, has been extremely durable throughout his career. He's currently dealing with a strained calf, but he's played in at least 158 regular season games since becoming a full-time starter in 2016. There's plenty of pessimism among fans when it comes to an extension. People question ownership, their desire to win and the willingness to spend money, among other things.

Plenty of people want the Indians to sign Lindor to an extension now. Of course it would be a wise move to buy his last two years of arbitration and sign him for the rest of his prime. Unfortunately for Cleveland, Lindor would be a fool to sign anytime soon. He will reach free agency at 28-years-old. He’s been durable and should continue to post big numbers. Why sign now, when you could wait, secure as much, if not more money long-term and maintain future flexibility?

The Indians would have to blow Lindor away with an offer to get him to agree to a deal now. He’s wise to wait, play it out and see what his options are after the 2021 season.

Lindor probably wouldn’t sign an extension with the Yankees, Red Sox or any other team at this point. His salary will continue to rise over the next two seasons. Then, he can cash in on a long-term deal that could last 8-10 more seasons.

Can the Indians keep him?

There’s also a chance they could extend him 2021. Troy Tulowitzki made $20 million per season from 2016-2018. That’s the highest yearly salary for a starting shortstop over the past decade. Lindor will want the numbers to be right, but Cleveland can certainly be in the mix to sign him.

Manny Machado’s contract will likely impact those numbers, but the Indians have plenty of money coming off of the books by 2022. Corey Kluber, Carlos Santana and Trevor Bauer could all be playing elsewhere. Carlos Carrasco will be under contract for one more season. The front office is positioning itself to get younger by the time Lindor becomes a free agent.

Some believe this is a done deal – ‘Frankie’ will end up in New York or another big market. Why is that the consensus? Is it because LeBron James left for Miami and then Los Angeles? Does it boil down to Indians’ ownership? Does the national perception of the city impact its’ stars? There are plenty of people that assume a small market team like Cleveland can’t pay Lindor $25-30 million per season. Why can’t they?

Do you give the #Indians a realistic shot at keeping Francisco Lindor long-term? Note: He’s set to be a free agent after the 2021 season.

The Indians are spending $27 million combined on Jason Kipnis – $16.5 million and Lindor – $10.55 million this season. Let’s assume Kluber and Bauer are off the books and the overall roster is younger and cheaper. Why would a well-run organization let Lindor walk if he continues to play at this level? Sure, they could be outbid if a team offers him a $400 million contract. Is anyone expecting that to happen, given how free agency has treated Machado and Bryce Harper this offseason?

It’s far from guaranteed that Lindor will remain in Cleveland after the 2021 season, but it’s silly to think his departure is a foregone conclusion.