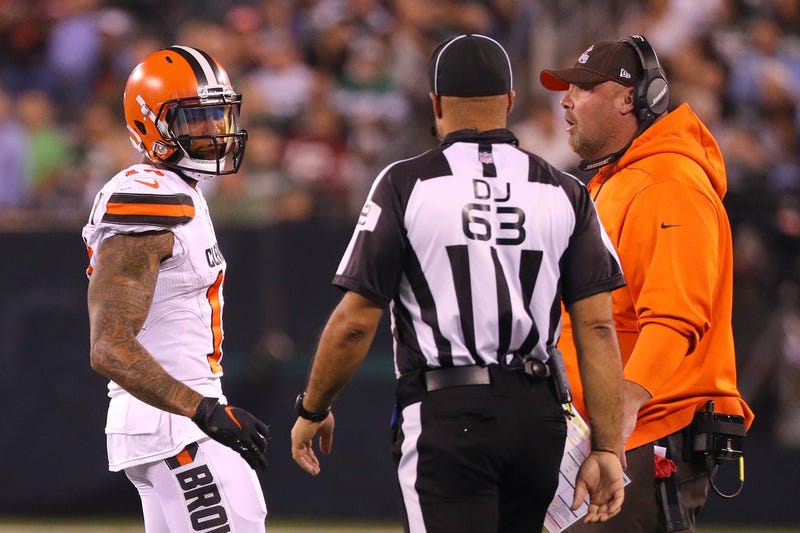 December 15, 2019 12/15/2019 6:09 pm
CLEVELAND, Ohio (92.3 The Fan) – The Browns are in Arizona Sunday where they’ll play at 4:05 eastern, and as is customary in December, the team made plenty of news Sunday.
Ian Rapoport of NFL Network wrote Sunday that the Browns do not plan to make a coaching change at the end of the season “barring a horrific collapse or circumstance to end the season.”

Rapoport’s report matches what we’ve been hearing and have said regarding Kitchens’ future in Cleveland.

Ownership and management understand Kitchens hasn’t been perfect in his rookie season, but they hired him with the intent that he would be their long-term coach despite a disappointing 2-6 start to the season.

The Browns enter Sunday’s game having won four of five to move within the periphery of the AFC playoff picture, although their chances of securing the second AFC wild card remain slim.

Jay Glazer of Fox Sports doubled down on his report from a week ago in which he reported that receiver Odell Beckham Jr. wants out of Cleveland.

Last Sunday, Glazer reported that Beckham had been telling opponents this year to “come get me,” a report corroborated by Charles Robinson of Yahoo Sports Monday, who wrote that Beckham feels “lost” with the Browns.

On Thursday, receiver Jarvis Landry said that Beckham, “doesn't want to leave, and he's not trying to leave” prompting this response from Glazer on Fox NFL Sunday.

“Sure, Jarvis, yeah, he wants to stay,” Glazer said. “C’mon, look, I’m not going to go against Jarvis Landry but look, Odell Beckham factually did go tell teams earlier this year ‘Come get me, come get me.’ The bottom line is he’s not happy there.

“They’re not using him the right way, but it’s not up to Odell Beckham whether or not he remains in Cleveland. It’s more so up to the Browns. The Browns need to find a way to figure out how to better use Odell Beckham Jr.’s talents so he doesn’t want out of Cleveland.”

Jason LaCanfora of CBS Sports wrote that although Beckham is unhappy, he won't request a trade and is interested to see what changes are made for the 2020 season.