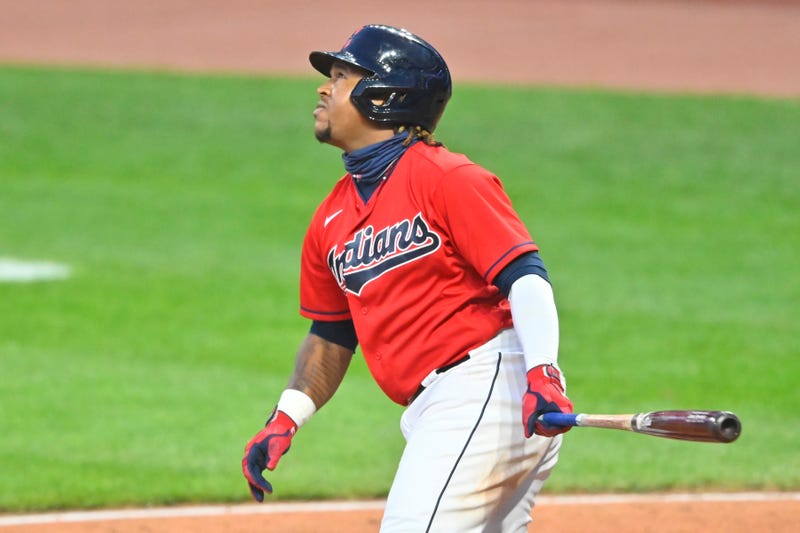 Jose Ramirez homered twice – from each side of the plate – and a 3-0 affair was quickly turned into a laugher when the Indians put up 10 in the seventh to cruise to a 13-0 win Thursday night at Progressive Field, Cleveland’s third win in a row, to retain the Ohio Cup for the sixth consecutive year from their in-state rivals, the Reds.

“That’s how you get out of slumps,” acting manager Sandy Alomar said.

The Indians scored more runs in the seventh inning than they had in the previous seven games, and they didn’t have to do much hitting either.

Ramirez, who went 3-5, drove in four and scored four times in the win, turned around a 98-mph fastball from Reds starter Louis Castillo and sent it 416 feet into the right field chairs for a 1-0 lead in the first. He touched Castillo in the fifth for an RBI triple before adding the two-run shot in the seventh.

“I think that was key to get us on the board and take a little tension away from the offense,” Ramirez said through interpreter Agustine Rivero.

The third baseman was named the ‘Frank Robinson Most Outstanding Player Award’ winner for the second time in three years for the series.

“It’s a good reinforcement to get that with the media and the comments that people were saying about the Indians having no hitting,” Ramírez said through Rivero. “So it’s a reminder that we’re here, that we can produce and we’re going to be producing for the rest of the season.”

Indians starter Carlos Carrasco threw six scoreless innings in which he allowed one hit. He struck out eight, walked four and threw a pair of wild pitches to lower his ERA to 2.50 and improve to 2-1 on the young season.

Cincinnati was held scoreless for the final 23 innings of the four game home-and-home series.

“There is a little competition between our pitchers, but we never talk about it,” Carrasco said. “It’s a lot of fun seeing the other guys throw zeroes after zeroes and pitching great. You get emotional, man, seeing your teammates doing their thing.”

Castillo struck out nine Indians and had Cleveland’s hitters off balance for the first four innings, but he ran out of gas in the fifth inning and the roof began to cave in for Cincinnati.

Cesar Hernandez walked with two outs before Ramirez ripped a triple that kicked off the side wall away from right fielder Nick Castellanos allowing Hernandez to score all the way from first. Francisco Lindor followed by slapping a single into right scoring Ramirez and making it a 3-0 ballgame.

Carrasco walked a pair and threw two wild pitches in the top of the sixth, but he got DH Jesse Winker looking at a called third strike to end the threat. Reds manager David Bell didn’t agree, and he gave plate umpire Jerry Meals a piece of his mind with some colorful vocabulary mixed in before being asked to leave the ballpark.

Then came the avalanche of runs in the seventh that saw the Indians send 14 to the plate. Oscar Mercado was the lone Indian not to reach base or score a run in the inning.

Reds reliever Jose De Leon walked in three runs with the bases loaded in that seventh for Cincinnati before mercifully being pulled. He was charged with eight earned runs despite allowing just four hits to go with four walks.

Hernandez cleared the bases with a three-run double to make it an 11-0 game before Ramirez came to the plate for the second time in the inning and clubbed a ball to the empty bleachers to provide the final margin.