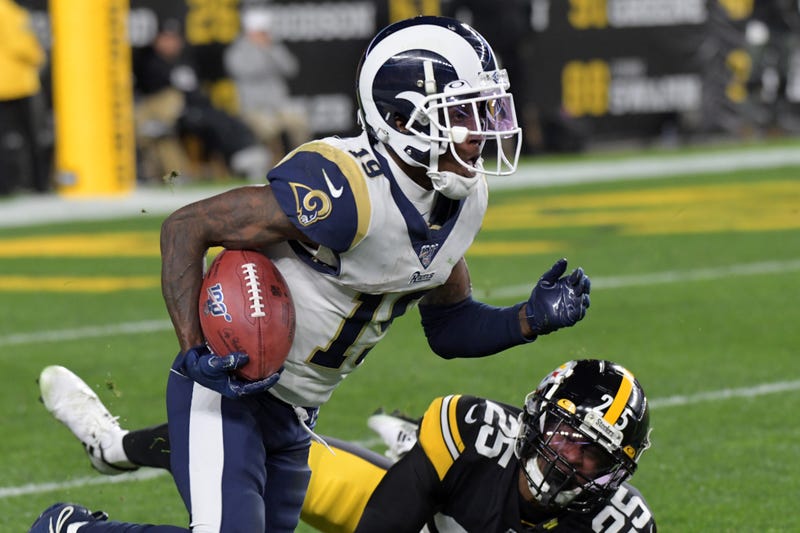 Natson agreed to a one-year deal worth $1 million last week.

Monday afternoon he joined Adam “The Bull” and Dustin Fox on 92.3 The Fan where he discussed his role in Cleveland, among other things.

LISTEN: JoJo Natson: You can't hit what you can't catch

“I know my role and I try and specialize in it. I know kick return and punt return, if I specialize in so I take that role very seriously and I just go out there and work hard and try and make plays for my team.”

No one is happier to have Natson in brown and orange than special teams coordinator Mike Priefer, who praised the speedy returner last September leading up to their game against the Rams on Sunday night football.

“He is terrifying,” Priefer said on Sept. 19. “He is really quick. He is the fastest guy on the field. He is fearless for a little guy. When I was in Minnesota, we played at the Rams last year on a Thursday night and he was injured prior to the Sunday night. I do not like anybody getting hurt, but I am glad we did not have to face him.

“He poses a big-time threat because you can’t be out of control at the point of attack or you are going to miss him. I told our guys in the meeting today that he can make you miss in a phone booth. He is that quick. We have to do a great job of surrounding him, throttling down, being under control and making a play.”

Natson averaged 9.5 yards on punt returns and 20.9 on kickoff returns in Los Angeles the last two years, but he is willing to expand his game should the opportunity present itself.

“My receiving ability is there as well, but like I say, man, I’m going there to work hard and I’m going to let the chips fall where they may,” Natson said. “I’m going to go out there and work hard and if I find a niche at receiver, that’ll be a plus as well.”

He’ll get to learn from two of the best receivers in the business – Odell Beckham Jr. and Jarvis Landry.

“I’m ready to get in there and get up under their wings and learn from them, anything and anyway possible,” Natson said. “It’s going to be amazing to share the wide receiver room with those two guys, just seeing how they go about their business in the NFL. I’m excited to learn from those guys.”

Natson isn’t very big. He’s listed at 5-foot-7 and less than 160 pounds. While many would say that’s a disadvantage in the NFL, Natson sees it as an advantage.

His collegiate career started at Florida before he moved to Utah State and then to Akron.

An undrafted free agent signed by the Colts, he was released and signed with the Jets his rookie season in 2017 before spending the last two years with the Rams.

“I’ve definitely been all over the place, but it feels good to be back in northeast Ohio,” Natson said.

With the Rams under head coach Sean McVay, Natson got to play in Super Bowl LIII, a 13-3 loss to the Patriots.

“My two years with the Rams was amazing,” Natson said. “That Super Bowl run was amazing. To this day, it still doesn’t feel real. I wish we would’ve got the win, but the experience alone was a blessing and I’m forever thankful for the opportunity that the Rans gave me.”

Natson is staying in California until the coronavirus concerns dissipate but he’s doing what he can to be ready once the all clear to practice in Cleveland and across the league comes down.

“It’s really tough right now, honestly,” Natson said. “A lot of the gyms are closing or health reasons, but for me, I know a lot of my friends, we just try and grind it out on our own as much as possible.

“We’re making the best out of it to stay in shape and hopefully all this stuff passes over so we can get back to our regular schedule.”