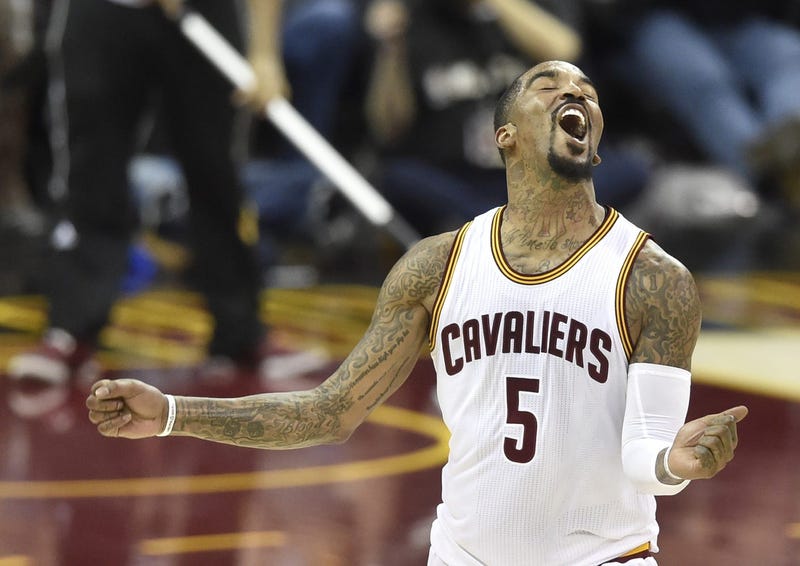 Smith has become a fan favorite in Cleveland. Some believe his jersey should be retired. Others think of him as “shirtless J.R.” Every Cavs fan will remember his hot shooting, personality and everything in between.

Not many could’ve imagined Smith would grab the hearts of so many fans when the Cavaliers traded for him on January 5, 2015. The Knicks moved on from Smith and Iman Shumpert to free up cap space in hopes of signing a top free agent. The Cavaliers were contenders, hoping to bolster its’ defense. A defender like Shumpert was exactly what they were looking to acquire. Smith wasn’t the player he once was, but Cleveland thought LeBron James could get the most out of him.

Shumpert was the key piece in the trade. He was younger and a better defender, but Smith and Cleveland clicked from the beginning. He shot 39 percent from three-point range in 2015 following the trade. Smith quickly became a big part of the offense. He fit in well with Kyrie Irving and James.

Smith was different. He said what was on his mind and was always authentic. Fans gravitated toward that.

Smith knew his role as a spot up shooter and took over when necessary. He played in 79 playoff games for Cleveland and started every postseason game but one from 2016-2018.

He was one of their most consistent three-point shooters in the playoffs during the 2016 (43 percent) and 2017 (50 percent) NBA Finals runs. One of Smith’s best moments happened during 2016 NBA Finals in Game 7 against the Golden State Warriors. The Cavaliers were trailing 49-42 at halftime, on the road at Oracle Arena and on the ropes. They had won two straight games to force a Game 7, but it looked like the Cavs were going to come up short. The Warriors were known for their third quarter outbursts.

Instead of losing more ground, Smith led the Cavaliers out of the break with eight points in the first 2:26 of the third quarter. Irving tied it with a layup 44 seconds later, which set the tone for the rest of the game. Without Smith’s eight points to start the half, the Cavaliers probably wouldn’t have escaped with the Larry O’Brien Trophy.

It wasn’t all sunshine for Smith in Cleveland. He had his downs, including Game 1 of the 2018 Finals against the Warriors. Smith scored 10 points in 39 minutes, shooting just 30 percent from the field. His struggles scoring wasn’t the problem, his lack of awareness is what cost the Cavs. Smith rebounded a missed George Hill free throw with four seconds left and the game tied 107-107.

Instead of attempting a layup or passing to James for an open three, he dribbled to the top of the key and let time run out. Smith thought Cleveland had the lead and it ending up costing the Cavs in Game 1. The Warriors went on to win 124-114 in overtime. Smith’s gaffe is a part of his legacy in Cleveland, even if fans want to forget his blunder.

Overall, Smith outperformed everyone’s expectations when the Cavs traded for him in 2015. The Knicks dumped him in hopes of landing a big time free agent. Cleveland wiped him off, cleaned him up and helped him shine brighter than anyone could've imagined.

“I love to see the smiles, I love the appreciation, the hard work,” Smith said earlier this month. “People don’t realize how much [New] Jersey and Cleveland are so similar; we work off our own sweat. It’s always been our hard work gets us to where we’re at. I think that’s the biggest thing as far as connection between Cleveland and myself. We’ve all worked to get where we’re at now and we’re here and we did it together.”

Smith loves Cleveland and Cleveland loves him. There are plenty of fans that hope he succeeds in his next endeavor. Smith wants to keep playing. He’s training and ready to join a contending team.

The Lakers aren’t interested in reuniting him with James, but the Houston Rockets are always open to adding three-point shooting. Smith could fit in well with James Harden and Russell Westbrook.

Things didn’t end well with the Cavaliers, but they rarely do in sports. Smith was a role player on the Cavaliers and he turned himself into a Cleveland star. That’s something he can embrace many years from now when his playing days are over.