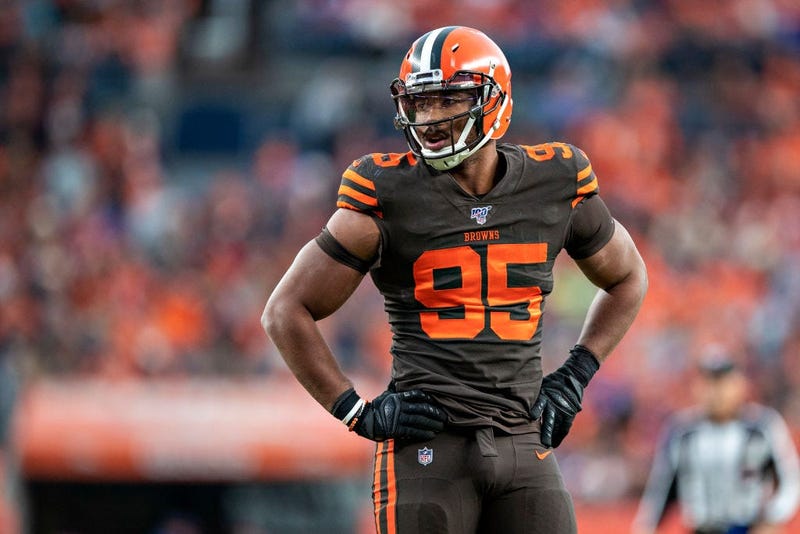 But not to defensive end Myles Garrett, who believes they have a big finish in them over the final 8 games.

“I don't see why we can't be 10-6,” Garrett said. “There's eight more games and that's eight more opportunities. I don't care what the previous record has shown, I don't care what they've said has happened before. You go out there with the right mindset and good amount of want to, you know what the hell you're doing, you have your fundamentals down, you can go out there and play with anybody. Those three or four plays can go either way and you get those to swing your direction, we can make a run for it.”

The Browns haven’t won 5 straight games in the expansion era and the last such streak came in 1994. The last 6-game streak came all the way back in 1972, so such a run would be historic.

It’s the lack of consistency play in and play out on both sides of the ball that have doomed what was expected to be an exciting season into one of utter failure.

Garrett has racked up 10.0 sacks this season, ½ a sack behind Buccaneers linebacker Shaquil Barrett.

“It's nice to be at the top of it. I think Shaq took the lead, but I'm trying to win,” Garrett said. “Whatever I have to do. If I have to get five sacks in the game, five TFLs, whatever role I have to fill for us to be in a good position to win or I have to win it my darn self, I'll do that. So whatever's required. If I'm in a position to make a big play, I'm going to go out there and do it.”

Garrett was added to the injury report Friday with a knee injury, but he was a full participant Friday and will play against Buffalo Sunday.

“It’s some bumps and bruises you get throughout the season, but nothing that’s going to stop me,” Garrett said.

Bandwagon jumpers – The Browns are looking for their first win at home this season Sunday afternoon and some fans have become frustrated with the slow start.

So how about winning one for the fans this week?

“I'm more worried about us winning than giving wins to the fans,” Garrett said. “It's always nice, but I'm worried about the guys in this room, that's who's going to stick with us through thick and thin.”

Garrett, who filed a police report after being punched by a fan downtown last month, has become wary of some fair-weather fans, which is why he’s keeping his focus solely within the locker room.

“The guys in our room I know aren't going anywhere and their heads aren't going to ever hang, they aren't going to ever bash on us and complain and feel like we need something different, they're confident in who's managing us, who's coaching us that we can win with the guys in this room and that will never change,” Garrett said. “Fans, that can't always be said and for the ones who've been with us through everything and who remain to be with us, we appreciate y'all and y'all help add fuel to the fire. We're trying to win for us as well as for y'all.”

They’ll play 5 of their final 8 at First Energy Stadium.

Stepping up and stepping in – With defensive end Olivier Vernon ruled out, Chad Thomas is expected to step in and start for the veteran Pro Bowler while Morgan Burnett replaces the released Jermaine Whitehead at safety in the secondary.

“It's definitely a big opportunity for me to come in and have more time,” Thomas said. “That's an opportunity I can't pass up. So just get in there and do what I've got to do, do my one-eleventh, basically do my job.”

Burnett is prepared to be tested by Bills starter Josh Allen.

“He has a strong arm,” Burnett said. “But I think another thing that jumps out at you is his athletic ability, how he’s able to extend plays with his feet and you see it time and time on film where he’s capable of putting the ball down, running to get a first down, or he can scramble around and you see him throw guys open. So that jumps out to me on the film.”

Not holding Hunt back – It appears that Kareem Hunt will be able to take on a full workload Sunday against the Bills according to head coach Freddie Kitchens.

“There are no restrictions,” Kitchens said. “We just need to continue to build Kareem’s endurance and some of that stuff kind of factors in.”

Hunt, who began practicing on Oct. 21, will make his debut after serving an 8-game suspension for multiple off the field incidents before the Browns signed him in February.

Close call – Tight end Rick Seals-Jones is questionable for Sunday’s game but after taking a direct shot to the knee last week at Denver, he admitted he feels fortunate to still be playing.

“Yeah, I thought it was over. I'm not going to lie,” Seals-Jones said. “But I took one [moment], then it kind of came back to life, and then I was like, 'Just get me up. Let me just try to walk on it, see what it feels like.' Then I got back there and the trainers did what they needed to do and we just went from there.”

Seals-Jones, who took the hit late in the second quarter of the 24-19 loss, did not practice this week after catching both of his targets against the Broncos for 12 yards.

“Hopefully that's the first and last,” Seals-Jones said of the hit. “But it's part of the game. You get caught sometimes. So it's part of it."

He has 9 catches for 155 yards and 2 touchdowns this season and will be a game-time decision against the Bills.

“Go out there, run some routes, see how it is. Cut on it,” Seals-Jones said. “We've been taking this week, kind of just getting it right, taking it slow, going day to day. So on Sunday we're going to go out there Sunday and see how it feels.”

Not ready – Offensive tackle Drew Forbes will not be activated in time to play Sunday against the Bills according to Kitchens.
Injury report – OUT: DE Olivier Vernon (knee), S Eric Murray (knee)