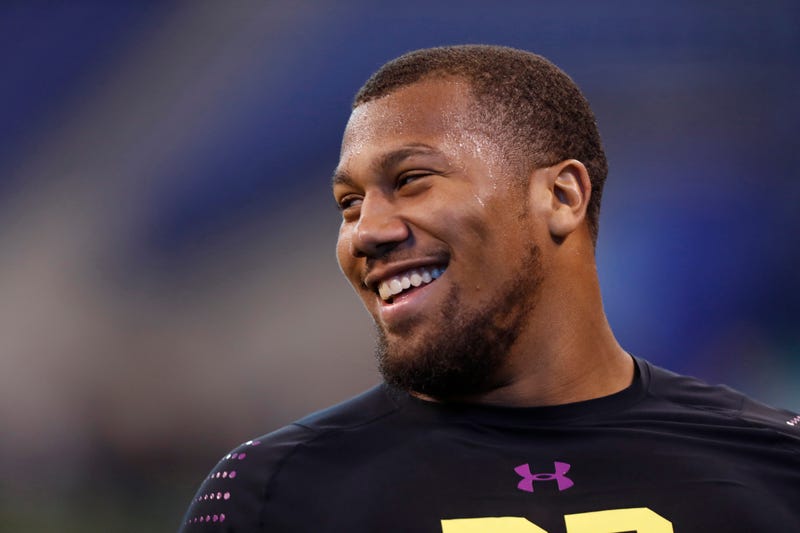 Chubb, who racked up 25 sacks over 3 seasons for the Wolfpack, is regarded as the best rusher in the draft class by many.

Could the Browns, who own two of the top 4 picks in the draft, take another defensive end high for a second straight year after drafting Myles Garrett No. 1 overall a year ago?

Chubb likes the thought of being paired with Garrett, who had 7 sacks in 11 games as a rookie last season for Cleveland.

“It could do a lot,” Chubb said Saturday of the impact he could have with Garrett. “Myles being so freakishly athletic and me being the guy I am, the player I am, learning a lot from each other, I can learn some stuff from him, he could learn some stuff from me. If the Browns decide to take us it would be very special.”

The Browns also selected Emmanuel Ogbah, who has 9 sacks in 26 games, in the second round of the 2016 draft.

Like Penn State running back Saquon Barkley, Chubb hopes he’ll be able to give the Browns something to think about and make their decision of what to do with their first round picks even more difficult.

“Saquon is a great player, a great athlete,” Chubb said. “I’m just going to go out there and show what I can do. I’m competing with everybody in this building of course but at the end of the day I can only control what I do.”

It is expected that the Browns will pick a quarterback with No. 1 selection, which Chubb understands.

“If a team doesn’t have a quarterback, they don’t really have anything,” Chubb said. “My job is to get after one of the best players on the field, one of the highest-paid players on the field. It changes the dynamics of the game. You see in the Super Bowl, sack-caused fumble ends the game. Take it back to when the Broncos won, Von Miller just going crazy in that game. Super Bowl MVP of that game.”

The question that always gets asked about defensive ends coming out of college is do they have enough moves as to not become predictable when going against the top offensive tackles in the game?

“I feel like I do but it’s definitely going to have to get fine-tuned because these guys, there’s no weak offensive linemen in the NFL,” Chubb said. “I understand whenever I start training to do the fundamentals and get into rookie minicamp and all that stuff I’ve got to completely understand…if I want to get a sack I’ve got to be on my 100 percent ‘A’ game.”