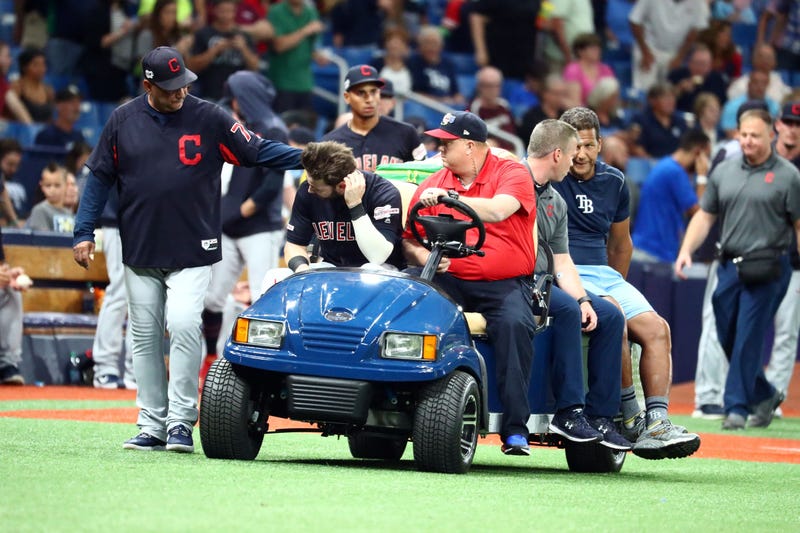 August 31, 2019 08/31/2019 1:15 am
CLEVELAND, OH — The Indians' injury woes continued on Friday night when left fielder Tyler Naquin was carted off the field after making a dazzling catch and crashing into the wall against the Rays at Tropicana Field.
Naquin was officially diagnosed with a right knee sprain and didn't put any weight on his right leg when he transitioned from the field to the cart.

Not sure what happened to Naquin but he's being carted off and it looks very very bad. Maybe broke his patella? pic.twitter.com/k28twGfoNT

The 28-year-old ran full-speed into the wall while he chased down a deep fly ball from Rays infielder Joey Wendle. Naquin caught the ball, but took an awkward final step before hitting the wall.

“’It sucks,” Shane Bieber said after the game. “Hopefully we can get him back as soon as possible. I don’t know what it is – we’ll probably find out in the next couple of days. We’re really just thinking of him and trying to be there for him. It’s not easy.”

Naquin missed 22 games in May with a left calf strain. He's been a bright spot for the Indians this season, posting a .288 batting average, 10 home runs and 34 RBI. He's second in the American League with 11 outfield assists.

Naquin underwent an MRI after the game. Manager Terry Francona declined to speculate about the severity injury in his postgame press conference.