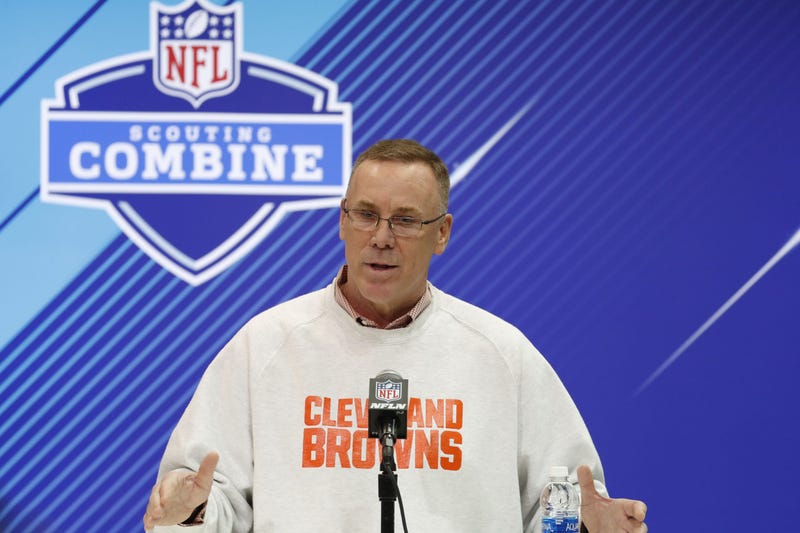 With the NFL Combine winding down here are some thoughts on the week in Indianapolis.

– Kirk Cousins is not going to be a Brown. Lets just get that out of the way and close the book on it now. The word around the league is that there just isn’t much mutual interest between the Browns and Cousins.

– Saquon Barkley, Bradley Chubb and Minkah Fitzpatrick appear to be better NFL prospects than any of the top four quarterbacks the Browns are considering at No. 1. This is the corner you paint yourself into when you pass on franchise-altering quarterbacks in back-to-back drafts. Let this be a lesson learned: when a quarterback is there for the taking, you don’t sell him for a bunch of draft picks. You pick him and build around him. Otherwise you end up 1-31 and have to reach on a QB while passing on better overall talent in subsequent years.

– After a week in Indianapolis, none of the four quarterbacks moved the meter in either direction and that is not necessarily a good thing. They are who we thought they were and the questions that surround each of them remain.

– The concerns about Josh Rosen’s personality are not made up. Teams are doing a deep dive to find answers. Rosen showed once again Saturday that his surgically repaired right shoulder is just fine but it is unclear the impact his concussion history will have on the evaluation process.

– Wyoming quarterback Josh Allen has the size, arm and looks the part, but we’ve seen that movie before. Everyone knew Allen had a big arm so Saturday’s performance should not have surprised anyone. It also shouldn’t sway the evaluation process in his favor either.

– Baker Mayfield comes off as cocky but he just exudes confidence. He spent the week trying to show teams he’s mature enough to be the face of their franchise but talent really is a non-issue with him. Steve Young, Drew Brees and Russell Wilson are the exception to the rule when it comes to the quarterback measurables and Mayfield could very well be too. But none of those three ended up as the first pick in the draft.

– While we’re on the subject of Mayfield, can we please end the Johnny Manziel comparisons? Please? Other than size, the comparisons really should end there. Mayfield came to Indianapolis to show teams who he is – on and off the field. Manziel spent his time rehearsing and regurgitating the right answers to pass the test and ultimately was successful in fooling the Browns. Mayfield does not have a substance abuse problem and his style of play in college is much more conducive to the NFL game than Manziel’s ever was.

– USC’s Sam Darnold appears to be the safest bet, but the 20-year old is a projection. Projections and safe bets are a dangerous proposition in the NFL when you’re committing the top pick in the draft on a player.

– John Dorsey has the unenviable task of picking between Rosen, Allen, Mayfield and Darnold. His selection on April 26 will define his legacy with the Browns. Good luck with that.

– Dorsey made it clear this week in Indianapolis that he does like the quarterback class this year despite the questions about each of the top candidates.

– Louisville’s Lamar Jackson is an intriguing prospect. There were mixed reviews regarding his on-field workout on Saturday so when in doubt always go back to the tape. He was electrifying for the Cardinals and there are those around the league that believe his ability to make plays with his arm and feet would make him dangerous to defend. The question with Jackson is just how many hits can his body absorb while still being able to play at a high level? Although he is not in consideration to go No. 1 overall at this point, it wouldn’t be surprising if the Browns had him on their radar for the second round – assuming he lasts that long.

– While it might seem unlikely it is possible that the Browns could steal a page from Washington’s playbook and draft two quarterbacks in April. After trading up to select Robert Griffin III with the second overall pick in 2012, Washington also picked Kirk Cousins in the fourth round – No. 102 overall. Griffin is out of football while Cousins is about to cash in this offseason after taking home just under $44 million the last tow seasons thanks to the franchise tag.

– Some have joked this week the Browns should pick quarterbacks with the first, fourth and 33rd picks in the draft. While it sounds like a pretty good idea in theory, that creates all kinds of roster problems come time to cut down to 53. Plus the Browns have massive holes at corner, free safety and receiver to fill.

– NC State’s Bradley Chubb is this year’s Myles Garrett. But there is little chance the Browns are drafting defensive ends with the top pick in back-to-back years, right?. Chubb certainly made his case Sunday with an incredible workout and if DOrsey stays true to his best player on the board mantra, he might. Check that, he should because Chubb might be the best player in the class. If the Browns pass on him at 1, not many expect him to be there at 4 either.

– If the draft were held today many believe the Giants will take a quarterback second and the Colts will take Bradley Chubb third leaving the Browns to choose between Saquon Barkley and Minkah Fitzpatrick at 4. It’s not the worst position to be in if you’re John Dorsey and while that decision is just as difficult at choosing the best QB of the class, the dividends from the fourth pick this year project to be much more significant and immediate than the first.

– Once again the talk in Indianapolis was all about the Browns, except the narrative was a bit different. There was less how are the Browns going to screw it up this year talk than heard in years past. John Dorsey, Alonzo Highsmith and Eliot Wolf have the respect of their peers which is very evident and the common theme from many was: if anyone is going to figure it out in Cleveland, it’s those three.

– While the combine has been turned into a made-for-TV week of entertainment, the most important elements of the event are not even seen by the media or fans – the medical examinations and interviews. While the importance of the workouts you can watch at home shouldn’t be dismissed, they rank lower than many lead you to believe.

– Shaquem Griffin’s 20 reps on the bench press while wearing a prosthetic to act as his left hand was one of the more memorable and inspirational things seen at a combine in Indianapolis. He then ran an unofficial 4.38 in the 40 Sunday and the UCF linebacker impressed in his workout. Throughout his life Griffin has tried to prove he belongs on a football field and there will be a team come April that once again agrees with him.

– Danny Shelton’s future is entering undecided waters. The Browns have until May 3 to pick up the fifth year option on his contract. There’s a chance they could trade Shelton, who was the 12th overall pick in 2015, and completely clear the decks of former general manager Ray Farmer’s four first-round draft picks.

– Although John Dorsey met this week in Indianapolis with Isaiah Crowell’s agent, don’t bet on Crowell returning in 2018.