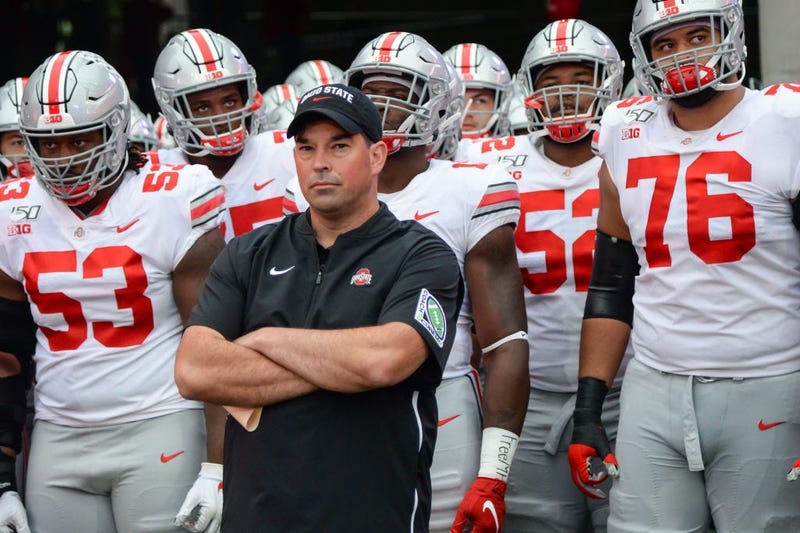 Following Saturday Night's 48-7 blowout of Nebraska in Lincoln, veteran Play-By-Play announcer Chris Fowler took to Twitter for his impressions of the 5-0 Buckeyes:

"Go ahead. Try to find a weakness so far in @OhioStateFB..I can't. Be skeptical about their competition through 5 games, I get it. But talent, depth, hunger, and a VERY bright, driven staff are hard to deny. Gave the Huskers a harsh reality check and sent the B1G loud message."

My, what a difference a year makes.

It started with the coaching staff, led by the legendary Urban Meyer, who began the season serving a three game suspension for his handling of domestic violence allegations involving Zach Smith, the Wide Receivers coach for the Buckeyes. Smith, the grandson of another legendary figure in Buckeye lore, Earle Bruce, had been the subject of an investigation into many troubling incidents involving his then-wife, Courtney, and extended into countless missteps in job performance. Smith would be fired, Meyer would be handed the suspension, and Ryan Day would take over on an interim basis in Meyer's absence.

Now throw in serious health issues for Meyer, including an arachnoid cyst on his brain leading to debilitating headaches and overall fatigue, and you had all the makings for a very inauspicious beginning to the 2018 campaign.

Make no mistake, the Buckeyes would win those three games and ten more for good measure, largely because of a culture cultivated by Meyer. He is simply a master at turning around programs in a hurry, and doing so with relentless recruiting while building a foundation built on loyalty, respect, and accountability.

But that strong foundation revealed a few cracks over the past couple of years. Inexplicable blowout losses on the road to Iowa and Purdue, along with an alarming number of back-breaking plays given up by the defense headed up by Meyer's longtime friend and colleague, Greg Schiano. A lack of improvement and progress throughout the season suggested ineptitude at best, stubborn at worst. Throw in an offense that often times looked out of sync and lacked (gasp) physicality, and you had fans and administration unsure of what to expect from their beloved Buckeyes.

Fast forward to today.The Buckeyes are 5-0 (not a big surprise or change from previous years) under Day, who was given the reins after Meyer announced he would retire after 2018. But it's the way they have garnered those 5 victories that have folks across the country taking notice.

Ohio State has outscored its opponents 173-22 in the first half, topped 500 yards for the fourth consecutive game and has allowed fewer than 300 yards of total offense in each of its first five games.

So much for sluggish starts that plagued the Bucks over the past two seasons.

While Day has kept much the same in terms of Meyer's culture and recruiting practices, he knew the status quo would have the Buckeyes on the outside-looking-in as far as the National Championship picture.

He immediately brought in 5-star Quarterback Justin Fields from Georgia after Fields was unable to dethrone Jake Fromm as the Bulldog's signal caller. Fields has been a combination of J.T. Barrett and Dwayne Haskins and as advertised relating to the hype. While Meyer advised not calling plays with all of the duties required of a Head Coach, Day has called the plays and clearly has a knack for doing it. A deep, physical offensive line in front of Fields and RB J.K. Dobbins has defenses playing a dangerous game of pick your poison.

But the defense, and more specifically those calling the defense, is where Day has really put his stamp on this team's resurgence. Where loyalty may have clouded a necessary change for Meyer, Day moved swiftly and effectively. And it didn't hurt that in doing so, he weakened Harbaugh's club in Ann Arbor.

Day plucked Defensive Coordinator Greg Mattison and Linebackers coach, Al Washington from Michigan. Throw in Secondary guru Jeff Hafley and his NFL pedigree to assist Mattison with calling the defense, and you have a unit allergic to allowing big plays while wreaking havoc on opposing offenses.

While we just turned the calendar to October and the season is just five games old, the Buckeyes still have plenty to prove. But in those five games, Ohio State has earned a place in conversations that include the likes of Alabama and Clemson. Fair or not, those are the expectations on Day and his program.

And as Fowler and others from across the country have noted, this year's Ohio State team deserves that recognition. An eye-test that last year occasionally revealed cloudy results, has come back damn near perfect through September.