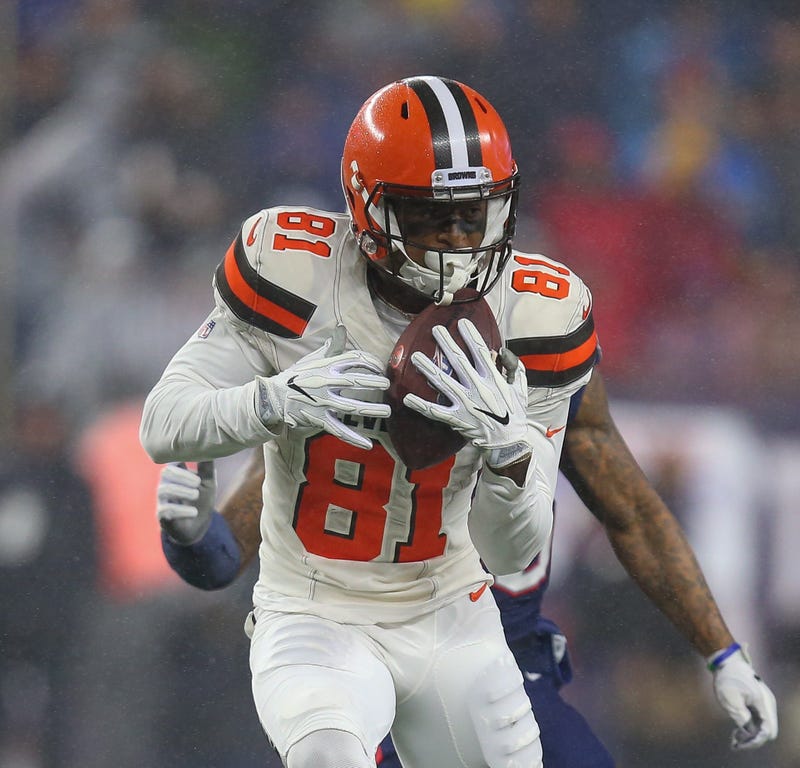 October 31, 2019 10/31/2019 8:29 pm
Berea, Ohio (92.3 The Fan) – On Monday Browns head coach recommended we talk to Rashard Higgins about the situation that led to him not playing against Seattle and just 14 snaps against the Patriots when asked about the receiver’s playing time.

Thursday, the opportunity presented itself, but Higgins declined comment.

"We're getting ready for Denver, so that's all I want to talk about -- the Denver game,” Higgins said. “Y'all got some questions about the Denver game?”

Once again Higgins indicated that he is 100% healthy and able to play.

Higgins was supposed to be healthy from a knee injury suffered in the 43-13 Week 1 loss to Tennessee for the Oct. 13 game against Seattle. He said publicly he was ready to go and was active yet didn’t see the field.

A few days after the game Higgins told reporters he didn’t know why he didn’t play.

Kitchens originally said they had a package of plays ready, but they just didn’t get to them against the Seahawks. The story then switched to Higgins had just returned from the injury and it was best to hold him back raising questions about what was going on behind the scenes.

“It's been difficult just not being out there with my brothers, being hurt, you know? Obviously missing them few games, but now I feel like I'm back and ready to give my all,” Higgins said.

Higgins was targeted twice and caught 1 pass for 2 yards against New England but had a 26-yard completion wiped out midway through the fourth quarter due to an offensive pass interference penalty.

He has just 3 catches for 48 yards this season.

It appears now that Kitchens is choosing between him and Antonio Callaway for reps at the No. 3 receiver position.

“I guess so,” Higgins said.

Fans continue to ask about Higgins, considering the chemistry he developed last year with Baker Mayfield. He caught 39 passes for 572 yards and 4 touchdowns. His red-carpet celebration became one of the more unique post touchdown displays in the league.

“[I] Just be like, man the carpet is still red, big dawg,” Higgins said. “Carpet is red. It’s ready, Stanley steamed. Man, but yeah, I get those questions all the time.”

Everyone is anxiously waiting for him to finally roll it out in 2019.

“I think he does some great things, Allen does,” Wilks said. “Very smart. You can tell he does a good job at protecting the ball. He does not hold onto the ball. He gets rid of the ball. Very athletic out in space. He can buy time with his feet and very accurate with the ball, as well.”

Broncos head coach Vic Fangio was candid this week when asked on a conference call with Cleveland reporters what he’s seen from the fourth year QB in practice.

Wilks expects Fangio and the Broncos to work off the run instead of relying on Allen’s arm come Sunday.

“I still think their approach is going to be – because they have two dynamic running backs – they are going to try to run the football and create the play action off of it, which I think they do a great job of,” Wilks said.

Air up there – The mile-high altitude Sunday should help punter Jamie Gillan and kicker Austin Seibert with hang time and distance – not that they need it – but special teams coordinator Mike Priefer doesn’t want them making the same mistake he’s seen other kickers and punter make in Denver.

“We have two strong-legged kicks with our punter and kicker with Jamie and Austin. I think if they go out there and just do what they have been doing and kick at a high level, the altitude will actually help them in rather hurt them like it does to other guys because it gets in their head a little bit.”

So how much does the rarified air help a kicker and punter?

“I would imagine it is probably around 5 yards and the hang time for a punter could upwards of another half a second of hang time,” Priefer said. “I have no scientific proof of that – I am not smart enough to figure that part out. It has been my experience for being out there for two years that it is amazing how an average punt becomes a 5.0 punt because of the altitude.”