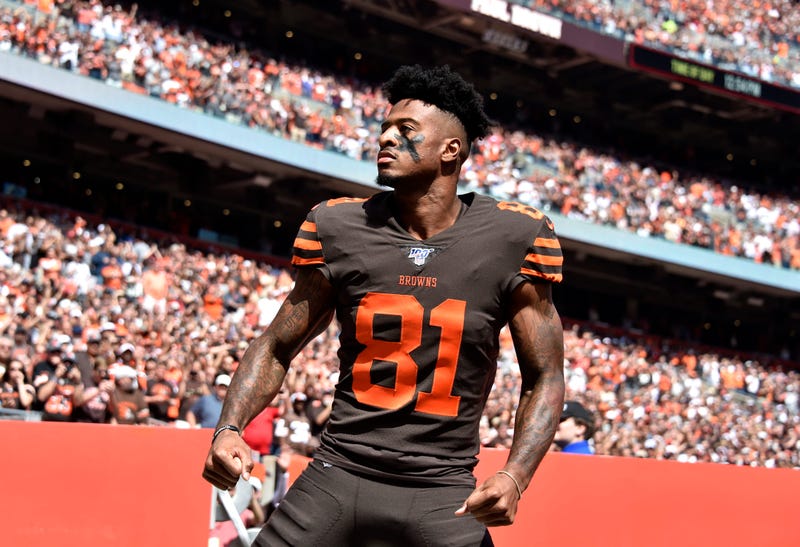 He didn’t play a snap prompting questions about if Higgins was in head coach Freddie Kitchens’ doghouse?

“No, he is not,” Kitchens said Monday.

Antonio Callaway, fresh off not even being able to line up properly against San Francisco, got the third receiver reps against the Seahawks – 47 of them that resulted in 4 targets, 2 catches and 22 yards.

So why was a healthy Higgins a big DNP Sunday?

“Last week was [Higgins’] first week truly back, and I thought Antonio had a good week of practice,” Kitchens said. “Hig should have played some in the game yesterday, but the situation didn’t arise where he was in the game. We were moving the ball with three wides and one tight end.

“We had a package… We just didn’t use that package. We didn’t feel like we needed to.”

Higgins, who has caught 41 passes for 618 yards and four touchdowns in 14 games from Mayfield, suffered a knee injury in a 43-13 loss to Tennessee in Week 1.

“I thought an extra week [would help],” Kitchens said. “He was there for a certain package of plays. We didn’t get to that package and he didn’t play.”

Rogue 1 – Kitchens said Monday that he saw a route run by a receiver that wasn’t even in the playbook when he reviewed the game film.

“One route [Sunday], I have no idea where that route came from, and it is one of our staple routes,” Kitchens said. “We need to do a better job of doing what we are supposed to do.”

Kitchens declined to provide any specifics about the play or player responsible.

Give and take – Lost in the worry over Baker Mayfield’s 11 interceptions and the Browns’ 14 turnovers is the fact that the defense isn’t taking the ball away.

“We have to get turnovers. I think we had one turnover in the last two games,” cornerback TJ Carrie said. “That is something that in this league and in this game that you have to create extra opportunities for your offense. When you get turnovers, it definitely is a big momentum swing for the team. It definitely allows the offense to get the ball back and have more opportunities. Those are the things that we are lacking that I feel right now.”

Through 6 games, the defense has collected 4 interceptions and 4 fumble recoveries giving the Browns a -6 in the turnover ratio, and Carrie knows that’s not good enough.

“If we can’t get the turnovers needed to give our offense another chance, it makes it hard to play great ball all through the game,” Carrie said. “We definitely have to continue to work on that in practice day in and day out and have that mindset that when we go into the game and we are in every situation that we are going to strip, hit the ball and whatever we can do to get it out.”

No regrets – Kitchens stands by his decision to save his timeouts and try to cram in 2 possessions at the end of the first half, despite the decision blowing up in his face in spectacular fashion.

Baker Mayfield threw his second interception in the diretion of Jarvis Landry with 1:36 remaining in the half, which the Seahawks turned into 6 by driving 88 yards in 1:07 cutting a 20-12 lead to 20-18 before the half.

“I feel like I ran a pretty good route, had an opportunity, got inside, I just didn’t make the play,” Landry said. “I’ve just got to make the play.”

Had Kitchens played it cool and ground the clock down, the Browns could’ve extended the lead to 23 or 27-12.